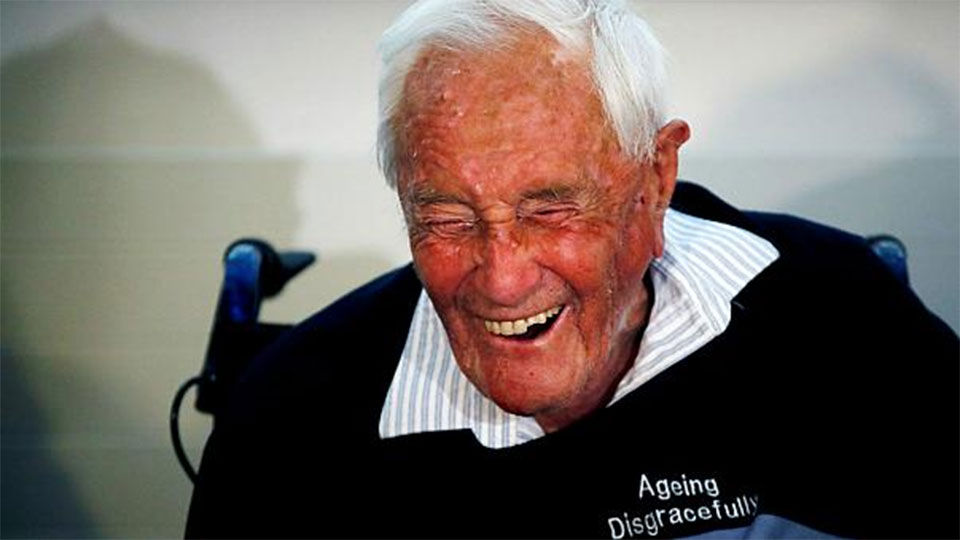 May 11: Australia’s oldest scientist, David Goodall, has ended his own life at a clinic in Switzerland, surrounded by family and while listening to Beethoven’s Ode to Joy.

The British-born 104-year-old professor was forced to travel on a one-way ticket from his home in Western Australia to Switzerland where liberal assisted dying laws allowed him to end his life legally, in contrast to Australia where it remains forbidden.

In his final hours, Goodall enjoyed his favourite dinner: fish and chips and cheesecake. And in his final minutes, he listened to Beethoven’s Ninth Symphony, best known for its last movement Ode to Joy, reportedly passing away shortly after the piece of music finished.

Family members were with Goodall until his death, which was preceded by formal paperwork that visibly frustrated the scientist, who said: “What are we waiting for?”

He was accompanied to the clinic of the Swiss assisted dying organisation Life Circle by Dr Philip Nitschke, the founder of the Australian right-to-die group Exit International.

To end his own life, Goodall had to turn a wheel that allowed a lethal infusion to flow into his bloodstream through a cannula on his arm. Nitschke said the professor did this “after answering questions which said he knew who he was, where he was and what he was about to do, and he answered these questions with great clarity.

“In fact his last words were: ‘This is taking an awfully long time!’”

Assisted dying, where patients take the final action to end their lives, is legal in Canada, the Netherlands, Luxembourg, Switzerland and parts of the US.

Goodall, a botanist and ecologist, had been campaigning for his home country Australia, where the state of Victoria is planning to legalise assisted dying for the terminally ill from 2019, to follow suit.

“What I would like,” Goodall said, “is for other countries to follow Switzerland’s lead and make these facilities available to all clients, if they meet the requirements, and the requirements not just of age, but of mental capacity.”

Though Goodall was not terminally ill, he had seen his eyesight and mobility deteriorate considerably in recent years and said that his life stopped being enjoyable “five or 10 years ago”.

The scientist requested that his body be donated to medicine or, if that were not possible, that his ashes be scattered locally in Switzerland. He wished to have no funeral, remembrance service or ceremony, since he had “no belief in the afterlife”.

Goodall flew from Perth, where his daughter, son and grandchildren also live, to France last week to see relatives before arriving at the clinic in Liestal, near Basel. His case caused controversy in Australia, with doctors in Perth at one point threatening to stop him flying to Switzerland.

He spent his final full day exploring Basel University’s botanic gardens with three of his grandchildren, who said they were proud of his bravery in the face of great public attention and were glad he would die on his own terms.

At his last press conference on Wednesday, Goodall was in good spirits and sang a few bars of Ode to Joy while wearing a jumper printed with the words “ageing disgracefully”.

He said he would have preferred to die in Australia and previously voiced his resentment over the country’s laws.

“Luckily my family who are in various parts of Europe and America have rallied round and come to see me, and I welcome the opportunity to see them, which I probably wouldn’t have had if I hadn’t pursued this Swiss option,” he told journalists.

He appeared bemused by public interest in his case. “At my age, or less than my age, one wants to be free to choose the death when the death is at an appropriate time,” Goodall said.

Exit International, which helped Goodall make the trip, said it was unjust that one of Australia’s “oldest and most prominent citizens should be forced to travel to the other side of the world to die with dignity”.

“A peaceful, dignified death is the entitlement of all who want it,” it said on its website on Monday. “And a person should not be forced to leave home to achieve it.”

However, the Australian Medical Association’s president, Dr Michael Gannon, says he was concerned that the “suicide of someone who’s aged 100” was being celebrated.

“What is the age at which we no longer celebrate people continuing life?” he asked. “People like Dr Goodall make a decision based on nothing more than they’ve decided there’s nothing more to live for. I think that’s a dangerous line to cross.”

“I have serious concerns about a community where we make arbitrary decisions about whose life is valuable enough to continue and whose should be ended under the law.”

An honorary research associate at Edith Cowan University in Perth, Goodall produced dozens of research papers and continued to publish after his retirement. In 1979, he was editor-in-chief of the multi-volume Ecosystems of the World.

He made international headlines in 2016 when he was declared unfit to be on campus. After an uproar and support from scientists globally, the decision was reversed.

Policeman risks his own life to save voters from bomb explosion

DANG, June 29: A policeman has displayed unparalleled courage to save the lives of voters from imminent bomb explosion during the... Read More...

Taking matters into his own hands

Of all the calls Deepak Silwal usually receives many are matters of life and death. In the last six years... Read More...