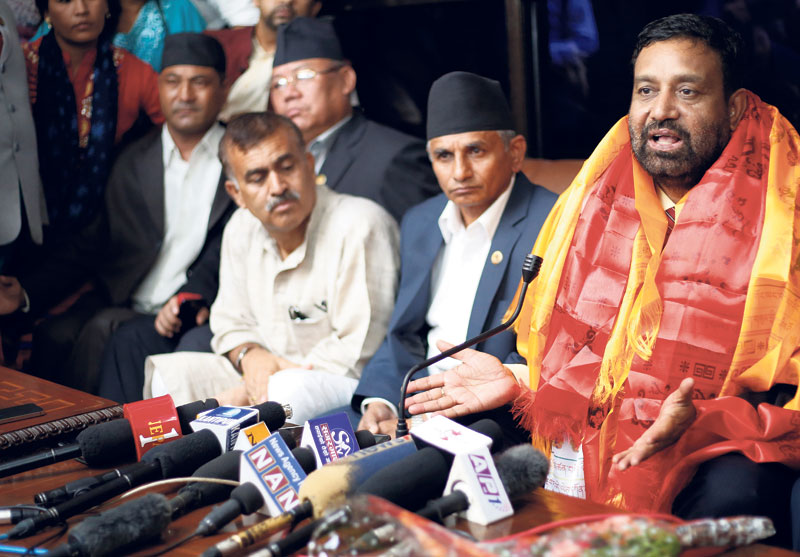 Deputy PM and Home Minister Bimalendra Nidhi addresses a press conference at the Tribhuvan International Airport after his return from a four-day visit to India, Tuesday. (Dipesh Shrestha/Republica)

According to a minister, the government has started preparation for the visit on the date proposed by India. But a formal decision about the visit will be taken by the next cabinet meeting.

During India visit of Deputy Prime Minister Bimalendra Nidhi, India had proposed September 16 for bilateral talks between the prime ministers of the two countries.

According to a cabinet source, officials from both countries have started work for finalizing the agenda items for the meeting between the two prime ministers.

"DPM Nidhi said that the Indian side is eager to welcome Prime Minister Dahal. So, as India has also proposed the visit date, the government will now make preparations for the prime minister's visit," Minister for Law and Justice Ajay Shankar Nayak told Republica.

"The prime minister will hold discussion with leaders of major political parties regarding the visit and agenda items," Minister Nayak told Republica.

Likewise, DPM Nidhi informed the cabinet that Indian President Pranab Mukherjee will visit Nepal only after Prime Minister Dahal's visit to India, which will be followed by President Bidya Devi Bhandari's visit to the southern neighbor.

During his India visit, DPM Nidhi had called upon Indian Prime Minister Narendra Modi, Minister for External Affairs Sushma Swaraj, Indian Home Minister Rajnath Singh and other Indian leaders. The focus of DPM's visit was to create favorable environment for high-level exchanges between Nepal and India.

The cabinet meeting later concluded that the recent visits by Deputy Prime Ministers Krishna Bahadur Mahara and Bimalendra Nidhi to China and India respectively have been fruitful.

The meeting said the two visits by the deputy prime ministers have taken Nepal's relations with the two neighbors to a new high.

At the meeting, DPM Krishna Bahadur Mahara had also briefed the cabinet about his last week's China visit. He informed the cabinet that Chinese President Xi Jinping will visit Nepal but the Chinese side has not fixed any date.

"DPM Mahara said that the Chinese president may visit Nepal during his India visit to attend the upcoming BRICS summit in September," said a minister.

Kathmandu, Sept 11: Prime Minister Pushpa Kamal Dahal has said that he has taken his upcoming visit to India as... Read More...

KATHMANDU, Aug 19: It is confirmed that Indian President Pranab Mukherjee will visit Nepal in the near future. ... Read More...