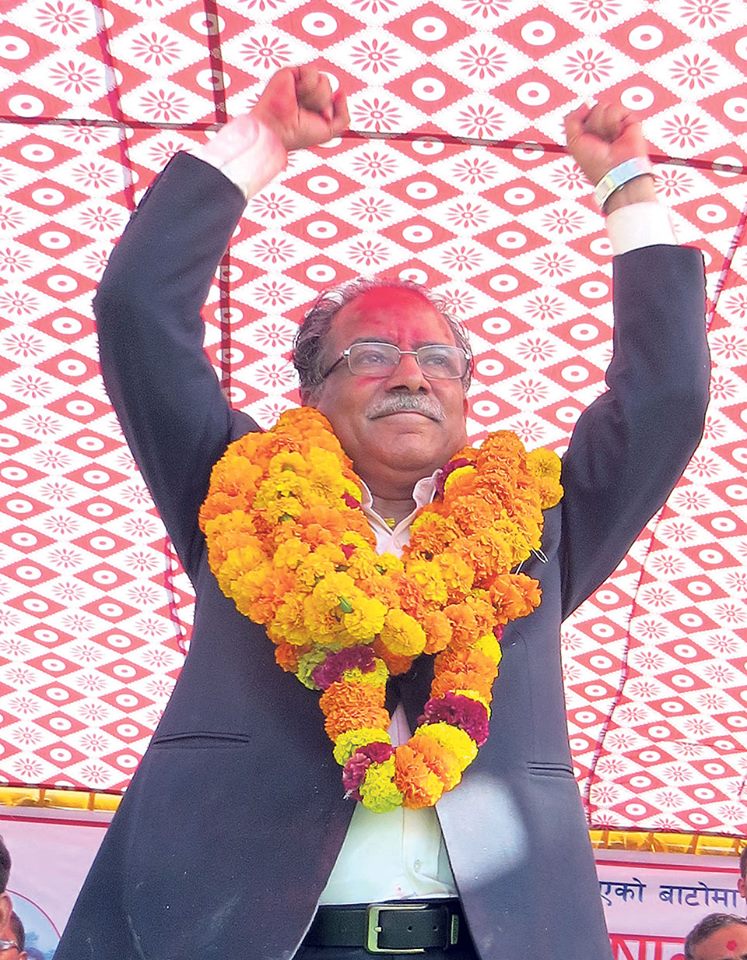 CHITWAN, Nov 5: CPN (Maoist Center) Chairman and former prime minister Pushpa Kamal Dahal has said that the  killing of 38 people in the detonation of a bomb against a moving bus at Badarmudhe in Madi, Chitwan district on June 6, 2005 was the biggest mistake committed by the Maoists during their 10-year insurgency .

Dahal was addressing an election rally convened at Madi itself, the area where the Maoists bombed the bus 12 years ago.

The locality  lies within the constituency that Dahal is contesting in the upcoming parliamentary elections. He had reached  Madi  five years ago also, by helicopter, to inaugurate a trade fair. But he couldn’t stay there even for a few hours because of security reasons.

On Saturday, Dahal spent at least four hours at Basantapur Bazar. However, he didn’t visit  Badarmudhe,  the spot where the Maoists bombed the bus. It lies just 1.5 kilometers from Basantapur.

He also did  not meet the victims of the Badarmudhe attack. He said his party was ready to take action against anyone if the Truth and Reconciliation Commission (TRC) found them guilty in the incident.

“I had  issued a statement immediately after the incident saying that it was the biggest mistake committed during the 10-year people’s war. I promise to take action against those found to be involved,” said Dahal.  “We are ready to abide by any instructions given by the TRC.”

He was quick to add that it was the responsibility of the TRC to investigate  cases of serious human rights violation committed by both the Maoists and the state.
“We have been consistently saying this to the international community also, including the United Nations.  I repeat that we are ready to punish those found involved in grave human rights violations,” he added.

Victims doubtful
However, those injured in the bomb blast and the kin of those killed  were not persuaded by Dahal’s assurances.

“Immediately after the incident, Dahal had promised to visit Madi, mainly to make an apology. But he hasn’t apologized  so far. So there is no strong ground for believing in his promises,” said Krishna Prasad Adhikari, president of the struggle committee of the victims of the Badarmudhe incident.

Maoist leader Amik Sherchan held a meeting with representatives of the struggle committee  Saturday morning to create a favorable atmosphere for Dahal’s visit. The victims’ committee handed over a letter to  Sherchan  containing  12 demands.

In the letter, they have demanded that the TRC be allowed to work independently and that the victims  be provided  reparations and other facilities. They have also demanded the construction of  a monument in memory of those who lost their lives in the bomb attack.

Addressing the gathering at Madi, Dahal said he was ready to address the victims’ demands.

KATHMANDU, Nov 23: A condolence meeting was held on the fifth day of the demise of Prakash Dahal, son of CPN... Read More...