Dahal stresses unity among parties to steer country toward prosperity 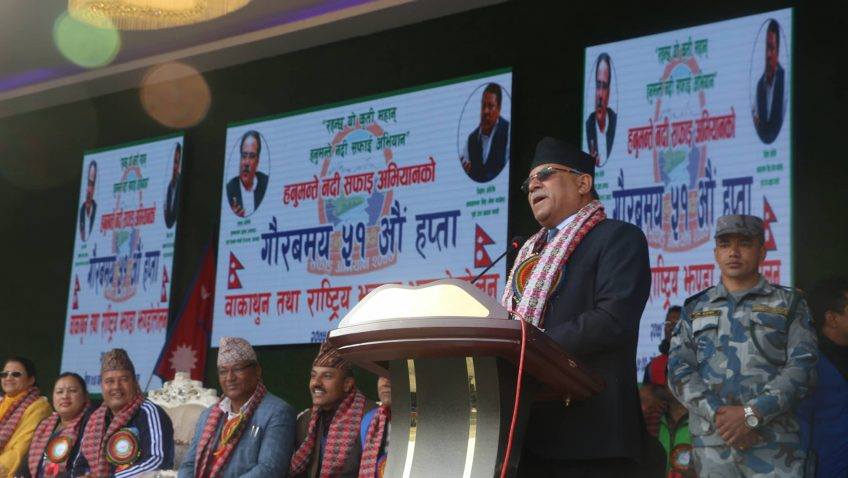 KATHMANDU, Feb 16: Co-chairman of ruling Nepal Communist Party (NCP) Pushpa Kamal Dahal on Saturday stressed the unity among the political parties to steer the country toward the path of development and prosperity.

Addressing a function to mark the 51th day of Hanumante River clean-up campaign in Bhaktapur, Dahal was of the view that the unity among the political parties would be instrumental to steer the country toward development and prosperity.

"We (political parties) worked together in the peace process, later on in the constitution-making and now time has come to join hands for steering the country toward the path of development and prosperity. I believe that we can overcome any kind of challenge for the good of the country if there is unity among the political parties," Dahal said.

Dahal, who is also the former prime minister, said that he would go to people with a new vigor.

Praising the clean-up campaign, Dahal said that people's active participation in the campaign has given a positive message to the entire country for the nation building process. "The road to prosperity is not so far if we really worked together with new vigor," Dahal said while urging the political parties.

All parties' unity must for social development: DPM Pokhrel

TULSIPUR, June 20: With the successful conclusion of the filing of candidacies a day ago, the local polls slated for June... Read More...

Central Committee of the CPN (US) meeting today
38 minutes ago