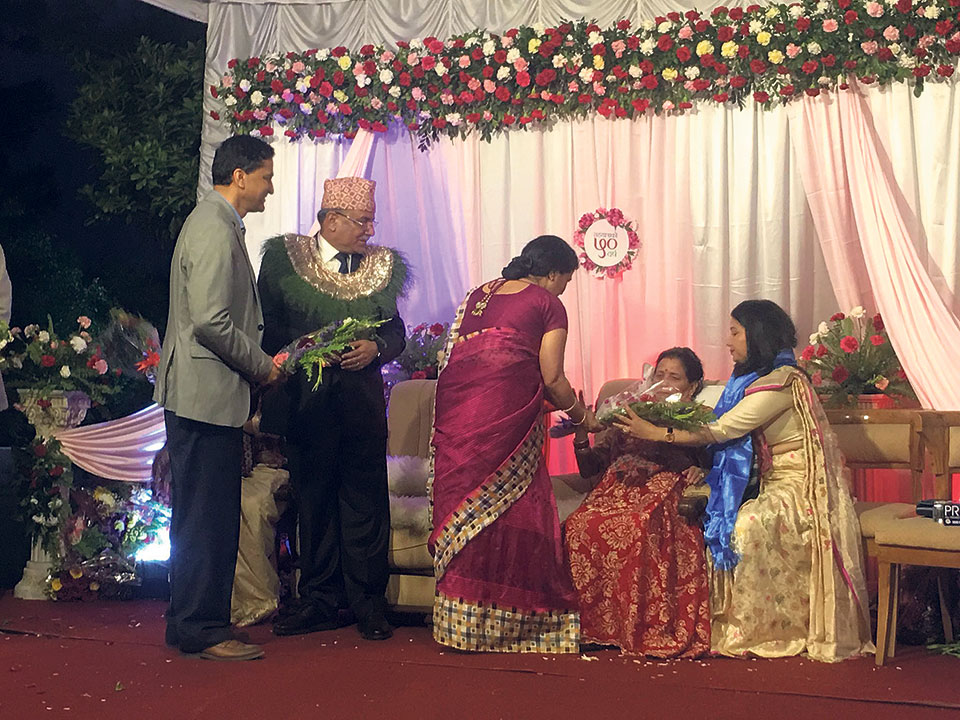 KATHMANDU, May 11: In what smacks of crony capitalism at work, ruling Nepal Communist Party Chairman Pushpa Kamal Dahal has hosted a grand reception at the house of Niraj Gobinda Shrestha, one of the former owners of the Ncell telecommunications company. The party was organized on the occasion of Dahal and his wife Sita's 50th wedding anniversary.

Ncell stands accused of not paying over Rs 39 billion in capital gains tax (CGT) even years after its owners sold their stakes to Axiata and other companies.

The Supreme Court had ruled that the private telecommunications company should pay billions more in CGT to the government. Ncell, however, filed an appeal claiming that the tax assessment by the government's Large Taxpayer Office (LTO) was not proper. The LTO had required the company to pay the tax amount within seven days after it fixed the amount still due. The case is now sub-judice at the apex court.

Dahal's lavish party, which was attended by most of the who's who in town including Vice President Nanda Bahadur Pun, top ministers and party leaders, lawmakers and other notables, was organized at Shrestha's sprawling 18 ropani estate in Thecho, Lalitpur. The NCP top gun has chosen the businessman's house for the wedding anniversary bash at a time when the company the latter was associated with is knee deep in one of the biggest tax disputes the country has seen. Leaders of the ruling parties have raised serious questions about the apparent intimacy between someone at their helm and a businessman shadowed by a tax scam. Soaltee Crowne Plaza catered the reception.

Speaking on condition of anonymity, some from Dahal's own party said they felt uncomfortable when they came to learn where the party was being held. They said this could be a test for Prime Minister KP Sharma Oli's commitment to 'zero tolerance for corruption' .

Informed sources said Dahal's family had taken refuge at Shrestha's house after the devastating earthquake of 2015. Shrestha, who has been living abroad, arrived back in Kathmandu just a few days before Dahal's wedding anniversary, said the sources.

It is learnt that Shrestha decided to go to Belarus and Cyprus after the apex court gave continuity to a short-term stay order on CGT collection from Ncell .

Shrestha had a 20 percent stake in the telecommunications company and he sold out to Bhavana Shrestha when the international company TeliaSonera sold its stake to Malaysian company Axiata three years ago. The government hasn't been able to collect the CGT it claims on the transaction. Dahal has been accused of supporting businessmen evade the tax.

Ncell and its parent company insist that they are liable to pay only a remaining amount of Rs 14.36 billion and that they are not responsible for the interest and other charges.

The Thecho party has lent credence to allegations that Ncell has been supported by top political leaders and other power centers in tax avoidance. The politicians have been accused of double standards .

“Even at the reception, some party leaders were seen whispering to each other about the venue and the opulence,” a senior NCP leader said adding, “I am finding it awkward to comment, given my affiliation with the same political party .”

NCP sticks to its stance on Venezuela

KATHMANDU, Feb 5: The Nepal Communist Party (NCP) on Monday said it stands by its stance denouncing US ‘interference in Venezuela’s... Read More...

Flood sweeps away a vehicle in Dang
9 hours ago