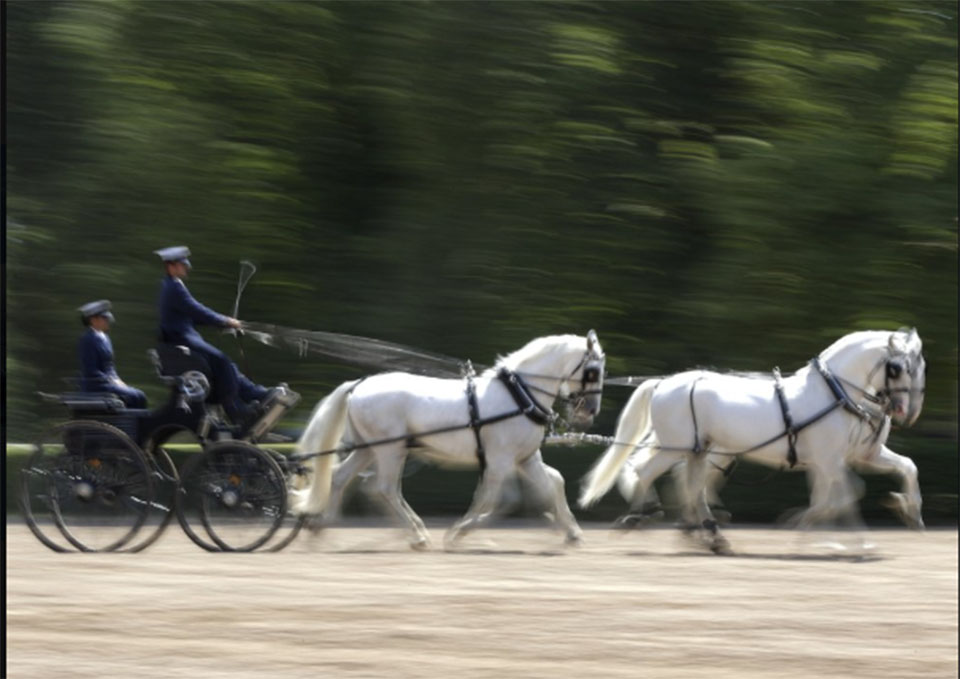 In this photo taken on Thursday, July 11, 2019, horses pull a carriage at a stud farm in Kladruby nad Labem, Czech Republic. UNESCO this month added a Czech stud farm to its World Heritage List, acknowledging the significance of a horse breeding and training tradition that has survived centuries. Founded 440 years ago to breed and train ceremonial horses to serve at the emperor’s court, the National stud farm and its surrounding landscape have kept its original purpose since. (AP Photo/Petr David Josek)

KLADRUBY NAD LABEM, July 16: A Czech stud farm founded 440 years ago to breed and train ceremonial horses to serve at the Habsburg emperor’s court has been added to UNESCO’s World Heritage list, acknowledging the significance of a tradition that has survived for centuries.

The National stud farm, located in the town of Kladruby nad Labem 90 kilometers (56 miles) east of Prague, is the first stud farm on the UNESCO’s list. Here’s a look at it:

The farm officially started in 1579, when Emperor Rudolf II of the House of Habsburg gave an imperial status to an original stud established by his father, Emperor Maximilian II. The famed regular visitors to the site, which also has a small chateau and a church, included Emperor Franz Joseph I and his wife Elisabeth of Bavaria.

The stud farm survived wars and a devastating 18th-century fire until the end of the Austro-Hungarian Empire in 1918, when the newly established Czechoslovak state took over. That threatened its existence, since anything linked to the former empire was unpopular in Czechoslovakia. Yet somehow the horse breeding tradition weathered both that shift and 40 later years of communist rule.

In 2015, the whole site underwent a major renovation with European Union funds.

The Kladruby site occupies 1,310 hectares (3,240 acres), about the same size since the 16th century. Located on flat, sandy land near the Elbe River, it contains fields and forests along with its classic stables, indoor and outdoor training grounds and a symmetrical network of roads.

UNESCO describes it as “one of Europe’s leading horse-breeding institutions, developed at a time when horses played vital roles in transport, agriculture, military support and aristocratic representation.”

Kladruby director Jiri Machek said UNESCO’s recognition is the confirmation of “the global uniqueness of this place.”

“There are three unique aspects about it,” Machek told The Associated Press. “It’s not only about a tangible heritage, it is also the breeding of unique Kladruber horses, which means the landscape still serves its original purpose. And the third, unique thing — which is not mentioned so often — is the intangible heritage, the traditional way of doing things, that is we have been trying to operate the stud in a traditional way.”

ONE OF THE OLDEST HORSE BREEDS IN THE WORLD

Kladruby is the home of the Kladruber horse, a rare breed that is one of the oldest in the world with a population of only 1,200.

Kladrubers were bred to serve as ceremonial carriage horses at the Habsburg courts in Vienna and Prague. A warm-blooded breed based on Spanish and Italian horses, a convex head with a Roman nose is among their significant features.

Since the late 18th century, the Kladrubers have come in two colors, grey and black. The grey ones were used for royal ceremonies while the black ones served high-ranked clergy.

Today, they still do the same at the Danish court, while others are used by the trumpeters from the Swedish Royal Mounted Guard. Some carry police officers in the Czech Republic and the Netherlands.

The breed’s peaceful nature also makes them a popular riding horse among private owners around the globe, and some compete in international carriage driving events.

IF YOU GO: Kladruby is easily accessible by car or bus. You can choose from four different guided tours with prices up to 7 euros ($7.90). Three take 45 minutes, one is 30 minutes. Discounts for children, students, retirees and families.

Groups and tours in foreign languages (English, German) have to be booked in advance at: pruvodci@nhkladruby.cz. For individual visits, use the electronic booking system . The farm is open Tuesday to Sunday in April, May, September and October and seven days a week in June, July and August. More information at https://www.nhkladruby.cz/en including a 3D tour .

KATHMANDU, Jan 8: Officials at the Department of Archeology (DoA) have taken strong exception to the United Nations Educational, Scientific and... Read More...