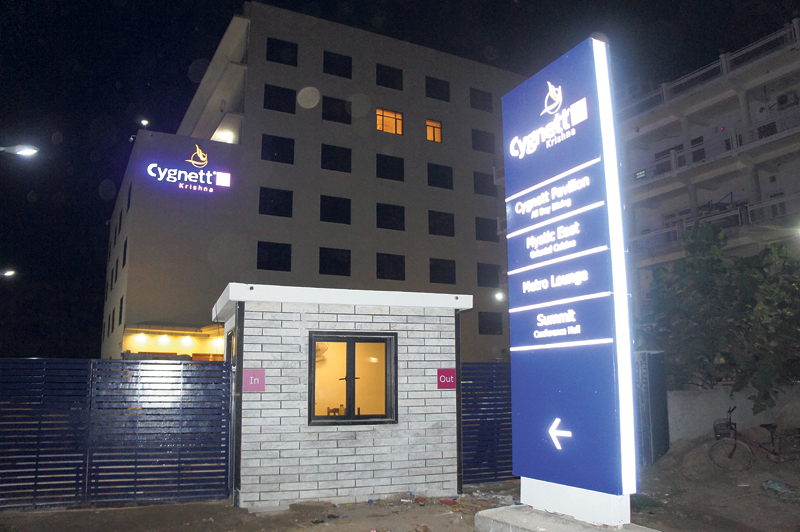 NEPALGUNJ, Sept 13: Cygnett Inn Krishna is all set to come into operation from Thursday, marking the opening of the first four-star-level hotel in Nepalgunj.

Local entrepreneur Dipendra Agrawal has set up the hotel in Surkhet Road of Nepalgunj in 17 kattha of land.

He says total investment in the hotel reached Rs 500 million.

The hotel has been ready for operation and will be formally opened on Thursday, according to the hotel operator.

Cygnett Inn, an international hotel chain, which has been expanding its operations to many other countries, has taken complete responsibility for the management and operation of Cygnett Inn Krishna. The parties have signed a 10-year management contract for the operation of the hotel.

“The hotel has been full investment from my part. But I am handing over the management and operation of the hotel to Cygnett Inn which has earned a good international reputation in the hospitality and hotel sector,” Agrawal says.

According to Agrawal, the company has been expanded its services into Nepal for the first time through this hotel in Nepalgunj.

He says the hotel would provide all services for domestic and foreign tourists.

“Every service of a four-star level hotel will be available at the hotel,” he says. “A swimming pool is being constructed and be completed within two months.”

Agrawal says his firm is in the process of acquiring a permit for the four-star hotel from the Department of Tourism.

The eight-storey building will be earthquake-resistant, he says, and have 96 rooms, four restaurants, two meeting halls and other necessary infrastructures.

Three lifts, a laundry system, water heating plant, censors connected from the main door to electronic equipment, 320 KVA generator as power back-up and other technology have been added to the hotel, he said.

The hotel will employ 64 Nepali and six foreigners.

Various problems like earthquakes, unofficial economic blockade imposed by India and frequent strikes delayed bringing the hotel into operation by more than a year and half, according to the investor.

While this is the first four-star hotel in the Nepalgunj city, a number of hotels and restaurants, as well as investment on hospitality industry, have been increasing in recent years in Nepalgunj -- a gateway to tourist destinations in the mid-western and far-western regions of the country.

Nim Bahadur Thapa, the chairperson of the Hotel Operators Association Nepalgunj, said the hotel industry is expanding in Nepalgunj to provide better services to tourists.

“The trend of opening hotels targeting tourists heading to destinations in the mid and far western regions is on the rise,” Thapa says.