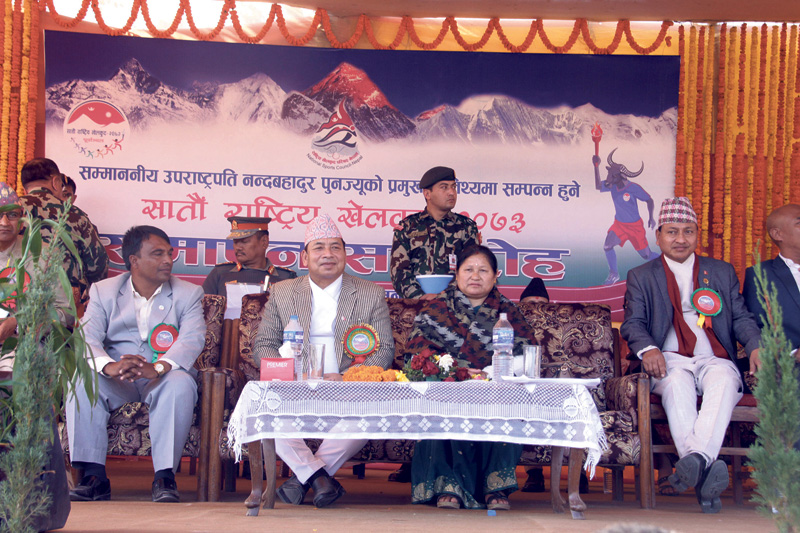 Vice-president Nanda Bahadur Pun (2nd L) among other guests during the closing ceremony of the Seventh National Games at ANFA Technical Centre in Dharan on Friday. Photo: Republica

The closing ceremony held at the ANFA Technical Center in Dharan concluded after National Sports Council Member Secretary Keshab Kumar Bista handed over the flag to Bhim Oli, the president of Mid Western Regional Sports Development Committee. Meanwhile, the decision to award the Ninth National Games to Western Region was also revealed during the closing ceremony. Earlier, the Olympic torch of the Games was also extinguish and flag removed.

Speaking in the closing ceremony, Vice President Nanda Bahadur Pun said that he was well aware about the poor management and various problems of the Games. "I have tried to gather information to my best about the National Games. I can understand how players could feel to compete under poor management, lack of proper preparations, untimely construction of infrastructures and poor existing infrastructures," Pun said.

"I am confident that the problems seen in the National Games will not be repeated in the next edition," he said.

Meanwhile, National Sports Council Member Secretary Bista's declaration a couple of weeks before the kick off that the Seventh National Games will be the best in terms of physical infrastructure and it will set a new standard in terms of facilities has made a mockery of himself after it concluded under such poor management and poor facilities. Vice President Pun also expressed his concern over infrastructures and regularity of event.

"National Games should be held after every two years and the first edition was held in 1981. We should have already organized 17 editions in these 35 years, but we have only managed to hold seven editions so far. The players have been the biggest victims of irregular Games. A talent will die if he does not get chance to play during his peak form," Pun said. "I draw attention of all stakeholders to host the Games on time in future. The conclusion of this Games means to begin preparations for the next edition."

Minister for Youth and Sports Daljit Sripali and NSC Member Secretary Bista thanked all for helping to conclude the Games and expressed commitment to start preparations for next edition and host it on stipulated timeframe.

"We have been able to accomplish the Games which was obstructed since long and created a new history. The Games was conducted in difficult time taking risks" said Sripali, also the president of NSC attributing that there were weaknesses in part of management. "There were many managerial weaknesses and the players were the major victims. I apologize to them. The government is serious about sports development. We must start preparation right now for next edition of Games. At the same time we also need to begin preparations for 2020 Tokyo Olympic right away. It is essential that we start preparations for 13th South Asian Games which is associated with national dignity. We could host it on time if we undertake every task properly."

In terms of facilities, the Games even did not meet the basic requirements. Poor infrastructures, manhandling incident of referee, refereeing disputes in various games were the negative aspects of the Games. The Games was held at various venues of Jhapa, Morang, Sunsari, Dhankuta, Saptari, Siraha and Udaypur of Eastern Region besides Kathmandu, Lalitpur and Pokhara.