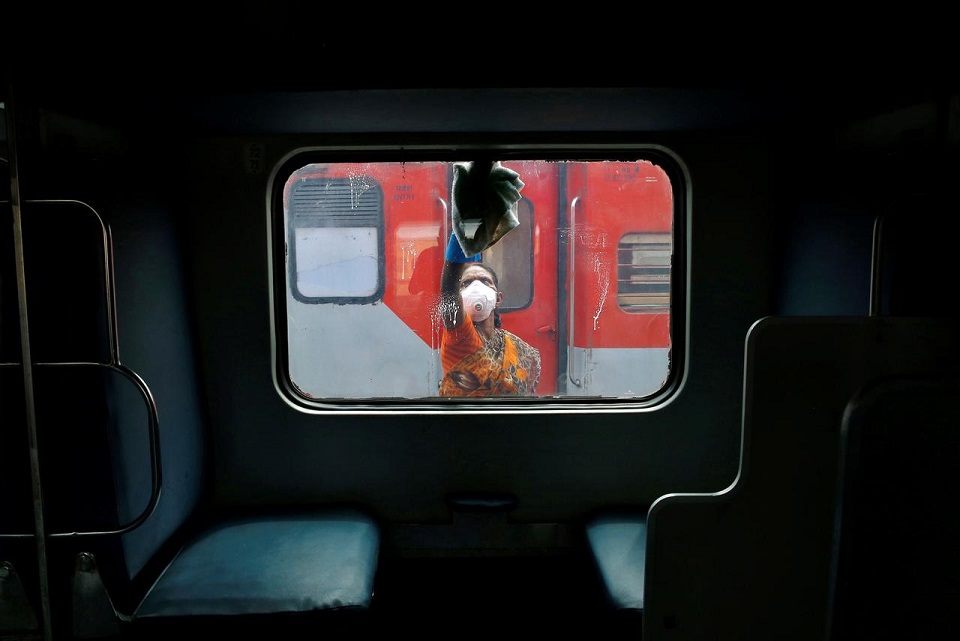 A worker disinfects the exteriors of a passenger train parked at a railway yard as a preventive measure against coronavirus, on the outskirts of Kolkata, India, March 16, 2020. REUTERS/Rupak De Chowdhuri

KARACHI/KABUL, March 16: Health authorities across South Asia reported rising tallies of coronavirus cases on Monday, raising the prospect of rapidly spreading outbreaks overwhelming poor medical facilities in a region that is home to a quarter of the world’s people.

South Asia has been relatively lightly hit by the virus compared with neighbours to the east, like China and South Korea, and to the west like Iran and parts of Europe.

But measures that have reined in epidemics in China, where the coronavirus emerged late last year, and South Korea are unlikely to work in poor, crowded parts of South Asia, health officials say.

“As compared to developed countries like the United States and China it will be difficult to (enforce) social distancing, especially in slum areas,” said Giridhara R Babu, an epidemiologist at the Indian Institute of Public Health in Bengaluru.

“The living environment itself is crowded and it may not be practical to ask them to maintain minimum distance from each other.”

Pakistan recorded a sharp rise in coronavirus cases on Monday, up 40 to 94, according to a Reuters tally of statistics from central and provincial governments.

The majority of new cases were in the southern province of Sindh in patients who had recently travelled from Iran - which has one of the world’s worst outbreaks.

Saeed Ghani, a cabinet minister in the Sindh government, told reporters on Monday existing quarantine facilities in Pakistan’s Baluchistan province on the Iranian border were inadequate, resulting in large numbers of coronavirus cases.

Afghanistan saw its tally rise to 21 with the majority of cases in the western province of Herat, which borders Iran and where thousands of Afghans cross back into their home country every day, some after being deported and others to escape a worsening Iranian economy.

Transport costs from the Iranian border to Herat city have quadrupled since the outbreak of the virus, officials said.

“We need food, we need medicines and we need all the basic facilities to be able to handle this problem.”

Afghanistan’s health infrastructure has been devastated by decades of war and a lack of funds and would be hard pressed to mount any sort of concerted action against a coronavirus epidemic.

Matin Noorzai, a wholesaler in the one of the main markets in the Afghan capital of Kabul, said he had seen unprecedented demand and soaring food prices in recent days as worried shoppers stocked up.

“If the situation continues like this, I am sure in the coming week there will be no food left in the market,” he said.

Elsewhere, Sri Lanka reported a near-doubling of cases to 18 from 10. India’s tally rose to 110, while total cases in the Maldives and Bangladesh rose to 13 and 8, respectively.

New Delhi followed several other Indian states by ordering the closure of night clubs and gyms, and banning gatherings of 50 or more people.

Bangladesh, like other countries in the region, cancelled international cricket matches and shut schools until the end of the month.

Speaking to fellow South Asian leaders via video conference, Modi said India would also offer rapid response teams and other expertise to deal with the crisis.

Around the world, the coronavirus has infected nearly 170,000 people and killed more than 6,500, according to a Reuters tally of official data.