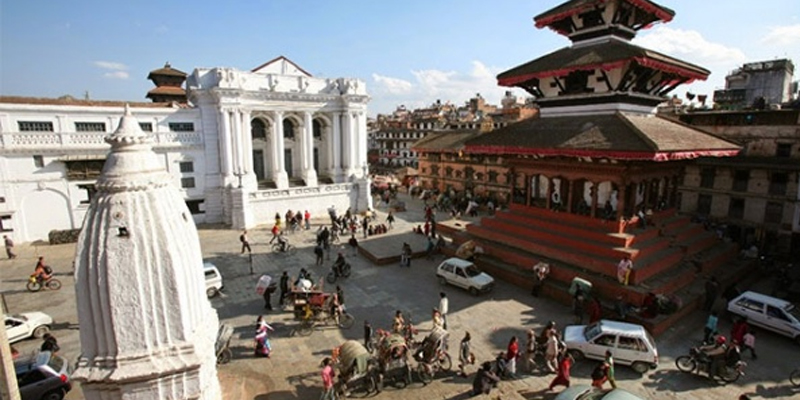 A lot can happen in a year and Ashrumai Shrestha can see that. Her neighbor’s daughter in law has become a new mother. She hears her favorite nephew is now officially a college student. Five of her acquaintances have left the country to work in the UAE. However, Shrestha finds herself stuck exactly where she was almost a year ago: under a UN tarp, inside her make shift tent, on an open field, two minutes away from the spot where her once rented room collapsed to the ground. She can see that the nation is getting ready to observe the anniversary of the first earthquake on April 25th. It seems more people have been reflecting on its devastating consequences as well. But as Shrestha puts it, she doesn’t have to. She is still living it.

Though clearly, she is not alone. The open field near Chuchepati where she sought refuge after the earthquakes also shelters hundreds of other families. That particular space in ward number six has an estimated 500 small tarp huts and what’s more, that isn’t the only make shift colony of tarp shelters around town.

This email address is being protected from spambots. You need JavaScript enabled to view it.">
Even though Bir Bahadur Khadka of the Kathmandu Metropolitan City Office states that the authorities don’t exactly know how many of these ‘camp sites’ exist, many capital dwellers can see it around their localities. It stands as yet another reminder of the havoc the quakes left behind in its wake and also serves as a glorious example of the extent to which the government has failed in rehabilitating disaster victims.

Shrestha too can’t believe that it is about to be a year since she became homeless.

“I had my own bed, furniture and a kitchen. I had many belongings as well as some savings but after the house collapsed, I lost everything. All of my clothes were ruined. The cash was lost or stolen, I still don’t know. Talking about it seems like talking about another life but that’s the truth. I’m staying here because I don’t have any other option,” shares Shrestha.

Following the recent thunderstorm, she has had to remake her tent. It’s a small space, with a thick mattress, a blanket, a couple of utensils and some rations; all that is left of Shrestha’s belongings. Her son who is working in Israel has been in touch with her. She is hoping that he can save up some money and help her resettle. It’s a plan but one that she can’t see put into motion anytime soon.

But such dire circumstances aren’t the only reason for that particular space’s population growth. Eight tents away from Shrestha, there are new residents. Ramesh Magar and his wife have recently moved to Kathmandu from their village in Singati, Dolakha. After asking around rent prices, they had directly approached a cousin, Maya Rana who had an extra tent in the space. They may be living on open grounds and there may not be any electricity, but economically speaking, it was the right thing to do.

“The rent rates have doubled. These days a single room can cost up to Rs 5000 and that is with little to incredibly no water and storage facility. Then there were some landlords who actually asked me to rent the entire flat. It’s only two of us but they are not interested in just renting out a single room. Even the small tin top sheds seem to be in demand and the prices have swelled. These tarps were honestly the best deal,” says Magar.

His cousin, Maya Rana consoles him and his wife saying that since the earthquakes are still occurring every now and then, it might be for the best. Rana is still nervous about living in concrete houses after she was caught alone during the April 25 incident. She says she feels safer in the open field.

“Over the year, I did try and look for other rooms to rent but other than the bloated price rates, another deterring factor is the safety. The apartments that withstood the earthquakes are naturally still occupied. Those rooms that are up for rent are usually the ones that suffered several damages during the quake. That’s the case with my previous room as well. I use that for storage and live here. I feel safer here,” says Rana, as she helps her daughter who studies in class five get ready for school.

Compared to Shrestha, she has a bigger tarp. She has also managed to cramp in an actual bed, cooking stove and a small dresser inside it. Rana says it isn’t comfortable living but over the year, she and her daughter have learnt to manage. She cleans houses and washes dishes for a living and wants to save some money for the time being. As it turns out, quite a few living at the open field too still rent a room but they prefer the tents and usually for the same two reasons: safety and savings.

Still, Daya Lama wants to be clear that those people don’t make the majority. He says people like him would really suffer without these sites. Lama works as a laborer at a furniture store and has been living in tents for a year.  In fact immediately after the earthquake, he was one of the volunteers who had helped the UN arrange water supply to this particular camp site. He lost all of his belongings back in his village in Nuwakot as well as here in Kathmandu. All he has in his name is a tarp and five goats that he keeps tied near their tent.

“Every now and then, rumors about authorities forcing us to leave start making the rounds. It makes me incredibly nervous. All they have to do is stop the water supply and take out our make shift toilets and we won’t have a chance. Life is hard as it is but getting to live here for free has given us some respite,” says Lama. He doesn’t know how long he can continue living like this but since the state doesn’t look keen on helping anytime soon, he hopes they have no plans to interfere as well.

In a way, these families are an apt reflection of the rest of the state affair as well. Being victims of circumstance, poor economy and governance, at the end of the day, they are all trying to make the most of whatever little they have at the moment. There’s a grave reason why these temporary camps are still up and running and as long as our government stays apathetic, home will remain an elusive concept.

This email address is being protected from spambots. You need JavaScript enabled to view it.">pryankagurungg@gmail.com

Cover story: In the name of compassion

At the central level, DAH is responsible for managing overall animal health related activities throughout the country. Along... Read More...

JUMLA, Jan 8: The Karnali region is witnessing intense snowfall from early in the morning which has put normal life... Read More...