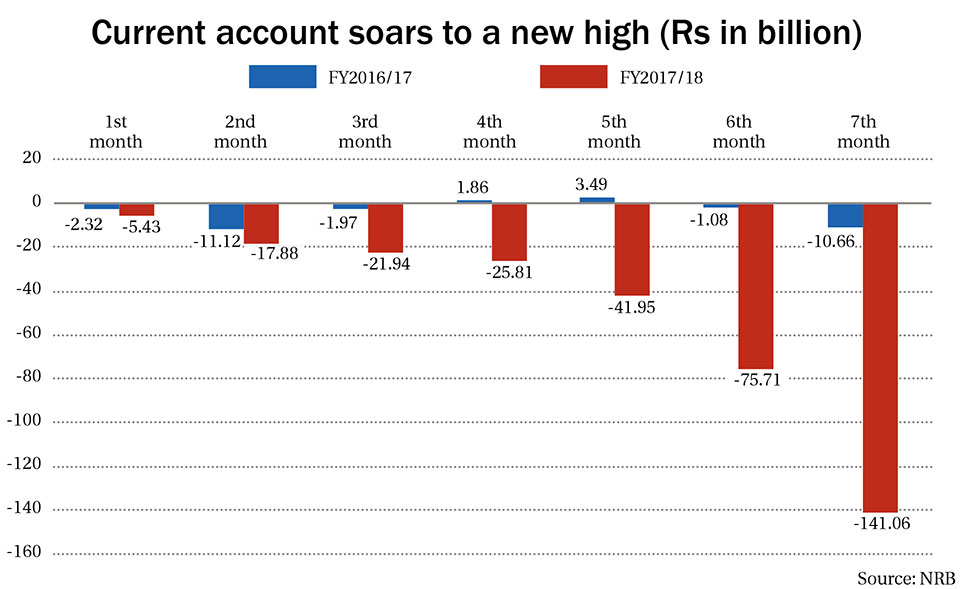 KATHMANDU, March 19: Country’s financial condition is getting tighter as all indicators of financial transactions with other countries have posted negative indicators.

A loss in the accumulation of international reserves on account of a deficit in overall balance of payments along with a significant rise in current account deficit has contributed to tighter financial conditions, said Nepal Rastra Bank (NRB) in its current microeconomic and financial situation of Nepal of the first seven months ending mid February. The report was made public on Sunday.

The NRB says the gross foreign exchange reserves decreased 2.8 percent to Rs. 1049.20 billion as at mid-February 2018 from Rs. 1079.43 billion as at mid-July 2017 while the balance of payment remained at a deficit of Rs 18.28 billion in contrast to a surplus of Rs 36.95 billion in the same period last fiscal year. The foreign exchange holdings of the banking sector are sufficient to cover merchandise and service imports of 9.8 months.

Merchandise imports recorded a growth of 18.9 percent amounting to Rs. 661.23 billion in the review period compared to an increase of 60.8 percent in the same period of the previous year.
Likewise, significant increase in imports and dividends payment for foreign investment led to increase the current account deficit to Rs 141.06 billion from Rs 75.71 billion in the review period.

A new factor that affected the current account deficit this time was the dividend repatriation of Ncell Pvt Ltd following the Supreme Court verdict to release the amount that was on hold on the request of tax authorities. The NRB informed that the largest dividend payment of Rs 23 billion to Ncell was the major factor behind the whooping deficit in current accounts. Some foreign banks and hydropower companies have also taken away dividends in the review period.

Remittance flow has improved, but indications do not show that it will improve further. Deputy spokesperson for NRB Rajendra Pandit said that the country’s overall financial performance with other countries has been in a bad condition. “The country may have options for discouraging consumption oriented imports. It may also take austerity measures to cut spending on foreign visits and even paying fees for education among others,” added Pandit. He also emphasized on the need to bring in more foreign investment for improving the external sector. A total of Rs 14.34 billion came as foreign direct investment, which is an increment of 36 percent compared to the corresponding period of the previous fiscal year.

The NRB has expected to improve government spending to ease financial conditions in future. Chief of research department of NRB Nar Bahadur Thapa said, “Despite negative indicators in several fronts, there has been improve in import of raw materials, machineries and equipments. It indicates that economic and financial activities will at least improve to an extent.”

“Increasing imports for productive sector that help capital formation, is a positive indicator that the country’s economy is moving in a positive direction,” said Keshav Acharya, an economist.
There is also a huge growth of import of copper wire rods, scrapes and raw materials for garment industries from the third countries.

KATHMANDU, May 28: IFC, a member of the World Bank Group, has assisted Nepal Rastra Bank (NRB), the central monetary authority of... Read More...

‘Election must for constitution implementation and country's prosperity’

POKHARA, Dec 14: Minister for Federal Affairs and Local Development, Hitraj Pandey, has said that the government has been carrying... Read More...