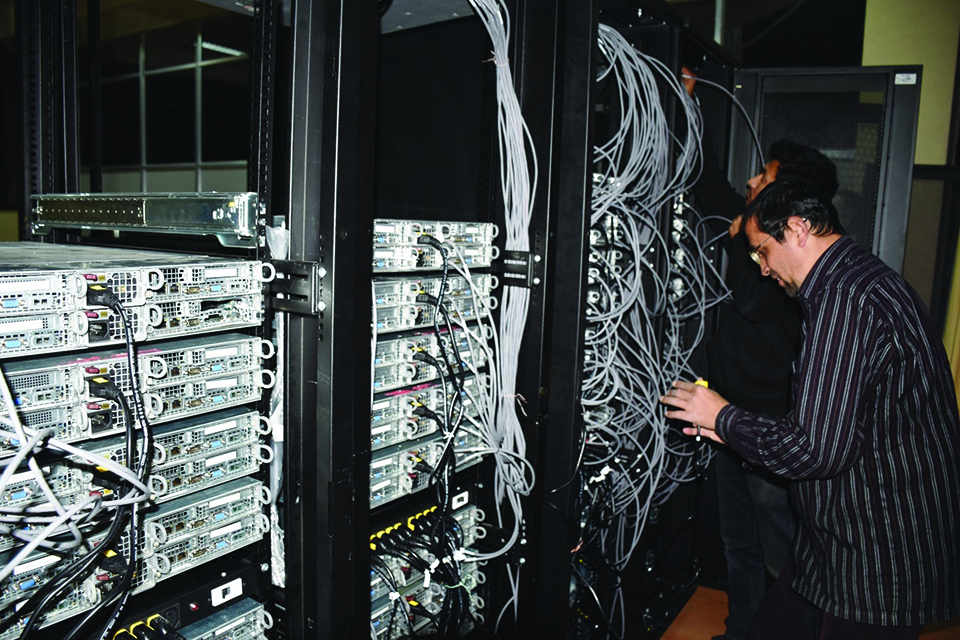 Madhusudan Guragain/Republica The recently installed supercomputer at the IT Park, Banepa.

BANEPA, Dec 30: Kathmandu University (KU) has installed a supercomputer at Information Technology (IT) Park. This is the first time the country got a supercomputer, which is expected to contribute significantly in the sector of research and handling of databases.

"General or ordinary computers use a serial processing method: receive data input, store, process, and produce output. But supercomputers work very differently," said Dr Rajendra Prasad Adhikari, assistant professor of Physics at the KU. "Now we don't need to depend on others for data processing. Dependency had shrunk our studies and research abilities. With our own supercomputer at the IT Park, we have entered a new era of technology."

The supercomputer in the IT Park has 184 computer servers, 16 storage servers, and 12 high-speed switches. Kathmandu University official said that it is the fastest supercomputer in South Asia after that of India's.

According to Adhikari, a supercomputer's ability to process data is much higher than that of ordinary ones. Depending on the size and capacity of the supercomputer, it can perform calculations from a few thousand to several hundred thousand times faster than an ordinary personal computer.

A supercomputer is said to be very useful in analyzing data of earthquake modeling, climate change, control of H1N1 virus, genetic diseases, among other subjects. In lack of supercomputer, Nepal was lagging behind in conducting proper studies on these issues, according to Adhikari. "This is a leap forward in the sector of research; we now have access to the facility."

According to Adhikari, supercomputers use parallel processing, thereby receiving, storing, processing and producing multiple outputs simultaneously. This means that a supercomputer's ability to process data is significantly higher.

"Faster computational and large storage capacities of supercomputers make them useful, even vital, in many areas of research, especially those involving academic, health, government and industrial sectors in the country," he said.

Elaborating on health sector of Nepal, Adhikari said that the hospitals in the country periodically delete health image data (MRI, PET Scan, CAT scan, etc) to make space for new image data for their patients. 'They have no choice than to delete those important data as there's not enough space for storage'

"But in developed countries, they have all the data in the store. Such data is used by doctors to improve follow-up visits and by researchers to carry-out studies that could inform health administration policies," Adhikari said.

No wonder, health data is imperative for predictive analysis, to check a patient's progress and diagnosis disease timely. But in lack of supercomputer, doctors, and researchers here are compelled to compromise with the technology.

Adhikari stated that for research purposes, Nepali scientists and engineers have been relying on institutions of other countries to be able to compute and process their data. "This is a slow and inefficient method, limiting the depth of research that can be carried out. It is far better to be self-reliant," he stated.

Shedding more light on a supercomputer, physics experts at KU stated that it can greatly help in tracking pollution, identifying the hydro-electric potential of different rivers, and much more. Real and simulated data in all these areas need to be collected and preserved for analysis.

"While storage is not a really big issue since disk space is cheap, analysis of big data requires massive computing power of supercomputers. It can also be used to store confidential data such as that of land and properties, which are of national interest and require maximum security," Adhikari said.

Subodh Sharma, Registrar of KU informed that the supercomputers, network switches and other equipment were given to Kathmandu University by CERN (European Organization for Nuclear Research), based in Geneva. The HPC facility has also received technical help from the University of Arkansas, USA.

Kathmandu University has been working with CERN and ICTP (International Centre for Theoretical Physics) to inspire and teach physics students – not just from KU, but also with Tribhuvan University and others since 2013 by organizing Master classes and Winter Schools. In June 2017, Kathmandu University had hosted the first South Asian High Energy Physics Instrumentation workshop on detector technology and applications.

"The workshop brought together 70 scientists and students from South Asia and Mauritius, with the aim of strengthening the scientific partnership between individual countries and CERN," Sharma said.

KATHMANDU, Jan 1: The number of recipients of 'smart' driving licenses from the Ekantakuna-based Department of Transport Management has surpassed... Read More...

The trials of Aung San Suu Kyi, from heroine to villain to convict
51 minutes ago