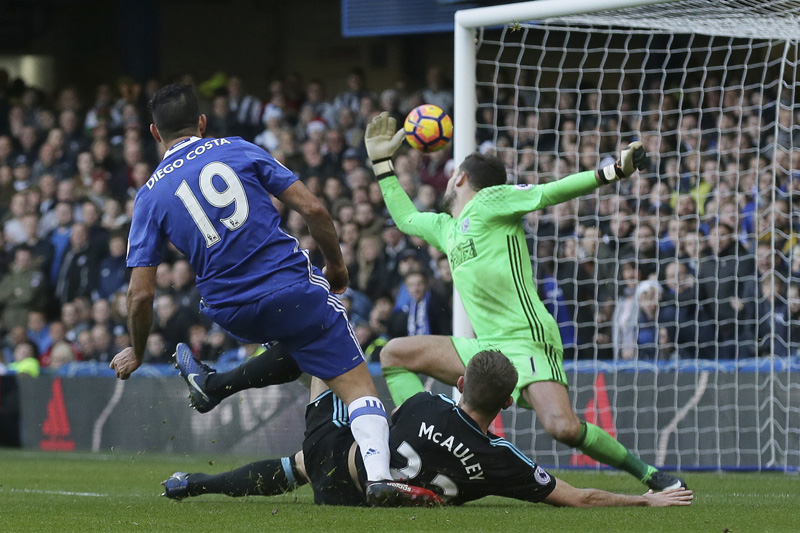 Costa muscled West Bromwich Albion defender Gareth McAuley off the ball before cutting inside and curling a shot into the top corner in the 76th minute to seal a 1-0 win for Chelsea at Stamford Bridge.

Chelsea has won its last nine matches in the league — the team's best run since 2009 — to power to the top of the standings and Costa has scored in seven of them. The Spain international is the top scorer in the Premier League with 12 goals.

Last season, Costa — a striker who constantly plays on the edge — appeared to be more interested in picking fights than scoring goals and it hurt Chelsea, which finished 10th in a dismal defense of its title.

Fast forward to this season and Costa is leading Chelsea's revival under coach Antonio Conte, who reacted to the winning goal by punching the air in delight and jumping into the arms of two members of the coaching staff.

Since Conte switched to a 3-4-3 formation following a 3-0 loss at Arsenal on Sept. 24, Chelsea hasn't dropped a point and is three points clear of second-placed Arsenal.

Here's what else happened on Sunday:

Under-fire goalkeeper Loris Karius, who was criticized for his fumble that gifted Bournemouth an injury-time winner last weekend, got a hand to Dimitri Payet's 27th-minute free kick but failed to keep it out as West Ham canceled out Adam Lallana's early goal at Anfield.

Liverpool center back Joel Matip then allowed a long ball down the middle to get through to Michail Antonio, who prodded a finish past a static Karius to put the visitors ahead in the 39th.

Another mistake, this time from West Ham goalkeeper Darren Randolph, earned Liverpool a point. Randolph flapped at Sadio Mane's cross and the ball fell to the feet of Divock Origi, who tapped home from close range in the 48th

Liverpool manager Juergen Klopp said the goals his team conceded "could have been avoided." Defense is the area where Liverpool seem to be most vulnerable this season as the team fights for the title.

After being slowly integrated at United, Henrikh Mkhitaryan is looking the part and scored the goal in a significant win for Jose Mourinho's team against a rival for Champions League qualification.

Mkhitaryan raced onto Ander Herrera's through-ball and drove home a rising shot in the 29th minute for his first Premier League goal. In his last four games in all competitions, Mkhitaryan has scored two goals and set up two others, underling his growing importance to United.

An ankle injury that forced him off in the 85th minute will set back his progress, though. Mourinho expects the Armenian to be out for around two weeks.

United has had problems closing out games this season but encountered few worries against Spurs, whose in-form striker Harry Kane barely threatened.

United is three points below fifth-placed Tottenham and six adrift of Manchester City, which occupies the fourth and final Champions League place.

Sofiane Boufal showed just why Southampton broke its transfer record to sign him in the offseason.

The Morocco forward struck from 25 meters for his first Premier League goal since joining from French club Lille for 16 million pounds ($21 million) in August.

Southampton won despite coach Claude Puel rotating his team as he deals with a busy part of the season. This was the Saints' 24th match so far, taking in a Europa League group-stage campaign that ended Thursday with Puel's team getting knocked out of the competition.

Leading striker Charlie Austin injured his shoulder in midweek and Puel said Sunday the player would be out for 3-4 months.