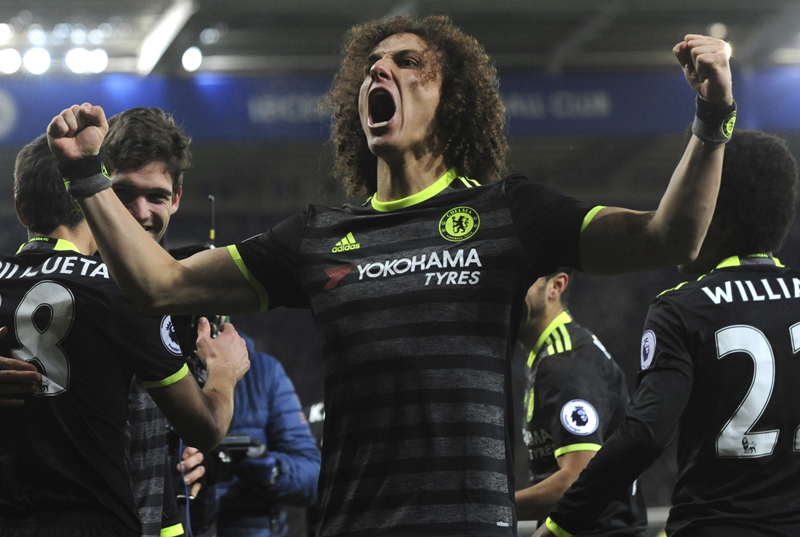 Both teams won their games 3-0 despite missing their talisman on Saturday, but uncertainties linger about the future of the duo in English football.

West Ham, which beat Crystal Palace, went public with Payet's bombshell that he wants to leave and is refusing to play. The east London club insists the France midfielder will not be sold in the January transfer window which runs for another two weeks.

After twice referencing the "truth," Conte stressed: "I like to tell the truth and not lie. Diego stopped training on Tuesday because he felt a pain in his back and from that moment he didn't train in the week."

Conte didn't elaborate on the apparent injury, any further assessment by Chelsea's medics, or when the striker is likely to be fit again.

"It's a bit difficult to tell you this now," Conte said.

Costa's absence followed the Spain international being linked with a big-money move to the ambitious Chinese Super League and reports of a rift with the Chelsea coaching staff.

Pointedly, there was no denial from the manager who had already expressed a desire not to lie in public.

Here's a look at the action on the field on Saturday:

Chelsea's first two goals came from an unlikely source: Marcos Alonso. The wing back first netted in the sixth minute after being teed up by Eden Hazard and he was on target again six minutes into the second half with a low drive.

Pedro Rodriguez headed in the third as Chelsea went seven points clear of Tottenham and left Leicester only five points above the relegation zone in a pitiful defense of the title won so astonishingly last year.

The only negative for Tottenham came in the second half when defender Jan Vertonghen was forced off after twisting an ankle. Pochettino said the injury "looked bad," but there are no plans to sign a replacement during the January transfer window.

Arsenal rose to third and sent Swansea sliding to the bottom of the standings in Paul Clement's first home game in charge since replacing the fired Bob Bradley.

Olivier Giroud scored in a fifth consecutive game, including last weekend's FA Cup victory over Preston, and Alexis Sanchez volleyed in his 14th goal of the league campaign. Alex Iwobi had two deflected strikes that went down as own goals scored by Jack Cork and Kyle Naughton.

Andy Carroll helped West Ham fans forget Payet's unsettling conduct by scoring an eye-catching bicycle kick as West Ham's three-match losing run in all competitions ended. Sofiane Feghouli and Manuel Lanzini netted either side of Carroll in the London derby that saw some crowd disturbances in the stands at the Olympic Stadium again.

Joey Barton marked his league return with a goal after coming off the bench in the second half and bending a free kick around the wall.

Barton, who last played in the top-flight with Queens Park Rangers in 2015, spent last season with Burnley in the second-tier but left after winning promotion for an ill-fated spell in Scotland at Rangers.

Barton's spell in the team could be short-lived with the 34-year-old midfielder facing a possible ban for breaching betting regulations. Burnley, which has won all eight league games at home, climbed above Southampton into 10th place.

Nov. 6: The last time Hull won in the Premier League and the last time Abel Hernandez started a game.

Hernandez capped his recovery from a groin injury by ending Hull's two-month wait for a league win by scoring twice either side of Tyrone Mings' own goal.

It gave Marco Silva, the former Olympiakos and Sporting Lisbon coach, a winning start to his career as a Premier League manager, and ensured Hull climbed off the bottom of the standings.

The tributes to Graham Taylor were more memorable than the game.

Taylor, a former England manager who took Watford from the fourth tier to the topflight in five years from 1978, died on Thursday following a suspected heart attack. Taylor's widow, Rita, was at the stadium to join fans in a minute's applause before kickoff.

A third loss in four matches kept Sunderland in the relegation zone, while Stoke climbed to ninth. Marko Arnautovic scored twice and Peter Crouch headed in a third before halftime.

Police refuse to register complaint against Rabi Lamichhane over passport case
18 hours ago
UML in favor of reinstating Lamichhane as Home Minister, Maoist Center opposed to the idea
20 hours ago
Ruling alliance on the verge of collapse over new president, home ministry row
3 hours ago

Gold price increases by Rs 500 per tola
56 minutes ago