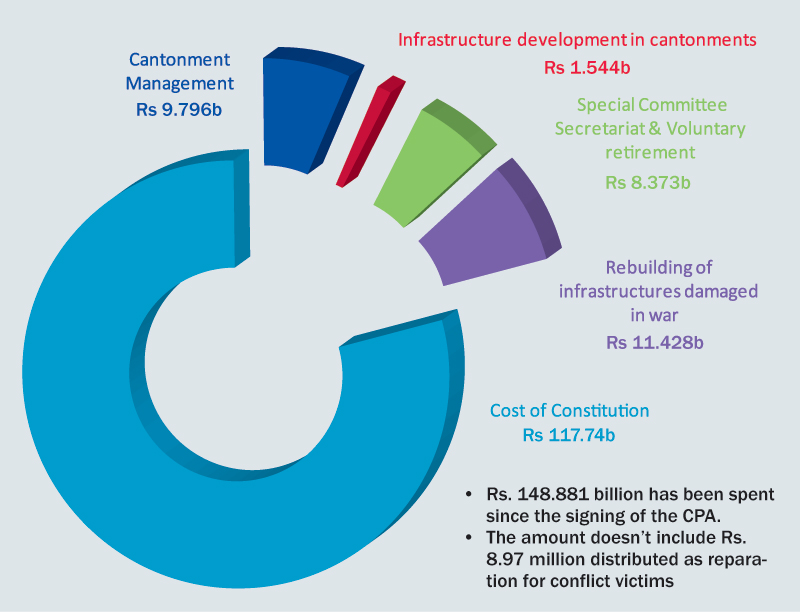 KATHMANDU, Nov 20: As the country marks the tenth anniversary of the signing of the historic Comprehensive Peace Accord-2006, the accumulative expenses made for carrying out major tasks of the process has reached Rs 148.881 billion so far.

Some of the key tasks of the process such as the responsibility of finding truth and reconciliation and carrying out investigation into thousands of enforced disappearances of the decade-long insurgency however are yet to be completed.

Promulgation of a constitution from the Constituent Assembly (CA), which was one of the key tasks of the peace process, was completed a year ago but the country had to invest at least Rs 117.74 billion to produce the national charter.

The cost of constitution increased markedly as the first CA was dissolved without producing the statute even after four years of work and investment. Then the second election to the CA was held and this CA worked for additional two years. The first CA election was held in April 2008. The second CA election was held in November, 2013. The constitution was finally promulgated in September, 2015.

Another major expenditure was incurred for rebuilding infrastructures damaged during the insurgency that stood at Rs 11.428 billion. The expenses made for the management of cantonments used to house Maoist arms and combatants was Rs 9.796 billion. The government bore the cost of cantonment management from November 2006 to April 2013, when the former rebel Maoists handed over the party’s arms and combatants to the government. And, the cantonments were subsequently dissolved.

The government spent Rs 8.373 billion for special committee secretariat and for voluntary retirement of the Maoist combatants and Rs 1.544 billion to build infrastructure in all the cantonments in various parts of the country.

As a large number of disqualified former Maoist combatants have been taking to the street accusing the government and the Maoist party of betraying them, ensuring sustainable peace after completion of the process seems challenging.

85 dead, 46 missing due to monsoon-induced disasters in Nepal
17 hours ago

85 dead, 46 missing due to monsoon-induced disasters in Nepal
17 hours ago