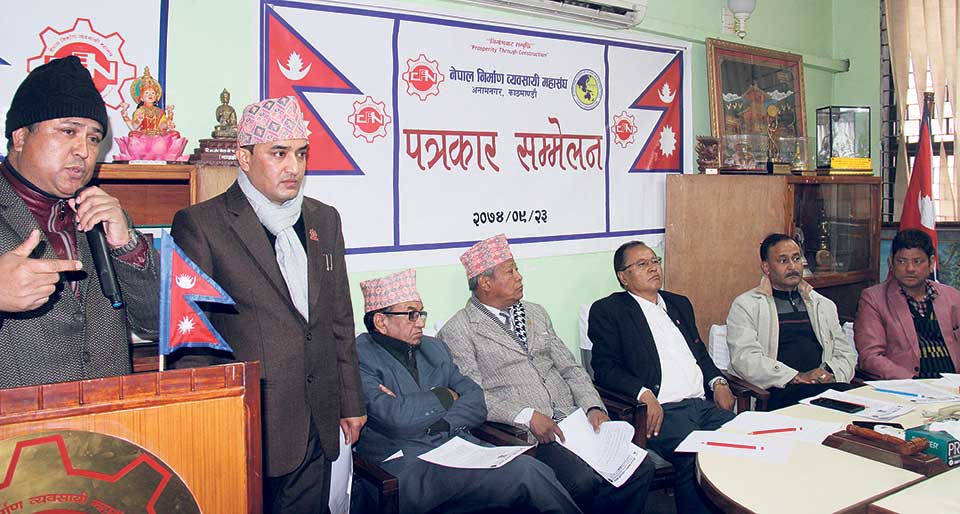 Organizing a press meet in Kathmandu on Sunday, Federation of Contractors Association of Nepal (FCAN) said that price of cement has gone up by Rs 100 per bag (50 kg), while steel rod has become dearer by Rs 7 per kg compared to prices before the provincial and federal elections.

A bag of OPC cement is being retailed at Rs 910, while steel rod now costs Rs 85 per kg.

Stating that there is no reason for price hike, the federation has appealed to the cement and steel manufacturers to roll back price hike and urged the government to curb artificial price hike.

“Our attention has been drawn toward arbitrary increment in the prices of cement, steel rod, sand and aggregate,” General Secretary of FCAN, Ram Sharan Deuja, said. “The projects that we are building for the government have seen price escalation. But the government has adjusted price of these materials in the price index.”

The government should either curb the price hike, or it should direct the price fixation committees led by chief district officers to immediately revise the price index as per the market price, said Deuja.

As the rise in the price of construction materials can also be seen in the price index of the Nepal Rastra Bank (NRB), it is natural for the contractors to claim price escalation in the project cost.

But such price excavation will come into effect only if the price hike stays for a minimum 12 months.

Speaking at the press meet, former FCAN president, Jayram Lamichhane, blamed the cement and steel factories for forming a cartel to control market prices. “There is no reason for price hike as rise in price of petroleum products is very low. Also, problem in clinker import does not affect much as many clinker producers have already come into operation in the country,” added Lamichhane.

The increment in the price of construction materials has come at a time when construction work is gaining pace throughout the country. Construction works normally begins after the end of festive season in October. But provincial and federal elections delayed such works a bit this year.

The government has imposed high customs duty on import of finished materials like cement and steel. It, however, has given tax concessions for import of raw materials to promote manufacturing industries.

“We also urge the government to encourage import of finished materials directly from foreign countries, if needed, to curb such artificial price hike,” said Lamichhane.

Civil contractors are also suffering from intermittent supply of sand and aggregate.

“The government fixes the price of sand and aggregate in each district. But it does not designate crusher industries or sand mine for a particular project. It has also not fixed transportation cost between crusher industries and the project site,” Lamichhane added.

The delay in release of payments worth billions of rupees for works completed by civil contractors in Fiscal Year 2016/17, particularly road projects, has created liquidity crunch in the banks and financial institutions. As a result, contractors are finding it difficult to get bank loans.

Meanwhile, Tara Prasad Pokhrel, general secretary of Cement Manufacturers' Association of Nepal, refuted claims of artificial price hike made by the contractors. “The price has gone up by only 4-5 percent. It is because transportation cost has gone up by more than 30 percent. Similarly, price of coal has increased to US$ 112 from $75,” he said, defending the decision to raise the price of cement.

KATHMANDU, April 3: Contractors have warned to declare a ‘construction holiday’ from Thursday, citing the excessive hike in the price of... Read More...