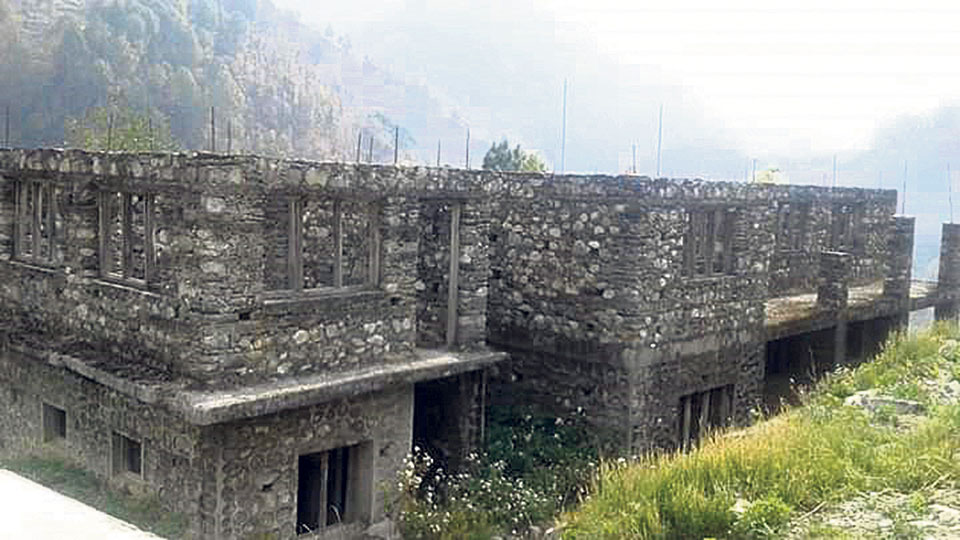 The under-construction building of Khawang Health Post which has been abandoned since years.

PYUTHAN, April 20: The building of Khawang Health Post in Pyuthan district should have been completed by 2014, as per the agreement reached with the contractor. However, the contractor left the project halfway to join politics and has remained contactless since then.

Contractor Amar Singh Pun, who was entrusted with the responsibility of constructing the building, was elected as a member of the Constituent Assembly in 2013 under proportional representation (PR) category. The work of the building, which was halted due to the absence of the contractor, has not resumed yet. The construction of the building had kicked off in 2012.

The contract of the building was given to Nepal Pragati/Rapti/High Himalaya JV. The joint venture company had signed the contract worth Rs 7.7 million excluding tax with the Department of Urban Development and Building Construction (DUBDC). So far, the company has completed only 53 percent of the work for which it has already received payment of more than Rs 5.3 million for the two-storey building with 16 rooms.

Even though the first storey is almost complete, the company is yet to start the work for the second floor. DUBDC has repeatedly sent letter to the contractor urging it to complete the work on time but in vain. As the company did not respond, DUBDC is planning to announce a tender for the building once again.

The snail-paced work of the contractor has irked the locals. Shiva Rijal, chairperson of Naubahini Rural Municipality, informed Republica that the contractor company has demanded the remaining Rs 2.5 as well.

“We have been told that the laborers are yet to receive their payments,” said Chairperson Rijal, adding, “We will continue making efforts to ensure that the work is completed on time and the laborers are also paid for their hard work.”

Local laborers have time and again made rounds of the rural municipality office requesting for their wage. According to the villagers, the concerned authority must take stern action against the contractor and provide the wage of the laborers. Reportedly, 52 workers are yet to receive their payment. Laborer Shovaram Pun stated that the company owes them Rs 1.6 million.

The agreement signed between then Chief District Officer (CDO) of Pyuthan, Ram Bahadur Kurumwang, and the representative of the company, Om Bahadur Pun, shows that the building must have been completed by May 2014. Even after such a long time, neither the project has been completed nor has the contractor company blacklisted.

In lack of proper building, Khawang Health Post has been delivering its services from a congested place. Tara Bahadur Thapa, in-charge of the health post, said, “If the building had been completed we would have shifted there. But now we are thinking of shifting to the previous building which is 35 years old.”

NEA is working on large projects with 2,000 MW capacity: MD Ghising
22 minutes ago