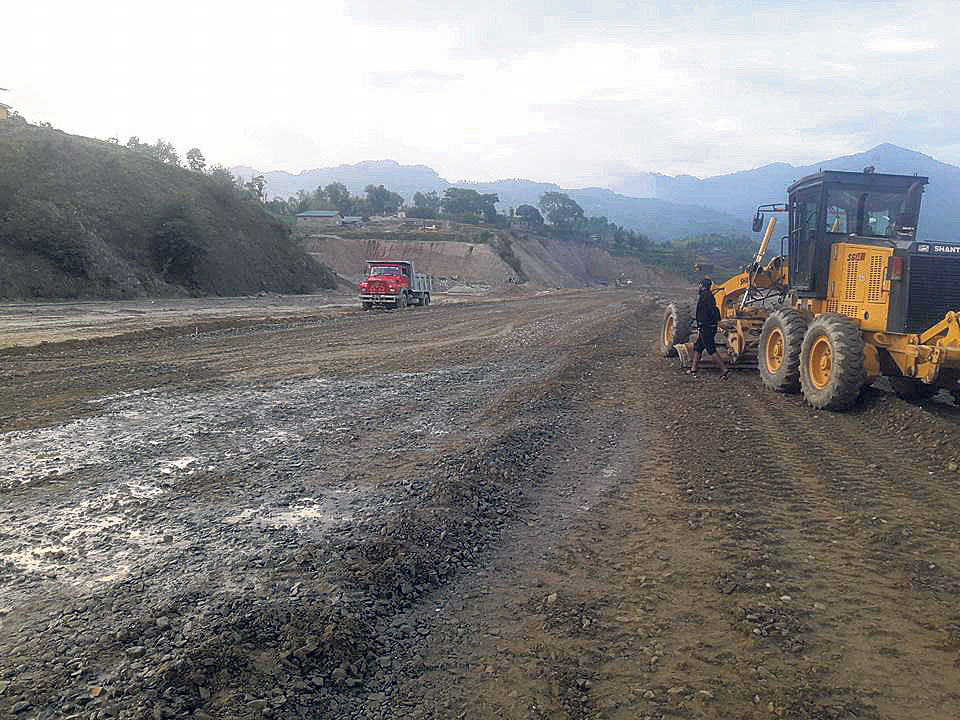 KHOTANG, July 21: Negligence by contractors has left construction of Thamkharka airport in the eastern district of Khotang in quandary. The deadline to complete the work was mid-July, 2018.

Rauta Construction has undertaken the task of constructing the airport. The airport construction site is at Badkadiyale–4 in Khotehang Rural Municipality in the district.

Although the airport was ready for blacktopping, early monsoon has affected construction works, Shrestha told Republica.

“Only the blacktopping work has remained at the airport,” Shrestha said. “The material needed for blacktopping has not been delivered yet.”

The CAAN had commenced the construction work with an investment of Rs 92.5 million.

Locals have complained that the contractors have been dillydallying with the construction work. The District Administrative Office has reported to the Ministry of Home Affairs about the delay in blacktopping at the airport.

As the construction work continued to get delayed, the contractor had amended its work schedule on January 22 this year. According to the new schedule, the contractor was supposed to complete asphalt concreting by mid-June, and complete the entire work by mid-July.

“As soon as the rains stop, we will resume work and complete it within two months,” Shrestha claimed.

Delay in the construction of the only airport in the southern part of the district has angered the people of Khotehang, Barahapokhari and Jantedhunga Rural Municipalities.

The airport is providing air services to the people of Khotehang, Barahapokhari, Jantedhunga rural municipalities of the district, as well as several villages of neighboring Bhojpur district. It is the only option for public transportation due to lack of road connectivity. Previously, the airport used to operate round the year.

The airport had halted its operation along with the beginning of blacktopping work at the airport on March 13, 2017, according to Narendra Udas, station in-charge of the airport.

PYUTHAN, Sept 24: A plan with an estimated cost of Rs 770 million was unveiled for the construction of Swargadwari... Read More...

USD 800 stolen from student's luggage at TIA
10 minutes ago