Construction of ginger and turmeric processing plant does not seem viable 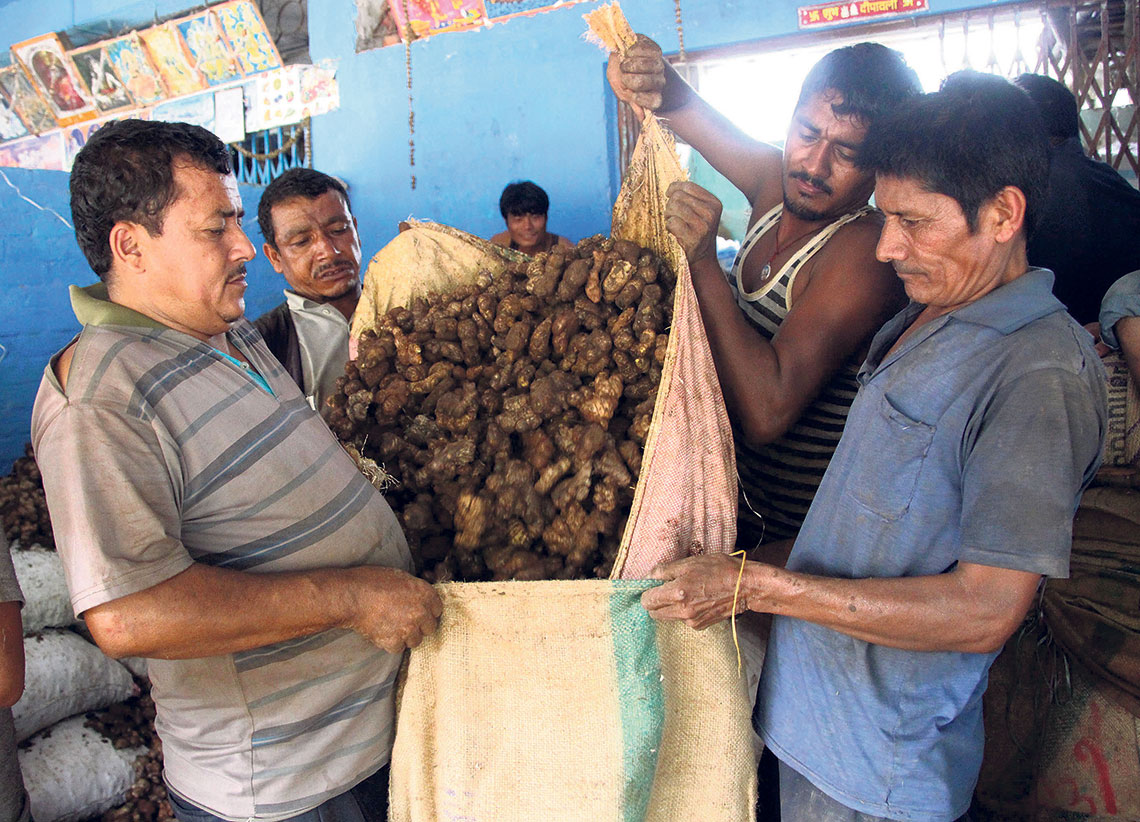 Lack of infrastructure cited as reason

DHARAN, May 11: Citing the lack of infrastructure as per proposed framework, ginger and turmeric dusting and processing plant construction at former Bishnupaduka Village Development Committee (VDC), Sunsari, seems impossible. The Prime Minister Agriculture Modernization Project had designated this area as a zone for ginger and turmeric production.

Although budget had been allocated to the former VDC for the project, traders and farmers alike do not deem this area as the best place to construct the industry. They rather suggest that the dusting and processing plant should be set up somewhere around Dharan Agriculture Produce Wholesale Market. As a result of the lack of a dusting and processing plant, farmers in eastern Nepal have to send unprocessed ginger to India for processing where a bulk of the produced ginger go wasted at a time when farmers do not receive appropriate price for their products.

The government had allocated budget of Rs 39 million for the construction of the processing plant in the current Fiscal Year 2017/18. Half of this sum is to be covered through grant as per the processing plant (ginger and turmeric) grant framework. It states that the government will bear 50 percent of the total construction fee while the rest should be collected via agricultural cooperatives, firms and other groups.
Although the project implementation unit received five proposals for this purpose, upon the inspection of technicians, none of the proposals met the minimum requirements set forth by the framework, according to Nil Kamal Singh, senior agricultural officer and chief of the project implementation unit. "None of the proposals we received were found to be feasible upon close inspection," he said.

The framework set forth by the government suggests that the land where the processing and dusting plant is to be constructed should be owned by the proposers themselves or the party coming up with the proposal should be renting the land for at least 15 years. The land area should at least be 1.5 hectares. Likewise, the house where the processing and dusting plant was set to be constructed, should have access to electricity, water supply and road network. Additionally, the plant should be capable of processing a ton of turmeric or ginger per hour is one of the requirements of the plant.

As land with the said requirements could not be found in the former Bishnupaduka VDC, the Ginger and Turmeric Production Zone Management Committee has sent an application to the project office requesting permission to set the plant outside of the VDC, but within the district, so that the budget allocated for the processing plant will not freeze.

"It has been a problem as the budget clearly is allocated for the former VDC. However, with no land meeting the minimum requirements, if a proposal to construct the plant within the district is submitted, it should be accepted. This way the budget can be saved from freezing," said president of the committee, Sudarshan Shrestha.

The Dharan Agriculture Produce Wholesale Market alone makes transactions of 10,000 tons of ginger every year, 90 percent of which makes its way into India. Due to this fact and a major need for a ginger and turmeric dusting plant, farmers and exporters alike are eager to set up the plant at the market place, which they consider most suitable.

Souls of My City: Disability does not mean inability

JUMLA, Nov 1: With just 25 days left for the parliamentary and provincial elections of November 26, candidates nominated by political... Read More...