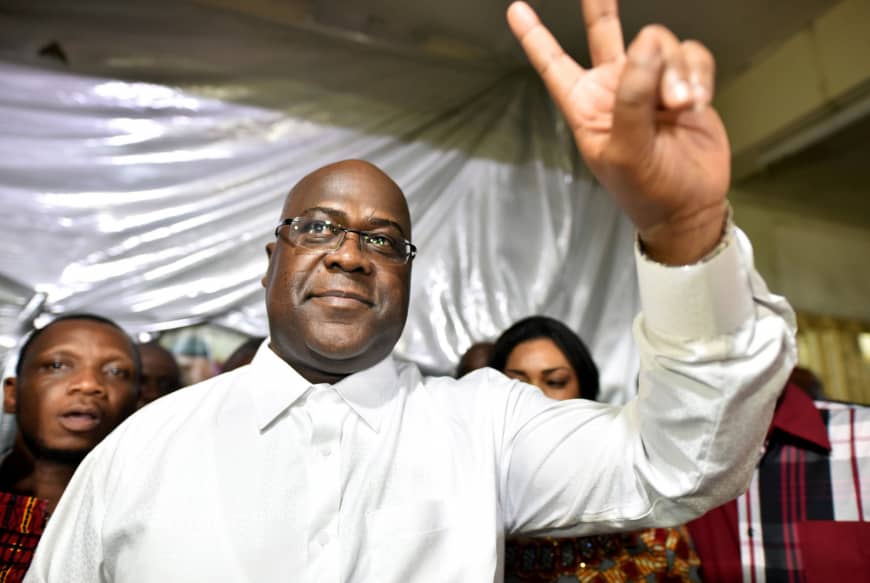 Second-placed Martin Fayulu accused Tshisekedi and the ruling party of stitching up the result. His move that risks stoking further unrest over the bitterly disputed poll.

Tshisekedi’s supporters were celebrating the court decision in the streets of Kinshasa. Fayulu says the results were the product of a secret deal between Tshisekedi and outgoing President Joseph Kabila to cheat him out of a win of more than 60 percent.

Kabila’s camp and Tshisekedi’s denied making any such deal. The president of the constitutional court, Benoit Luamba, rejected the challenge as “inadmissible.”

The provisional results in the election, which was meant to enable Congo’s first democratic transfer of power in 59 years of independence from Belgium, showed Tshisekedi winning with a slim margin over Fayulu. Kabila’s favored candidate Emmanuel Ramazani Shadary came in a distant third.

“Felix Tshisekedi will become the fifth president of the republic,” Mende said by telephone.

A spokesman for Tshisekedi, Vidiye Tshimanga, said: “We are happy that the voice of the Congolese people has been heard and that a true democratic and peaceful handover will occur.”

If Fayulu’s supporters reject the result, it could worsen unrest that has already seen 34 people killed, 59 wounded and 241 “arbitrary arrests” in the past week, according to the U.N. human rights office.

Congo’s constitutional court is widely seen as beholden to Kabila, who has been in power since his father was assassinated in 2001.

Independent monitors have flagged major flaws, including faulty voting machines and polling stations at which many were unable to vote. The Catholic Church, which had a 40,000-strong team of observers, denounced the provisional result.

A tally from the church reviewed by Reuters from about 70 percent of polling stations suggested a victory of 62 percent for Fayulu, a former Exxon Mobil country manager. Tshisekedi and Ramazani were virtually neck-and-neck second place with 16.93 percent and 16.88 percent, respectively.

The African Union (AU) called for final results to be postponed. The AU, which often sits on the fence when it comes to mediating internal conflicts of member countries, cited “serious doubts” about the election’s credibility.

Accusations of cheating are not new to elections in Congo, which was ruled by kleptocratic dictator Mobutu Sese Seko for 32 years before tumbling into chaos and war in the late 1990s.

Foreign powers have overlooked alleged crookedness in past polls for the sake of stability in a country where two wars sucked in multiple African armies and killed millions.

Congo’s vast interior is a vital source of copper and other metals, including cobalt, used in electric car batteries and mobile phones.

Yet the scale of the alleged rigging in December’s election has stoked fears the vote could degenerate into renewed street fighting or another regional conflict.

The country of 80 million is one of the world’s poorest, and the frustration and hardship in the slums of the capital Kinshasa quickly boils over into violence.

However, most of the opposition to Kabila in the capital has been harnessed by the party of Tshisekedi, whose supporters are celebrating. His father Etienne Tshisekedi was a popular opposition figure before he died last year.