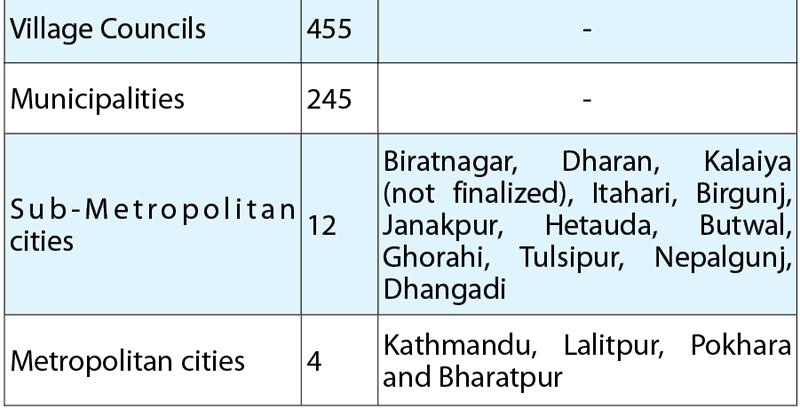 Yet to fix special, protected or autonomous areas
KATHMANDU, Dec 29: The commission formed to restructure local units under the new federal system is all set to submit its final report to the government and has fixed as many as 716 local units across the country.

The commission has fixed Kathmandu, Lalitpur, Pokhara and Bharatpur as metropolitan cities while Biratnagar, Dharan, Kalaiya (not finalized), Itahari, Birgunj, Janakpur, Hetauda, Butwal, Ghorahi, Tulsipur, Nepalgunj, and Dhangadi have been fixed as sub-metropolitan cities, according to the source.

Officials of the commission, however, said that the number of village councils that has been fixed by the commission so far could be changed as lawmakers from Bajhang and Syangja have been pressuring to increase the number.

The commission said that it has fixed service center of each of the local units keeping in view of public access to the center.

"The service centers recommended by the commission in mountain region can be reached in maximum four hours, three hours in hill region and two hours in tarai area," said the official.

Though the commission has fixed the numbers and boundaries of the village councils and municipalities, it is yet to fix special, protected or autonomous areas,” added the official.

"We will fix the areas later as the government asked us to fix village councils and municipalities in the first place and submit the report to pave way for local polls. We will fix the areas after submitting the report to the government but they will be fixed before mid-March, 2017," said Sunil Ranjan Singh, a member of the commission. The tenure of the commission will expire in mid-March.

The commission has already sent a letter to the prime minster to schedule an appointment to submit its report on new local units. Once the commission submits its report to the government, the existing local setup will automatically transform into the village councils and municipalities created by the commission.

Commission to begin work on local units in Province 2 Sunday

KATHMANDU, Nov 23: The commission formed to restructure local units under the new federal system has decided to begin the task... Read More...