Coloring through the blues 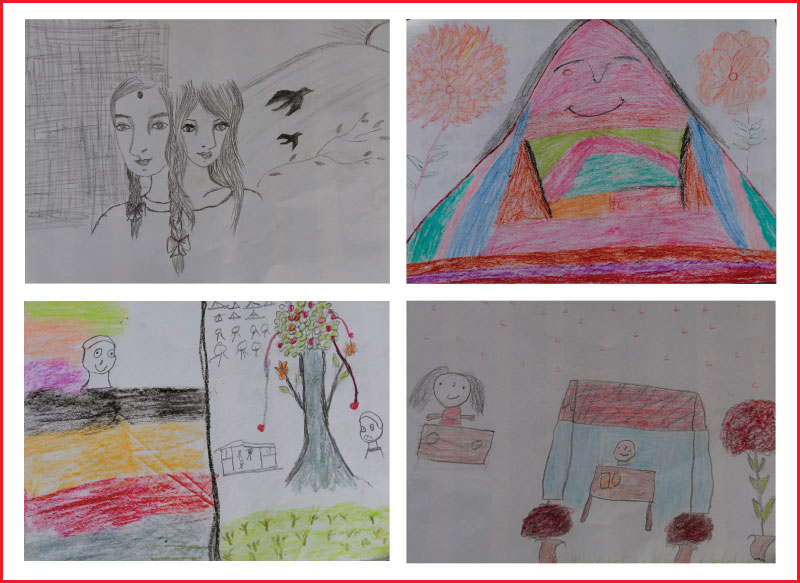 Rupa Manandhar* couldn’t understand why she was being handed a sketch book when she was actually promised a counseling session. As a victim of human trafficking, her adolescence was full of turmoil. With a menial job and support from her new friends at the organization Shakti Samuha, she might have regained her footing now but she is still struggling to come to terms with her unfortunate past. It’s the reason she dutifully participates in various workshops and activities that her organization lines up for victims like her. But a sketch book? Manandhar couldn’t even remember the last time she had drawn something.

However, art therapist, Lajja Dixit had her reasons. In her years of experience as a therapist, she has solely relied on art to unlock the complexities of mental issues. She claims it to be the most effective tool to dig out the root causes of any individual’s distress.

So the ongoing ‘The true stories’ program enlisted art therapy as one of their activities. The organizers are hoping to help trafficked victims heal by providing them a safe space to confront their past and help them develop enough confidence to move forward in life. Manandhar is one of their participants and as Dixit looked down at her and the group’s artwork, she immediately saw some telling signs.

Most of the subjects in the pictures are alone or aloof even among crowds. Almost all of the participants also avoided drawing the lower half of their character’s bodies. Further, even when Dixit gave them different scenarios to draw, these themes continued.
“There is a lot that is repressed in our subconscious. At times we may not even realize these things. That’s where art comes in. It can really showcase a person’s state of mind. As an art therapist, it is my job to interpret the meaning of your drawings and help you see things about yourself that you otherwise may not have realized,” explains Dixit.

During her sessions, she has her clients sit on the floor with their drawing materials. She feels that chairs make the process feel too rigid so they are nowhere in sight, just plenty of open space around. The ambience is set to make the clients feel as relaxed and comfortable as possible. This is also the reason why there is often some soft instrumental music playing in the background. Dixit even suggests some breathing exercises before they begin. She asks her clients to clear their mind before giving them a minute or so to think about certain scenarios. Then they are asked to draw it on paper.

Manandhar reveals that she was amazed by the accuracy of Dixit’s observations. She shares, “I felt emotions that I didn’t know how to put in words myself. But when the art therapist told us what she saw in our drawings and what they could mean, it made sense. Even if some participants felt differently, it led to all of us joining in on a discussion. The art turned out to be a brilliant starting point.”

Art therapy is still a relatively new concept in our country. In fact, Dixit hasn’t heard of any other therapist in Nepal who incorporates the practice in their counseling sessions. But word of its effectiveness is quietly spreading among the masses. It’s not only programs like ‘The true stories’ that are seeking Dixit’s services.

“Art therapy can be used to treat a variety of scenarios. I have concerned parents, and schools to stressed out businessmen and depressed youths as clients. It starts with a consultation. Often people state how they are feeling, what they think might be the problem. Then based on what they tell me, I set themes for them to draw. As we go about drawing as well as discussing their pictures, eventually we realize the root of the problem. It’s after this realization that we begin the counseling,” explains Dixit.

She also shares that there has never been a case where her art therapy sessions have failed to draw a conclusion. In her experience, the answers are always there and it is only a matter of figuring them out. Sangeeta Magar* attests to this degree of efficiency. Her 11 year-old-son continuously complained of terrible headaches. In search of a diagnosis, she had visited everybody from a neurologist, ENT to even a psychiatrist. By the time she decided to try art therapy, her son had even begun taking antidepressants.

“We had several counseling sessions but we never got a concrete answer. Everything seemed to be assumptions. But it took just one session of art therapy for us to figure out the reasons behind my son’s pain. Unlike other therapy sessions, here he wasn’t bombarded with questions. All he had to do was draw so it seemed that he felt considerably at ease. The art therapist was talking to him rather casually as well and before we knew it, we had an answer,” says Magar.

Apparently her son was having problems with a teacher at his school. Dixit was able to interpret this through a series of his drawings. Then after talking to the boy at length, she got her confirmation. His parents and the school faculty were able to address the issue and soon enough, his headaches disappeared as well.

While art therapy is particularly famous for being effective with children and students, adults alike have had just as good results.

“Initially adults are almost always concerned about their drawing skills. They fear it is not up to the mark. But I can assure you, your ability to draw has nothing to do with art therapy. Sometimes as we grow up we become very good at blocking emotions or living in denial. Art is a great way to help them lower their guard and make them realize the feelings and thoughts that have been festering in them for ages,” says Dixit.

In case of Dristi Pradhan*, the art therapy sessions actually turned out to be a bit of a lifesaver. Pradhan doesn’t hesitate to reveal that a little more than a year ago, she felt trapped in her life. She was bullied in school and her self esteem was dangerously low. She was even holding herself back from pursuing a career of her choice because she felt she wouldn’t succeed. But despite being overwhelmed by these feelings, she couldn’t understand why she had them.

“It is easy to dismiss art especially when somebody suggests it as a tool to overcome mental issues but my experience was a positive one. First of all, the process of drawing and making art made it feel like it wasn’t a strict therapy session. Then there were the results. The conclusions that I reached with the art therapist were so enlightening. It was like peeling away the layers of my various complexes,” shares Pradhan.

As Dixit puts it, art is patient. Therapy based on its practice might still be a foreign concept but the benefits seen so far make it worth exploring as a catalyst for healing.
*names changed

KATHMANDU, Dec 28: Are you fed up staying in queue for hours simply to submit your applications at different government offices?... Read More...