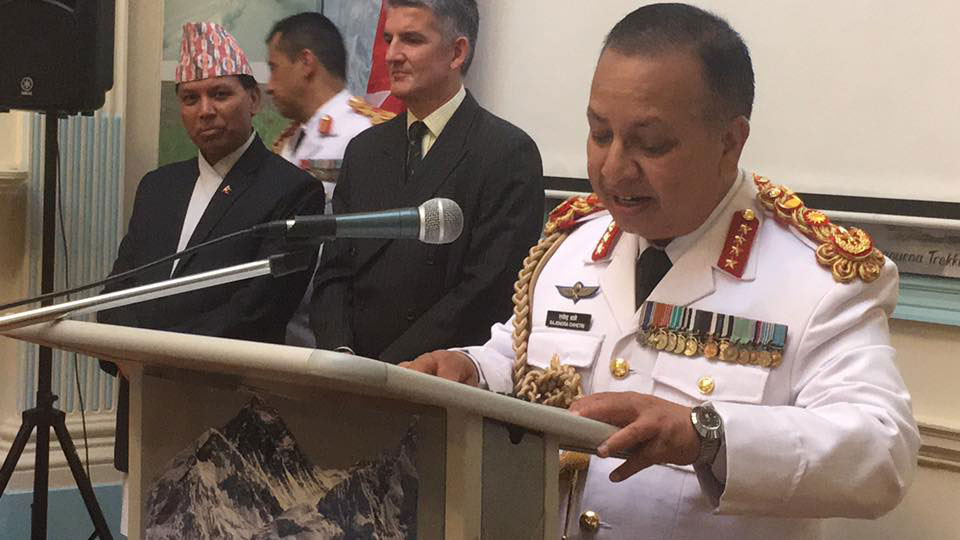 LONDON, July 11: Chief of Army Staff (CoAS) Rajendra Chhetri has arrived in London after participating in the 2nd Summit of the troops contributing countries held at the United Nations headquarters in New York.

CoAS Chhetri is scheduled to hold meetings with Defense Minister of the United Kingdom, Chief of the General Staff and senior military officers.

Britain has been assisting the Nepal Army in its technical aspect as well in military trainings.

The Nepal Army was unhappy with the British Army after the British police arrested Colonel Kumar Lama in 2013 on the alleged charge of torturing captives during the Maoist armed insurgency.

The Nepal government had rejected the offer of the British government to send three choppers for the relief distribution during the mega earthquake in 2015.

Media had reported that British government had suffered a loss of around 3 million British pounds while awaiting the permission from the then Nepal government.

This is the first time the high ranking Nepal Army official is visiting Britain after a British court gave a clean chit to Col. Lama.

The meeting focused on the existing relations between the two militaries, military trainings and technical support.

Nepali Embassy in London had also hosted a dinner reception for CoAS Chhetri  on Tuesday evening.

Speaking on the occasion, Nepali Ambassador to Britain Dr. Durga Bahadur Subedi said Nepal Army has been contributing to the world peace since 1958.

Chhetri said Nepal and Britain have been enjoying an intimate relationship not only at the military level but also at the people-to-people level for the last 200 years.

CoAS Chhetri will visit the headquarters of the Brigade of Gurkhas and the various military units before returning home on Friday.

CoAS Chhetri off to Congo

CoAS Chhetri off to US

KATHMANDU, May 17: Chief of Army Staff General Rajendra Chhetri on Wednesday left for the United States of America on a... Read More...