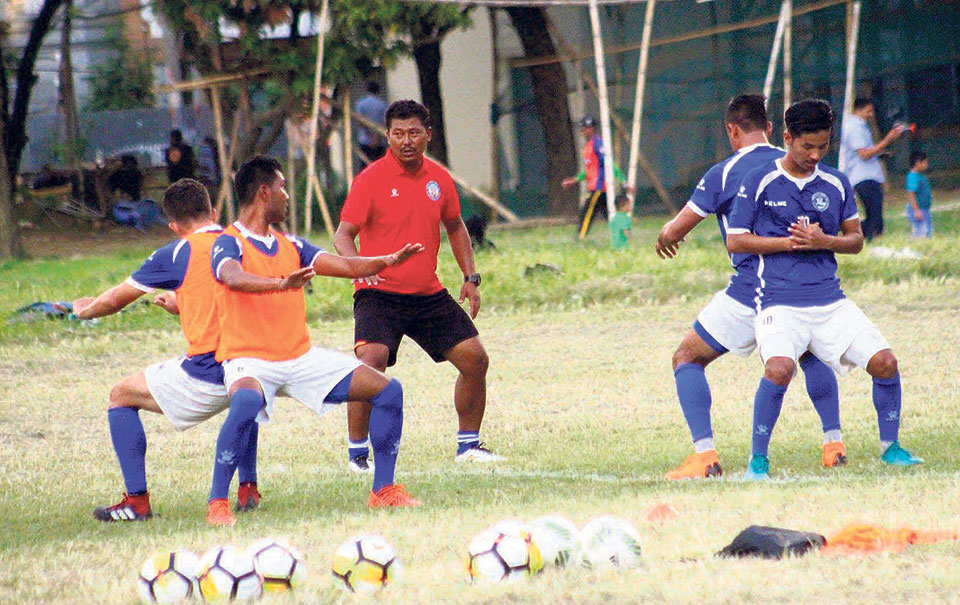 KATHMANDU, Sept 6: Nepal national football team suffered back-to-back losses in the opening matches in two consecutive SAFF Suzuki Cup editions, this time at the hands of Pakistan with a scoreline of 2-1, on Tuesday.

Nepal will now play against Bhutan in its second Group A match on Thursday at 3:45 pm, which can be a vital game to get three points and stay in contention for the semifinals of the tournament, which the team failed to reach in 2015.

Although head coach Bal Gopal Maharjan expressed his pre-tournament confidence of winning the trophy for the first time in Nepali football history, boasting of his side’s ‘trophy winning caliber’, the team has not been able to win any matches under him so far.

Nepal, who also participated in the men’s football, lost all its Group D matches at the recently concluded Asian Games, conceding to Japan, Vietnam, and Pakistan.

Maharjan had said that the performance of the Asian Games was just a test for the tournament, which is also known as the

SAFF Championship, citing that the team who played at the Asian Games comprised most U-23 players.

Nepal started the match with a quite positive start pushing hard for the ball, controlling the possession and testing the Pakistani team from the flanks largely led by teenage full-back Suman Aryal, who made his debut against Pakistan.

Despite playing much with the ball, Nepal failed to cause any problem to the Pakistani defense, who cleared almost every ball inside the box.

Veteran Bharat Khawas failed to make his impact again as a starter, while substitute Sunil Bal and Nirajan Khadka, who made his return to the national team after five years, were active in the Pakistani danger area.

Nepal has failed to score goals in recent times except for the sole goal at the Asian Games. It had to struggle really hard to get the finishing against Pakistan on Tuesday.

Pakistan scored the first goal in the game through Hassab Basir from the spot after skipper Biraj Maharjan unnecessarily pushed Muhammad Riaz inside the box.

Despite equalizing through Magar in the 82nd minute, Nepal conceded late in a counter-attack that quite clearly showed Nepal’s tactical ineptness.

Nepal was left open after losing the ball in the Pakistani area and defenders Aryal and Ananta Tamang failed to make their grounds.

A long ball was played inside the box which was headed by Saadullah Khan to Mohammad Ali Dabous, who instinctively provided a finishing head inside the Nepali net, leaving goalkeeper Kiran Chemjong helpless and shouting at his defenders.

Now, the team needs to have a balanced midfield with the clinical forward line. Bal and Khadka played really well in the last game, and an experiment with Khawas and Nawayug Shrestha won’t cause much damage.

The ball inside the box was not much pleasing except some from Aryal, so the team needs to have good deliveries inside the Bhutanese box. Nepal’s deliveries looked really slow in the last game against Bangladesh which it lost 2-0.

‘No plan to retire immediately’
Captain Maharjan, who was punished for his push on Riaz which was crucial in Pakistan taking the lead, is set to be the first Nepali footballer with 69 caps if he plays against Bhutan on Thursday.

Maharjan said he has no plan to retire immediately and that ‘it felt great to have played 68 times for Nepal’.

“We need to give chances to young players. I am looking for a safe landing with football.

It feels great to have played 68 times for Nepal, Maharjan further added, “I have no plan to retire immediately. I will play as long as my body permits.’’

Maharjan was of the view that he was confident of his side’s qualification to the semifinals but expressed his sadness for losing the match in the dying moment.

“It was very important match for us. Sadly we lost the match as we wasted so many chances. We couldn’t control our game in the dying moment,’’ Maharjan explained.

“Anything can happen in football.  We can still go through if we win our two remaining matches.’’

KATHMANDU, Oct 17: Nepal, which had made it to the final of the South Asian Football Federation (SAFF) Championship for the... Read More...

KATHMANDU, Sept 20: Nepal has improved by one point in the latest FIFA ranking. ... Read More...