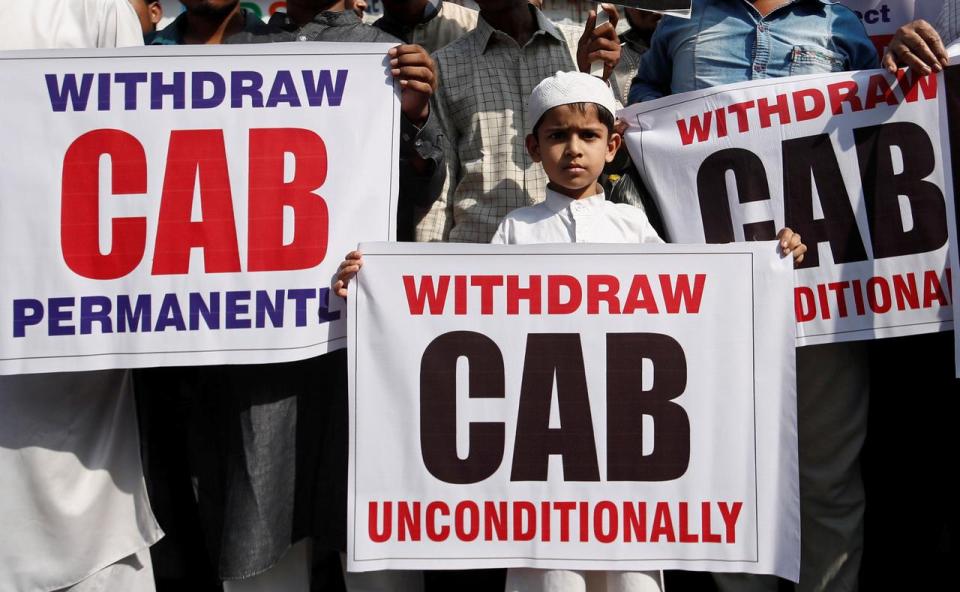 A boy holds a placard during a protest against the Citizenship Amendment Bill, a bill that seeks to give citizenship to religious minorities persecuted in neighbouring Muslim countries, in Mumbai, India December 13, 2019. REUTERS/Francis Mascarenhas

NEW DELHI, Dec 13: Violent clashes erupted in Delhi between police and thousands of university students on Friday over the enactment of a contentious new citizenship law, with the unrest leading Japan’s prime minister to cancel a planned visit to India.

The new law offers a way to Indian citizenship for six minority religious groups from neighbouring Bangladesh, Pakistan and Afghanistan including Hindus and Christians, but not Muslims, which critics say undermines India’s secular foundations.

Police fired tear gas and used baton charges to disperse scores of students demonstrating at Jamia Millia Islamia university in the heart of Delhi over the law.

Protesters attacked cars in the capital, and several people were injured and taken to hospital.

Zakir Riyaz, a PhD student in social work, said the new law made a mockery of India’s religious openness.

“It goes against the whole idea of a secular India,” he said, speaking by phone from the Holy Family Hospital in New Delhi where 15 of his fellow students were admitted after being injured in a police baton charge.

Mirror Now showed footage of students standing on top of barricades and police trying to force them away.

The United Nations human rights office voiced concern that the new law is “fundamentally discriminatory in nature”, and called for it to be reviewed.

Two people were killed in India’s Assam state on Thursday when police opened fire on mobs torching buildings and attacking railway stations in protest at the new citizenship rules signed into law on Thursday.

Japan’s Prime Minister Shinzo Abe cancelled a trip to Assam for a summit with his Indian counterpart Narendra Modi that had been due to begin on Sunday.

Japan has stepped up infrastructure development work in Assam in recent years, which the two sides were expected to highlight during the summit. Abe had also planned to visit a memorial in the nearby state of Manipur where Japanese soldiers were killed in World War Two.

“With reference to the proposed visit of Japanese PM @AbeShinzo to India, both sides have decided to defer the visit to a mutually convenient date in the near future,” Indian foreign ministry spokesman Raveesh Kumar said in a tweet.

Japan’s Chief Cabinet Secretary Yoshihide Suga said both countries would decide on the appropriate timing for the visit although nothing has been decided yet.

A movement against immigrants from Bangladesh has raged in Assam for decades. Protesters there say granting Indian nationality to more people will further strain the state’s resources and lead to the marginalisation of indigenous communities.

KATHMANDU (REPUBLICA): Amid ongoing rift between the ruling and the opposition parties over Dr Govinda KC’s demands, the president of... Read More...