KATHMANDU, July 10: A group of civil society leaders have urged the political parties and their leaders to pursue their agenda only through the parliamentary route, with full transparency.

Issuing a six-point appeal for constitutional stability on Thursday, they also asked all concerned to give due importance to the role of the parliamentary opposition in the setting up of a government and seeking accountability from it. The civil society leaders issued the public appeal after meeting Prime Minister KP Sharma Oli and the leader of the main opposition party, Nepali Congress (NC), Sher Bahadur Deuba on Wednesday and sharing with them their views on constitutionalism and parliamentary practice.

This comes in the wake of a deepening intra-party dispute within the ruling Nepal Communist Party (NCP) and fear of a fresh round of political instability in the country. “We note the resurgence of foreign interference in national affairs, which had diminished in recent times, but seems now to be spreading beyond earlier bounds,” they said in the appeal. “We must remain alert in the fight to protect national sovereignty and the inalienable rights of the citizens of Nepal.” 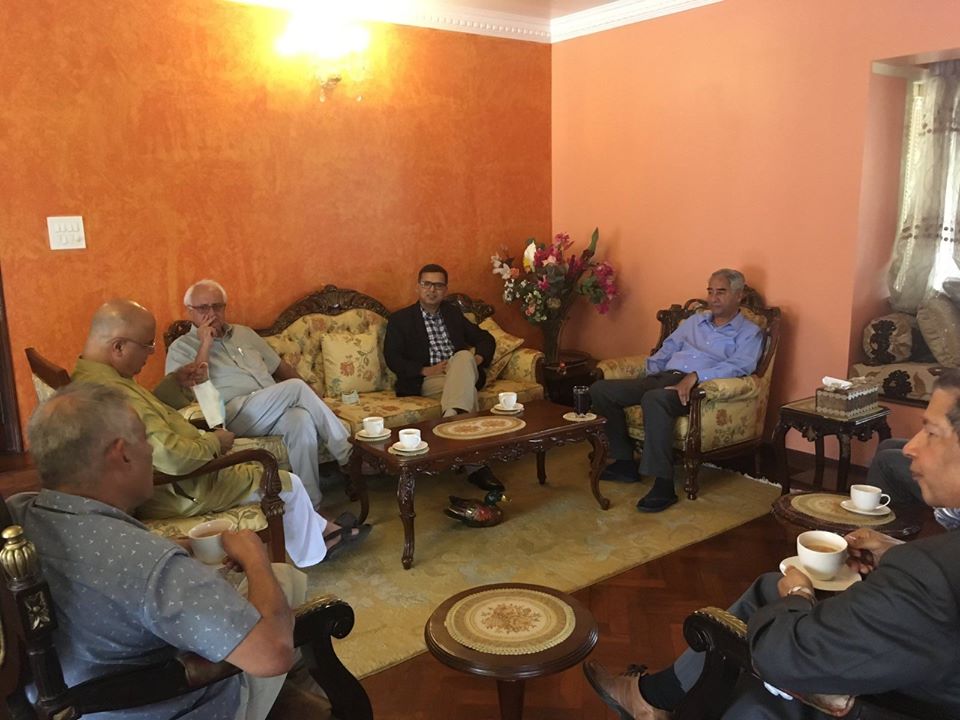 Following ten years of internal conflict and the extended interim period required for its management, the Constitution of Nepal (2015) was promulgated to fulfil the long-standing wish of citizens for peace, democracy and progress. However, even while we are still at the initial phase of implementing the Constitution, the public is witness to the top leadership of the ruling party bent on recklessly endangering political stability, peace and development. Against this backdrop, the undersigned citizens make this public appeal after having met yesterday, 8 July, with Prime Minister KP Sharma Oli as well as the Leader of the Opposition Sher Bahadur Deuba and shared with them our views as follows on constitutionalism and parliamentary practice.

The main objective of the Constitution is to end all kinds of discrimination and exploitation that was the legacy of the feudal, autocratic and centralised governance structures of the past. The Constitution further internalises the values inherent to our multi-ethnic, multi-lingual, multi-cultural and geographically diverse country and, accordingly, seeks to build prosperity on the basis of the public’s commitment to the values of competitive, multiparty democratic governance, liberty, fundamental rights, adult suffrage, regular elections, press freedom, as well as a free, independent and capable judiciary and prevalence of rule of law. Instead of implementing federalism and building the country’s international stature on the basis of these constitutional values, we see the rise of unhealthy rivalry for power and position.

It is the bounden duty of political leaders of all parties to seek to achieve the goals set out in the Constitution through the structures and processes set out in the constitutional provisions. To this end, the role of Parliament elected by the people is paramount, its job to form the government, continuously seek accountability from and scrutinise its working, and to elect a new prime minister if the head of government loses trust of the majority in the House. Under Article 104 of the Constitution, a no-trust motion can be filed by one fourth of members present in the House of Representatives, and the Constitution requires that the motion include within it the name of the Member of Parliament proposed as the new prime minister. The prime minister loses his position if a majority of those present vote in favour of the no-confidence motion. We see no need for a commotion external to constitutional provisions to take away a prime minister’s post, or keep the person in the position. The attempt by leaders of a ‘mother party’ to dislodge its own member who has been elected prime minister through parliamentary process can only give rise of ‘party dictatorship’, besides the fact that the Constitution of Nepal does not envisage such as system.

The Constitution lays out parliamentary procedure clearly on how a prime minister is chosen. The arrangement is for members of Parliament who have got elected on the basis of the party manifesto to themselves elect their parliamentary party leader. The parliamentary party leader who gains the majority vote in the House becomes the prime minister, and the person can be changed if he/she loses trust of the parliamentary party. Under Article 93 (3) of the Constitution, even in the event of the Parliament session having been suspended, one-fourth of the membership can demand that the President set the date and time for the House to meet. Thus, the road is clear for members to express dissatisfaction against the government, or bring a no-confidence motion against a sitting Prime Minister.

The public’s trust as well as the elected representative’s position is undermined when a prime minister is sought to be removed through a process that bypasses Parliament and parliamentary process, through horse-trading and other extraneous activities outside the purview of the House. It is time to ponder: such activity can never provide stability that the country so badly needs, nor deliver the transformative agenda sought by the citizenry. The ongoing attempt to weaken a sitting prime minister through non-parliamentary means denies the parliamentary opposition it role of putting forward alternative leadership to run the government. Simultaneously, as we see happening today, such exercise allows foreign interventionism in the polity as well as the extra-constitutional activities by non-political elements.

We note with distress that the national political leadership is acting as if it is unaware of the dangers confronting our society, even as the youth grow restless observing the shenanigans of those in power. While the Covid-19 pandemic is spreading to all parts of the country including Kathmandu Valley, the season of floods and landslides is upon us and requiring a Government at the ready. Indeed, the primary focus of the political class at this moment should have been to address food scarcity, public health concerns and the challenges to livelihood. Instead of addressing the citizens’ distress, the topmost level meetings of the ruling party are dedicated entirely to naked power struggle. With topics of public interest thus trapped in a party’s internal power play rather than entering the business of Parliament, the workings of the Government is bound to suffer even more in the days to come. We urge the parliamentary opposition to be alert to this unacceptable state of affairs.

Against this backdrop, we remind all political parties and the respective leaders of existing constitutional provisions and to pursue their agenda only through the parliamentary route, with full transparency. We ask all concerned to give due importance to the role of the parliamentary opposition in the setting up of a government and seeking accountability from it. We note the resurgence of foreign interference in national affairs, which had diminished in recent times, but seems now to be spreading beyond earlier bounds. We must remain alert in the fight to protect national sovereignty and the inalienable rights of the citizens of Nepal.

KATHMANDU, July 31: With the start of an ‘ideological polarization’ among the leaders of the erstwhile CPN-UML and the CPN... Read More...

KATHMANDU, Jan 17: Expressing concern over prolonged delay in convening the House of Representatives because of differences within the ruling... Read More...

KATHMANDU, June 5: A secretariat meeting of Nepal Communist Party (NCP) on Tuesday failed to decide about work division among the... Read More...