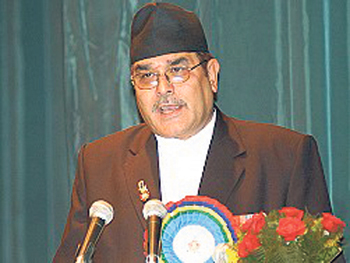 KATHMANDU, Aug 8: The Commission for Investigation of Abuse of Authority (CIAA) and its chief commissioner, Lokman Singh Karki, have been not only defying the orders and verdicts of the Supreme Court but also trying to drag the judiciary into  controversy.

Issuing a final verdict in a writ petition filed by Senior Advocate Shambhu Thapa against the CIAA's raiding his law firm, a division bench of then Chief Justice Kalyan Shrestha and then Justice Sushila Karki on January 11  asked the anti-graft body to limit itself within its actual jurisdiction.

"Unless investigations conducted within its jurisdiction yield a justification, the act of conducting a raid could infringe the jurisdiction of others and hinder legal and fundamental rights," the apex court had stated in its verdict.

The apex court had also warned the CIAA and Chief Commissioner Lokman Singh Karki not to interfere in an individual's professional rights and dignity and the right to confidentiality, without first conducting basic investigations and reaching a proper conclusion therefrom.

The bench had also noted that the CIAA had raided Thapa's law firm without taking a formal decision to that end, without showing sufficient evidence and justification, and solely through the issue of a written directive. The Department of Revenue Investigation (DRI) had raided the Legal Advisor Forum -- Thapa's law firm -- in September 2013 on a charge of tax evasion, after the CIAA issued the directive.

Although the apex court has set a precedent in Thapa's case, the CIAA and its chief have been defying such court orders. In addition, the new Constitution promulgated last September has limited the CIAA's jurisdiction  to investigating cases of corruption perpetrated by individuals in public positions. The Constitution has withdrawn the authority to investigate acts that are merely improper from the CIAA's jurisdiction.

However, the CIAA has frequently overstepped its jurisdiction and the court has issued it orders to stop that.

The single bench of Justice Om Prakash Mishra on August 5 reminded the anti-graft body of its jurisdiction. Responding to a writ petition filed by Krishna Bahadur Silwal of Nalang VDC in Dhading district, the bench stated that the CIAA overstepped its jurisdiction while ordering Dhading Land Revenue Office  to transfer the ownership of some disputed land from Silwal to the government.

Likewise, the single bench of Justice Ananda Mohan Bhattarai on August 6 reminded the anti-graft body that the new Constitution  has not included within the jurisdiction of the CIAA any investigation of 'improper acts' although the Interim Constitution had mentioned such jurisdiction.

The bench not only reminded the CIAA of its jurisdiction but also issued a stay order not to take forward an action against seven professors at the Institute of Medicine (IoM). The professors had been asked to furnish clarifications by Tribhuvan University concrning improper acts, after being ordered to do so by the CIAA.

Likewise, the CIAA ordered the government to seize land owned by the family of noted journalist Kanak Mani Dixit in Lalitpur district. Although the Supreme Court on Wednesday issued an interim order not to execute the CIAA order for now, Lalitpur District Land Reform Office, under immense pressure from the CIAA, decided to seize 18 ropanis of land owned by the Dixit family. The land was seized on the ground that it was in excess of the government-set ceiling.

Besides overstepping jurisdiction, CIAA chief Karki has also been dillydallying over acknowledging a show cause notice issued by the apex court in a contempt of court case. Responding to the contempt of court case filed by Dixit's wife Shanta, the single bench of Justice Govinda Kumar Upadhyay on July 11 ordered Karki to furnish a written reply within three days of receiving the notice why the court should not take action against him. However, court staffers say that the CIAA chief, instead of acknowledging the court notice, has been avoiding the court messenger by not allowing the messenger to enter the CIAA premises.

Besides defying court orders, CIAA chief Karki also tried to drag Chief Justice Sushila Karki into controversy. The CIAA chief  on June 12 filed a plea demanding that Chief Justice Karki not conduct hearings at her bench in the contempt of court case brought against him by Mrs Dixit. The CIAA chief had submitted an application at the court arguing that then Acting Chief Justice Sushila Karki was a relative of his within the seventh generation and that a provision on court management under the existing Civil Code prevents a judge from looking into cases involving such relatives.

However, the single bench of Chief Justice Karki rejected the plea, stating that the provision in the Civil Code only prohibits a judge from looking into cases of relatives who come within the rights of inheritance.  The bench had also stated that the contempt of court case was against the CIAA chief in his institutional capacity and no existing law bars her from hearing cases against the CIAA or its officials in that capacity.

Staffer with SC notice for CIAA chief goes out of contact

KATHMANDU, Oct 6: A staffer of the Supreme Court (SC), who was assigned to deliver the court’s notice on Lokman... Read More...