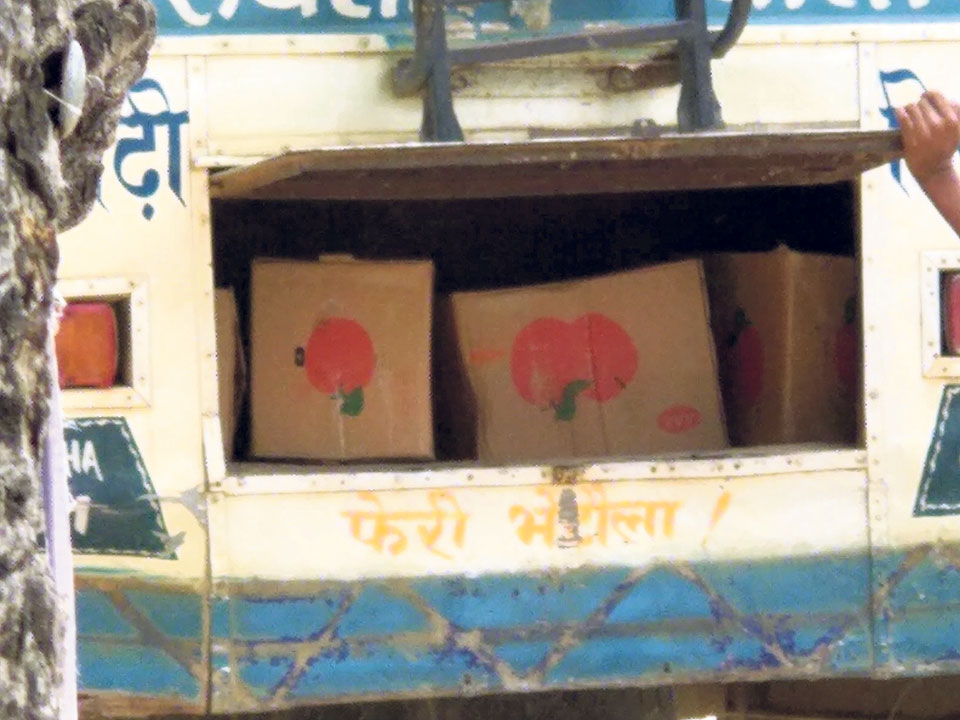 Chinese apple being carried on a public vehicle along the Lahan-Thadi route in Siraha. Mithilesh Yadav/Republica

THADI, May 6:After a respite of a week, smuggling of Chinese apples has started again in Siraha, by changing routes and vehicles. Following the publication of a news story about the smuggling of apples a week ago, the smugglers have found new routes starting from the town of Lahan.

Apples are now being smuggled towards the Nepal-India border at Thadi and Bariyarpatti, using public vehicle, via the Lahan-Bhagwanpur-Thadi and Lahan-Sukhipur-Bariyarpatti routes. Chinese apples are prohibited to be supplied to India via Nepal. Hardly 10 kilograms of apples are consumed in the markets of Thadi and Bariyarpatti. However, everyday 100 to 500 cartoons of apple are being stored at the border side, according to locals.

Smugglers first store the Chinese apple at Lahan, brought from several parts of Nepal, and transport those apples to the border side. After that, they supply apples to India if they got the signal that they are safe from police. Locals have claimed that security forces and custom officers might have involvement in the smuggling as they act indifferent toward it. According to the locals, apples are being supplied to Laukaha and Khutauna of India from the border side.

Not only apples but alcoholic beverages are also being smuggled to India from Nepal as alcohol is banned in the Indian state of Bihar. Several prohibited goods are being supplied to India through a set-up with the security agencies. "We have to follow the commander's direction. We cannot stop even if they are supplying apples, alcohol or petrol to India, when it comes through our commanders," said a police officer from the Bariyar border side.

Traders in the district have also claimed that the police themselves are assisting smugglers to supply apples, besides alcoholic drinks and petrol to India. They also smuggle prohibited chicken and lower-quality gas cylinders to Nepal from India. Thaku Yadav, a local from Jhajhapatti, said that many such smugglers are operating along the border. "Starting from morning to night, they are busy supplying things across the border," Yadav added.

Thadi border and Bariyarpatti border of Siraha have custom officers, border outposts of Armed Police Force (APF) and a police station. According to a 1950 treaty between Nepal and India, goods brought from the third country have to be consumed within the country. Going by the treaty, apples imported from China into Nepal cannot be supplied to India.