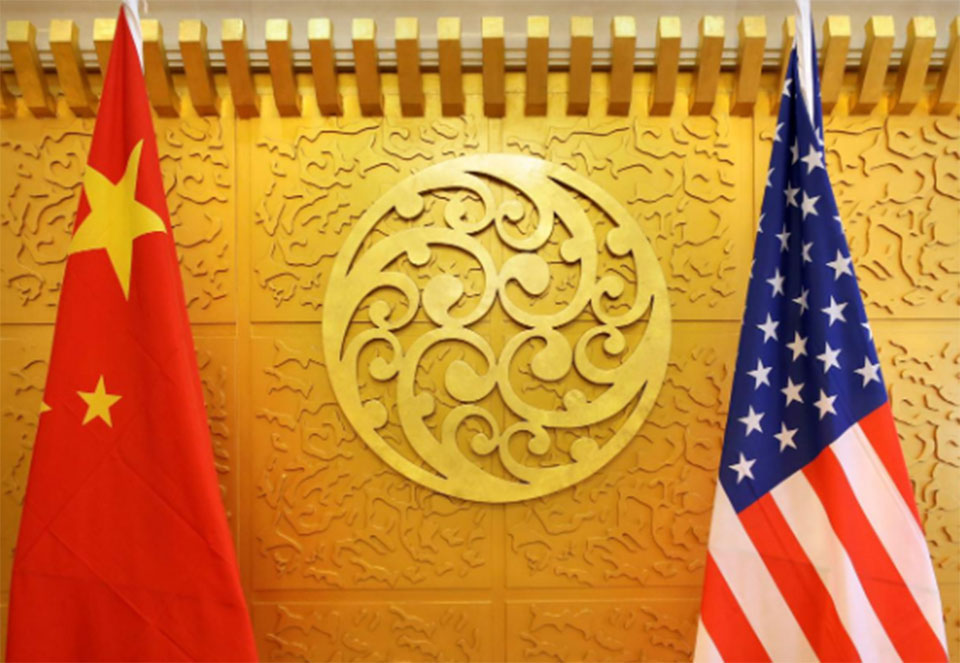 FILE PHOTO: Chinese and U.S. flags are set up for a meeting during a visit by U.S. Secretary of Transportation Elaine Chao at China's Ministry of Transport in Beijing, China April 27, 2018. REUTERS/Jason Lee

BEIJING/WASHINGTON, May 6: China said on Monday that a delegation is still preparing to go to the United States for trade talks, after U.S. President Donald Trump dramatically increased pressure on Beijing to reach a deal, saying he would hike tariffs on Chinese goods this week.

Trump’s comments on Sunday marked a major escalation in tensions between the world’s largest economies, and a shift in tone from the president, who as recently as Friday had cited progress towards a deal.

Stock markets sank and oil prices tumbled on his remarks, as negotiations to end the months-long trade war were thrown into doubt.

“We are also in the process of understanding the relevant situation. What I can tell you is that China’s team is preparing to go to the United States for the discussions,” Chinese Foreign Ministry spokesman Geng Shuang told a news briefing.

But Geng did not say if Vice Premier Liu He, who is China’s lead official in the negotiations, was to be part of the delegation as originally planned.

“What is of vital importance is that we still hope the United States can work hard with China to meet each other half way, and strive to reach a mutually beneficial, win-win agreement on the basis of mutual respect,” Geng said.

The Wall Street Journal reported earlier that China was considering cancelling this week’s meetings in Washington in light of Trump’s comments, which took Chinese officials by surprise.

A less than rosy update from U.S. Trade Representative Robert Lighthizer, including details that China was pulling back from some previous commitments, prompted Trump’s decision.

“The Trade Deal with China continues, but too slowly, as they attempt to renegotiate. No!” Trump said in a tweet.

Trump said tariffs on $200 billion (152 billion pounds) of goods would increase to 25 percent on Friday from 10 percent, reversing a decision he made in February to keep them at the 10 percent rate thanks to progress between the two sides.

The president also said he would target a further $325 billion of Chinese goods with 25 percent tariffs “shortly,” essentially covering all products imported to the United States from China.

MARKET TURBULENCE
U.S. officials did not weigh in on whether they expected talks to go ahead this week. The White House and the U.S. Trade Representative’s Office declined to comment. China’s commerce ministry did not immediately respond to a request for comment.

“The atmosphere of the negotiations has changed,” said a Chinese official with knowledge of the situation.

Whether the talks proceed and how they proceed are issues that are now being re-evaluated, the official told Reuters on condition of anonymity.

“All that depends on the attitude of the United States,” the official said.

Chinese media outlets have been told not to independently report on Trump’s tweets, and instead adhere to any report from the official Xinhua news agency, said a source with direct knowledge of the matter.

Global financial markets, which had been expecting news of a trade deal soon, went into a tailspin. U.S. equity futures fell more than 2 percent and stocks across trade-reliant Asia tumbled, with China’s main indexes plunging 5 percent.

“There is still a question of whether this is one of the famous Trump negotiation tactics, or are we really going to see some drastic increase in tariffs,” said Nick Twidale, Sydney-based analyst at Rakuten Securities Australia. “If it’s the latter, we’ll see massive downside pressure across all markets.”

Mindful of his 2020 re-election bid, Trump had also suggested the duties were not leading to price increases for U.S. consumers. “The Tariffs paid to the USA have had little impact on product cost, mostly borne by China,” he tweeted.

Tariffs on Chinese goods are actually paid to the United States by the companies importing the goods, and most of those companies are U.S.-based. American businesses, while supportive of Trump’s crackdown on China’s trade practices, are eager for the tariffs to be removed, not expanded.

‘HANG TOUGH’
Nevertheless, the president’s aggressive strategy drew rare bipartisan support from U.S. Senate Democratic leader Chuck Schumer, who urged Trump to “hang tough” in a tweet: “Don’t back down. Strength is the only way to win with China.”

One Chinese trade expert said recent signs of resilience in both economies were breeding over-confidence.

“The urgency is gone. So, it’s likely to see a longer trade war,” the expert said, speaking on condition of anonymity citing the sensitivity of the topic.

The trade war resulted in billions of dollars of losses for both sides in 2018, hitting industries including autos, technology - and above all, agriculture, while inflicting collateral damage on export-reliant economies and companies from Japan to Germany.

On Friday, Trump said talks with China were going well..

Treasury Secretary Steven Mnuchin called the round in Beijing “productive,” and one White House official told Reuters that dates were being looked at for a potential meeting between Presidents Trump and Xi Jinping in June.

Last week, industry sources said they believed the talks were in the endgame, but a Trump administration official said aides had told the president that significant hurdles remained.

Negotiations about tariffs have been one of the remaining sticking points between the two sides. China wants the tariffs to be removed, while Trump wants to keep some, if not all, of them as part of any final deal to ensure China lives up to its commitments, a White House official said on Sunday.

Trump: US could tariff iPhones and laptops imported from China