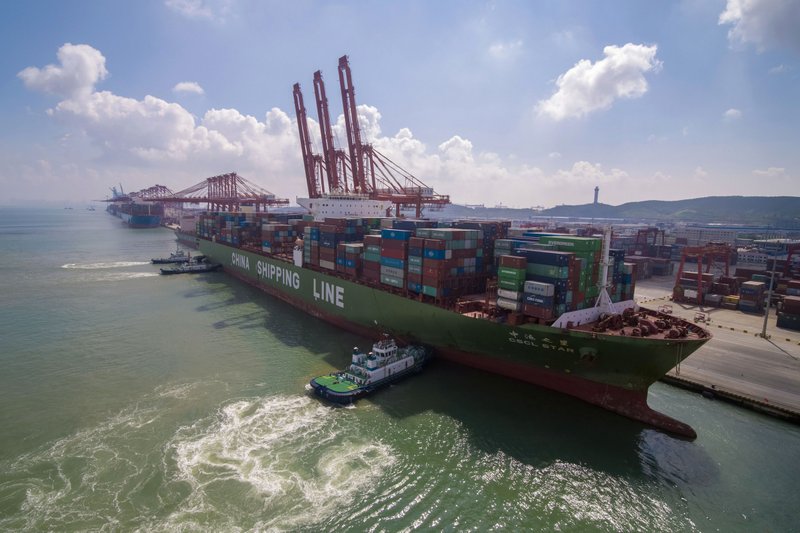 Imports of U.S. goods fell 19% from a year earlier to $10.9 billion, customs data showed Thursday, though that was an improvement over June’s 31.4% fall. Exports to the United States declined 6.5% to $38.8 billion.

Beijing has retaliated for U.S. tariff hikes in a dispute over trade and technology by imposing its own punitive duties and suspending purchases of American soybeans and other goods.

China’s total exports rose 3.3% over a year earlier to $221.5 billion, rebounding from June’s 1.3% contraction amid weakening global consumer demand. Imports shrank 5.6% to $176.4 billion, an improvement over the previous month’s 7.3% decline.

“Shipments in and out of China held up better than expected last month, but a sustained turnaround still looks unlikely in the near-term,” said Julian Evans-Pritchard of Capital Economics in a report.

China’s central bank rattled global financial markets this week by allowing its yuan to weaken to an 11-year low against the U.S. dollar. That would make Chinese goods less expensive abroad but the currency’s 5% decline this year against the dollar is too small to completely offset U.S. tariffs of 25% percent.

China’s global trade surplus widened by 60% over a year ago to $45.1 billion.

The surplus with the United States was little changed but stood at $28 billion, a level that might fuel American pressure for Chinese concessions in trade talks.

Imports of U.S. goods were down 28.3% in the first seven months of 2019 compared with a year earlier, according to the General Administration of Customs of China.

Washington and Beijing are locked in an increasingly costly tariff war over U.S. complaints China steals or pressures companies to hand over technology. The United States and other Chinese trading partners complain Beijing’s plans for government-led development of global competitors in robotics and other fields violates its market-opening commitments.

Trade has weakened since Trump started hiking tariffs on Chinese goods last June. Beijing retaliated with its own penalties and ordered importers to find non-U.S. suppliers.

The fight has battered exporters on both sides and disrupted trade in goods from soybeans to medical equipment.

Trump and President Xi Jinping agreed in June to resume negotiations but talks last week in Shanghai ended with no sign of agreement. Envoys are due to meet again next month.

Economists warn the truce is fragile because the two sides still are separated by the disagreements that caused talks to break down in May.

Trade weakness has added to pressure on Xi’s government to shore up economic growth and avoid politically dangerous job losses.

Beijing agreed last year to narrow its trade surplus with the United States by buying more American natural gas and other exports but scrapped that plan after one of Trump’s tariff hikes. The Chinese government said in June that any purchases must be at a reasonable level, suggested Beijing was becoming more cautious about making big commitments before it sees what Washington offers in exchange.

Importers of American soybeans and other goods are trying to switch to Brazilian, Russian and other sources, but supplies are limited and costs are higher. Farmers who use soybeans as animal feed have been told to switch to other grains.

While American exporters have been hit hardest, Chinese industries including electronics that Beijing sees as its economic future have suffered double-digit declines in sales to the United States, their biggest market.

Economists say even if a settlement with the U.S. is reached, China’s exports this year will be lackluster due to weak global demand, putting pressure on manufacturers that support millions of jobs.