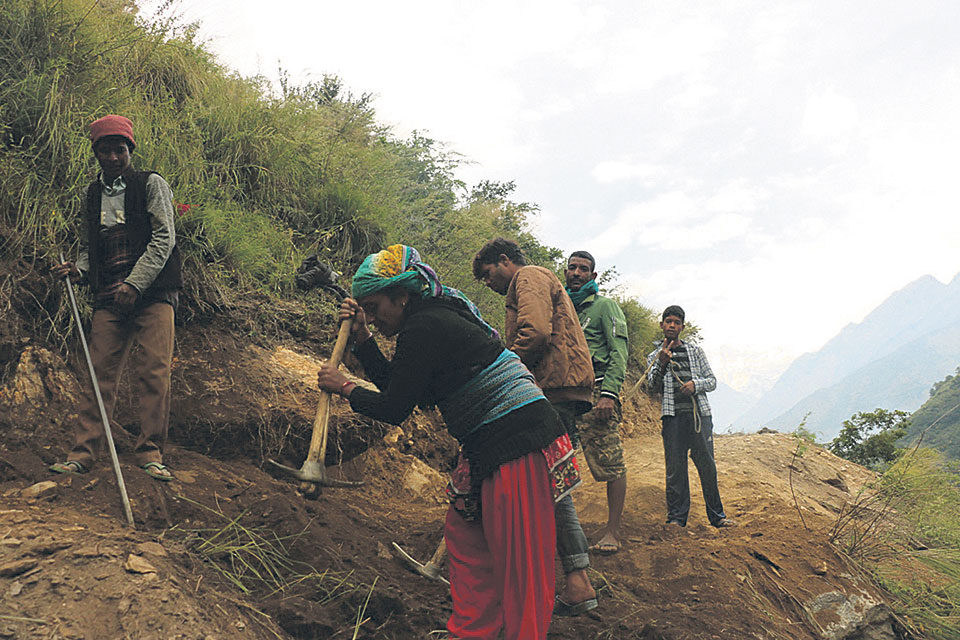 GORKHA, Nov 4: Nepal Army, known for opening track at the toughest sites in the country has taken the responsibility of constructing the Benighat–Larke road track near the Nepal-China border. While the army is busy blasting rocks and leveling the track for further construction, children are also seen working alongside with their elder family members. They carry stones, clear the passage and dig the earth surface. Currently, the army is opening 118 kilometers of the total of 183 kilometers road section.

The army has hired laborers for the project from Dang, Rukum and Rolpa. There are around 25 groups of such laborers who are paid daily wages. And those groups include minors as well.

“I am going to be 16 year-old-old soon,” said Bishnu Bahadur Bali, a local of Tulasipur, Dang. “I am working because I get paid. It is due to poverty, what else!” he added.

Bali studies in 10th grade and his classes are on. Nowadays he doesn’t go to school so that he can work on the road and earn. He is yet to obtain his citizenship.

“My family cannot afford to pay for my academic and other expenses. Whenever I get an opportunity to make money, I go after it,” Bali stated. “They pay us a little less than adult. But its paid employment and we work,” he added.

Child labor is not legal. However, many others of Bali’s age and even younger ones have been working in the groups.

“It is illegal to put children to work. They should be at school. But here they are being used as labor for a road that is being constructed by Nepal Army.  This is very unfortunate,” said Yadu Adhikari, coordinator of Human Rights Network, Gorkha.

“It is disappointing that this thing is happening in a state project. Imagine what happens elsewhere?” he added.

Authorities concerned should immediately check the matter and free the children of work, he suggested.

He further claimed that the children are handed over Rs 800 as daily wages though group leader state the amount as Rs 1200 in the register. Thus by employing children a group leader earns Rs 400 per day from each of the children employed in the group.

Major Nishant Chhetri, an engineer for the army working on the project, expressed ignorance about the claims. He said that the matter would be probed. If anything wrong is happening at the work site; that would be corrected, he said.

Chhetri also talked about the scarcity of workers. Since the construction work is very risky, few love to do it. “We tried to hire local workers as much possible, but only few locals expressed interest. So, we have hired workers from other districts as well,” he said.

Requesting anonymity, an army official, accepted that children have been working on the project. Many of the child labor are working with their family members. If their age is rigorously verified, many of the laborers will prove to be minor, the source claimed.

“By appearance, they may look matured. But there are many who have not yet obtained citizenship because they are still not of age. There are many young boys working on the road. They are working as their team leaders let allow them to work and their family members encourage them to do so,” he elaborated.

Most of the young boys however claim that they are 20. And reportedly, they are told to say so by their leader. There are even minor girls at work and they are seen busy in cooking and collecting firewood.

KATHMANDU, Sept 12: Containers waiting to get the approval to cross the Nepal-China border into Nepal in northern Tatopani point... Read More...

A survey report on ‘Changing State and Prevalence of Child Labour in Carpet and Garment Industries in Nepal: Findings from... Read More...