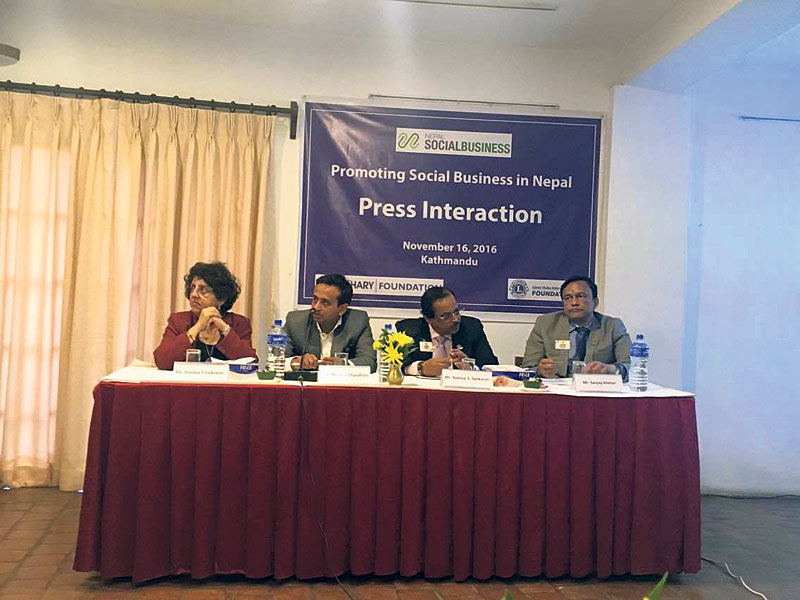 KATHMANDU, Nov 17: Nepal Social Business, a joint initiative of Chaudhary Foundation (CF) and Lions Club International Foundation (LCIF), has financed a total of US$ 180,000 in 12 social enterprises in mid and far western regions of the country.

Organizing a press meet in capital on Wednesday, officials of the NSB said that 12 enterprises from rural areas were chosen for equity investment in the first phase from a pool of 100 social business projects that it had initially incubated. NSB has invested $120,000 for mentoring and training of promoters of the projects that it has incubated, according to NSB officials.

The initiative has also announced that it will be investing an additional $500,000 in 2017 to promote enterprises that can also address social problems at the local level. "The aim of this initiative is to bring a social business movement in Nepal so that business enterprises can solve social problems of the country. The projects are from diverse sectors, including tourism and agriculture, which will be the best investment for the social issues of those particular communities," Nirvana Chaudhary, the CEO of Chaudhary Foundation, said at the press meet "These are the projects that we deal like our own ventures. We supervise their cash flow, profits, business and all other aspects of an enterprise. The only difference is that we do not seek dividend from these enterprises," added Chaudhary.

Also speaking at the press meet, Sanjay Khetan, international director of LCIF, said that the NSB would not charge any interest from its investment and the profit is continuously used for re-investment into the project. "NSB will invest on those upcoming entrepreneurs who have an enterprising mind and zeal to start business with social impact," he added.

Merina Ranjit, the chief operating officer of NSB, told Republica that they plan to fund around 30 projects in the second phase of the investment in various parts of the country including the earthquake-hit districts. "We estimate that these enterprises that we have promoted created nearly 500 jobs," said Ranjit. She also said that many entrepreneurs, who were incubated by NSB but did not receive funding, have benefited from the mentoring and training to continue their businesses.

According to Ranjit, the NSB is also financing and promoting six eco-lodge projects in Dolpa where it has developed a new trekking trail.