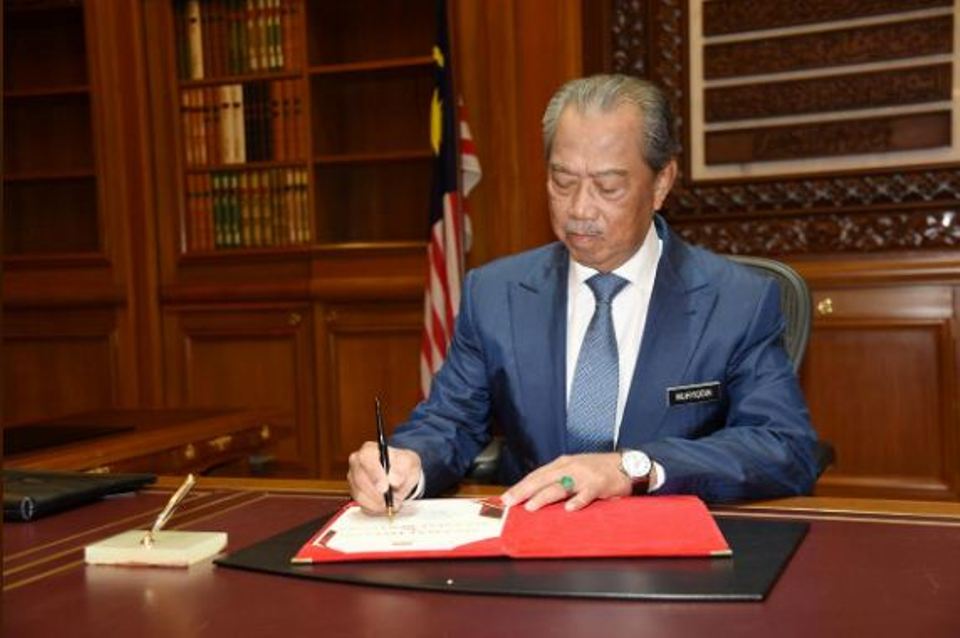 KUALA LUMPUR, March 3: Muhyiddin Yassin was sworn in as Malaysia’s new prime minister on Sunday after a week of political turmoil triggered by the surprise resignation of Mahathir Mohamad, but he has yet to name any cabinet colleagues.

The legitimacy of Muhyiddin’s government, which came with the support of Malay nationalist parties he previously opposed, has been questioned by the opposing camp led by his former boss Mahathir.

Malaysia’s king on Saturday named Muhyiddin, 72, as being the most likely candidate to be able to command a majority in parliament after days of political twists and turns.

Mahathir, 94, disputed the decision saying he instead had the numbers in the 222-member parliament. Mahathir, however, said he had not been able to convey to the palace that he had the majority.

In his first address to the nation, Muhyiddin defended himself.

Mahathir resigned because he had been angered by pressure from supporters of old rival Anwar Ibrahim, 72, to set a timeline to hand power to him as part of a deal reached to fight the last general election together two years ago.

In the end, both Mahathir and Anwar got sidelined by their former coalition partner Muhyiddin, who moved quickly to seek support from people the other two would not work with.

WHAT COULD HAPPEN NEXT?

Muhyiddin’s opponents have called for parliament to reconvene on March 9 as originally scheduled so that his majority claim can be tested.

That, however, will likely not happen, his supporters said, because the new premier needs time to first appoint ministers and focus on reviving the economy that grew at its slowest pace in the fourth quarter.

“By convention, you need a cabinet, and then they need some time to adjust themselves to understand their ministries,” said Wee Ka Siong, a lawmaker from the new ruling coalition. “Then only can they answer questions.”

The last parliament session ended on Dec. 5, and according to the constitution, the first day of the new session must be held within six months of that, which in this case would be by June 5.

Mahathir said a delay in reconvening parliament may give “these very rich and powerful people” in the new ruling coalition time to try and secure a majority.

The return to power of parties that lost the last election may mean a renewed focus on the country’s decades-old positive discrimination policy for majority Malays, who enjoyed preferential access to everything from public financing to a 30% quota for equity holdings in businesses.

Unlike Mahathir’s multi-ethnic government, the new administration may also be willing to put more Malays back into key positions and veer towards religious conservatism in the largely Muslim country.

There have been some low-key protests against the new government by people who have accused it of disrespecting the 2018 mandate, which was driven by popular anger against alleged corruption by parties now backing Muhyiddin.

UDAYAPUR, May 13: Six years ago when Pradip Kumar Chaudhary, 32, of Chaudandigadhi Municipality-5, Sundarpur left for Malaysia in course of... Read More...