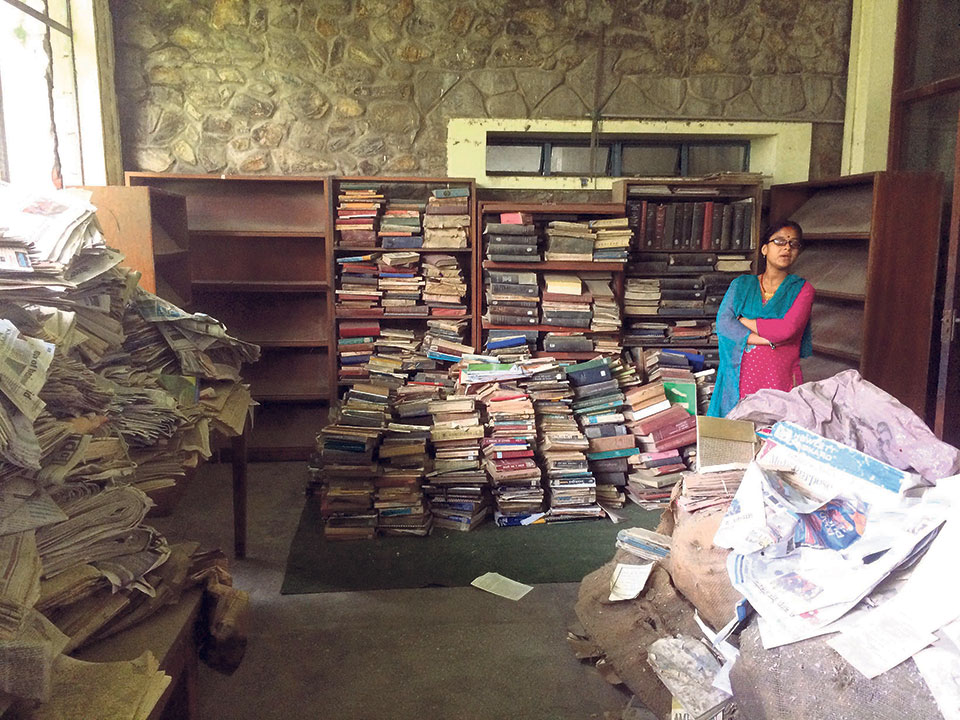 KATHMANDU, Aug 19: The Central Library under Tribhuvan University (TU), despite resuming to normality post earthquake, suffers from a space crunch and is in dire need of library science professionals and software engineers for its smooth operation.

Associate Librarian Purna Lal Shrestha said that with now two annexed buildings and another one soon to be constructed, the library has expanded considerably compared to before. Along with the size, Shrestha said that resources at the library have also increased tremendously with the library now in ownership of over 400,000 books and approximately one million online journals and E-books. “Parallel to the tremendous growth of the library, the number of staffers should have been increased. However, there has been a steady downfall in manpower,” said Shrestha.

Shrestha said that working at a library demands constant assistance to visitors. There are at present twenty-four branches in the library, each requiring at least two staffers for assistance. However, it has been possible to deploy only one staffer to each branch. “If we do not succeed in providing round-the-clock services to our readers, we send a bad message,” Shrestha said trying to explain the urgency of the situation.

Sabita KC, another librarian, said that the earthquake damaged some wings including UN collection, Periodical Section, Acquisition Center, Technical Department, and the Chief of Library’s office.  Though some offices have been moved upstairs, library officials have been forced to continue using some rooms marked unsafe by experts despite its implicated risks. Moreover, reading areas have had to be turned into areas to store the books for safe keeping, leading to an acute space crunch in the library.

However, a plan to build a three storey building with assistance from the Indian Government has now emerged. Designs have been finalized and costs evaluated by graduate engineers of Tribhuvan University and submitted to the Indian Embassy. Shrestha said that a team of Indian engineers made a field just two weeks ago, and that the plan is almost underway.

Despite the evident challenges that the library continues to face, officials have done their best to keep things organized. The library has developed both a manual and database catalog of books, which makes it possible to identify which books are available from home itself. Similarly, there is now a provision of library automation services online which sends details regarding date of issue of a book, any possible fines incurred, or reminders approaching deadlines to readers through email. CCTV cameras surround all corners of the library, and a security alert system has also been installed in library compounds.

Dr Krishna Bhandari Mumukshu, a Nepali Professor at TU, says that he gives the library an equal stance to Saraswati’s (Goddess of Wisdom) Temple. “The ease I experience once I enter the library cannot be acquired anywhere else in Nepal,”Bhandari said. He added that the library is significant in shaping the future of students.

Established in 1959 AD, it is the largest library in the nation, internationally recognized for the resources that it possesses.

The library possesses Master’s level books on all subjects that are a part of TU’s curriculum along with newspapers and journals dating back to 2025 B.S along with some extremely rare pieces that only the library owns in the entire country.

It has been providing services to students, professors, and researchers for almost six decades.

KATHMANDU, July 2: A record of 32 new cases were detected in the Kathmandu Valley in the last 24 hours,... Read More...

KATHMANDU, July 2: The Ministry of Health and Population (MoHP) confirmed yet another COVID-19 fatality on Thursday. ... Read More...