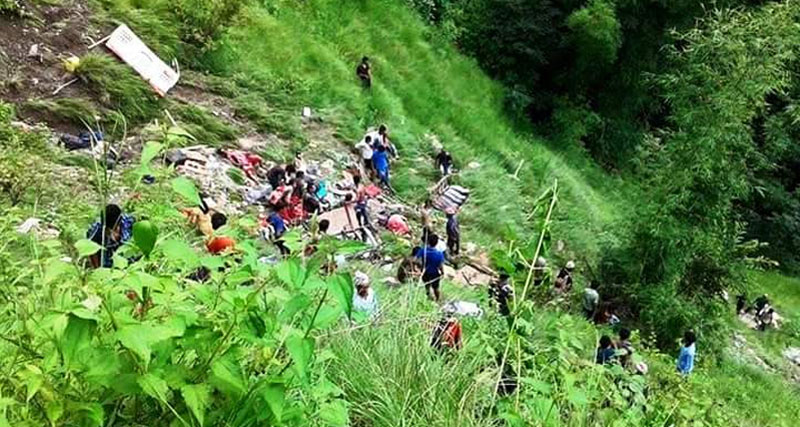 Police with the help of locals collecting bodies of bus mishap victims at Birta Deurali-7, Kavre on Monday. (Madhusudhan Guragain/Republica)

BANEPA, Aug 15: The death toll  in the Kavre bus accident has reached 31. At least  31 passengers have been injured. The injured are being airlifted to Kathmandu by a Nepal Army chooper for treatment.

The incident took place after the ill-fated bus, Ba 2 Kha 106,  heading for Kattike Deurali from Kathmandu skidded off the road and fell some 300 meters down the hill at Birta Deurali-7, Khaharekhola on Monday afternoon.

Some 85 passengers were travelling in the bus, Ba 2 Kha 106, including on the hood.

“We have received information that 25 people were killed in the mishap. Initial repot states that 40 others were injured in the bus accident,” Kayastha told Republica Online.

Sub-engineer Naresh Karki of Kattike Deuralai, who is at the incident site, said that that 25 passengers have died on the spot.

“Till now, 25 dead bodies have been recovered. Rescue operation is underway,” he said.

Karki added that some 40 passengers injured in the mishap have been rescued.

Local Puskarraj Pant said that the most of the deceased and the injured are from Kattike Deurali, Birta Deuralai and Madan Kudari VDCs.

He said that many passengers have been squeezed by the bus wreckage, adding that rescuers need chainsaws to tear down the wreckage.

Pant said that the authorities should send choppers for rescue as it will be difficult to take the injured passengers to hospitals due to bad weather.

POKHARA, April 22: The death toll has climbed to five  as a passenger bus met with an accident at Kagbeni... Read More...