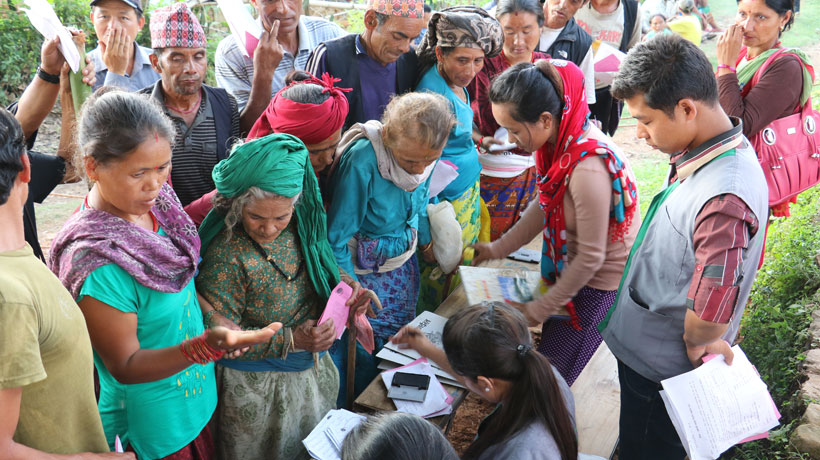 Nearly 9,000 people were killed and more than 22,000 others were injured in the earthquake of 2015 in Nepal. More than 600,000 houses were destroyed and another 290,000 were damaged. It affected around eight million people. Some of them are still struggling to overcome the tragedy and make a living. In the aftermath of the earthquake, the government as well as various international and national humanitarian agencies carried out humanitarian responses from providing immediate relief materials to long-term rebuilding.

During the initial days, the earthquake-affected people were provided with food supplies, sanitary kits, utensils, clothing, tents and other essential commodities. Later on, as the humanitarian responses continued, cash transfer activities were undertaken to meet shelter needs and other basic priorities of the affected people.

Cash transfers in emergencies are considered an integral part of humanitarian responses. In recent years, cash transfers have been massively used in many of the emergency situations in the world, ranging from the famine in Somalia, Typhoon Haiyan in Philippines to earthquake in Haiti, and have proved to be the most appropriate and feasible modality of relief efforts. Nepal’s case was similar too.

During the earthquake response, the country witnessed a flow of cash transfer programs in the quake-hit areas. Though the use of cash transfer in emergency is still a new concept in Nepal, it has a growing recognition in humanitarian responses globally. Evidences show it is a highly successful program. Response to the Typhoon Haiyan is considered to be an example of a larger-scale cash transfer program implemented by a number of actors.

Cash transfer is basically giving money to people instead of in-kind aid like food, allowing them to buy goods and services according to their needs. In an emergency setting, it is the delivery of money in the form of relief to affected individuals or households intended to cover their basic needs —food and non-food items or services — and to buy assets essential for their livelihood.

However, an effective and efficient delivery of such humanitarian aid is predominantly determined by several factors such as geographical feasibility, proper infrastructure, functioning market and access to financial service provider, among others.

Nepal has a quite notable history of cash transfers for different programs. Over the years, the government and international agencies have incorporated cash transfer as one of the components of social protection programs. They were also engaged in a variety of cash transfers, some of them intended to increase communities’ resilience to disasters. The government has been providing cash grant through social pension and allowance to widows, elderly and people with disabilities since mid-1990s. It was expanded during the post-conflict situation targeting Dalits, children, ethnic minorities and other vulnerable groups.

In order to enhance food and nutrition insecurity of vulnerable households, World Food Program has been implementing cash transfer in different parts of the country, mostly through its cash-for-work program for many years, and in the aftermath of the earthquake the affected people were largely benefited with cash support. Likewise, survivors of floods, landslide, and the conflict have received cash grant from the government and international organizations in the last decade.

During the earthquake response, various international organizations, including the United Nations, and the government integrated cash transfers into their programs and used different modalities to assist the affected population. Cash aid made up approximately 10% of overall response to the Nepal earthquake by the international community with over USD 28 million delivered by the UN and more than 30 INGOs until the end of the response phase (November 2015).

The government led the way doling out along more than 70% of the total cash spending — over USD 70 million (including emergency response support for shelter, compensation and medical support). This percentage might have gone up with further cash disbursement by agencies and the government during the winterization and recovery program. Cash was delivered through a range of programs, including vouchers, direct grant and cash for work during the emergency and response phase.

Humanitarian agencies incorporated cash-for-work activity as one of the appropriate means of cash injection, which have been widely used in the districts, enabling beneficiaries contribute their labor for recuperation of community assets or public work — clearing debris, repairing roads/trail, constructing school building, water system through access to income with standard wage.

Similarly, direct cash delivery or cash grant, including both conditional and unconditional, took place across the affected areas. It commenced with the government’s shelter grant of NPR 15,000 to each damaged households.

Another notable cash activity was the distribution of Multi-Purpose Grant (MPG) assistance of NPR 15000 in the 14 most earthquake-hit districts intended at covering at least 70% of ‘monthly minimum expenditure basket’ of the households for two months.
Most significantly cash transfer was undertaken to supplement the government’s existing social protection programs in the affected districts as an emergency top-up cash transfer. Cash was also part of winterization support for many agencies, including the government, and is still a priority for the agencies in their recovery programming, which are mainly focused on increasing affected households’ access to food, shelter, livelihood and other basic commodities.

The significance of cash transfer program was reflected in the post-distribution monitoring reports, which reveal that the majority of beneficiaries’ preference to cash over in-kind. It shows that the beneficiaries mainly spent the cash grant on shelter, labor and food respectively.

While disbursing cash the agencies adopted different delivery mechanisms, including bank, branchless banking agents, mobile phone companies, local cooperatives, and traders to assist beneficiaries based on their capability and feasibility. The functioning finance system in the affected areas with adequate capacity to provide large scale of payments has remained one of the crucial elements of the cash transfers.

As this was the first ever cash transfer experience in an emergency situation, humanitarian actors have realized that proper targeting, rapid registration of victims, harmonized grant sizes at the national level is key to ensure equity across the affected population and speed up the distribution.

The use of cash transfer in Nepal certainly offers a window of opportunity. It considerably ensures dignity and choices of beneficiaries, enhances their decision-making over resources, empowers women, increases access to technology and financial services and supports market recovery, revitalizes local economy, and contributes towards community livelihood. This could also be a better alternative in remote areas, where access to roads is intermittent.

With improved and new technologies and innovative delivery mechanism, cash transfer reaches beneficiaries even in highly insecure environment. Electronic cash transfers through smart cards and mobile phones have received much attention, as shown by the experiences from Pakistan, Haiti and Lebanon that an effective, secure and transparent process is the mainstay for timely disbursement. This offers the private sector an opportunity to establish themselves as effective partners in establishing a market-integrated response mechanism, exploring new markets and creating innovative products and services. Strengthened collaboration and pre-agreement between the humanitarian actors and financial service providers in the long run would help swift, timely and efficient delivery of humanitarian assistance in future emergencies. Integration of the use of emergency cash transfers through the existing social protection scheme into future humanitarian relief response not only increases efficiency of efforts, but also helps promote resilience.

Cash transfers program during emergency situations, however, may encounter some challenges in Nepal. In a place where infrastructures aren’t good, cash-based intervention requires an extra effort to reach beneficiaries. The limited presence of financial service providers in remote places and people’s limited access to them can be quite tricky. Likewise, poor mobile networks and limited technology might limit the service delivery. There are risks associated with cash transfer such as theft, misuse, corruption, inflation, market distortion etc. However, this could be successfully mitigated with strong mechanisms in place. Better cooperation and coordination between the government and humanitarian actors is a must as there were cases during the earthquake response wherein NGOs either delayed or changed their plans of cash distribution due to a delay from the government.

As the country is geographically prone to disasters, cash transfer program must be integrated into disaster preparedness and contingency plans at the district and national levels and prioritized accordingly. A strong contingency plan and preparedness in place means cash transfer can be the most effective modality of humanitarian response, ensuring timely and quality delivery. Better coordination between and among humanitarian actors, including the government, UN agencies, I/NGOs and donors is key to scaling up relief efforts in an effective way. For this, there must be a robust mechanism of accountability, transparency and monitoring in place.

It is also important to understand that cash transfers are not always the best way to meet humanitarian needs. However, research and studies over the last decade show that it is an effective modality to meet needs of people engulfed in crisis only under appropriate condition and in the right context.

IPOs of 20 companies worth over Rs 5.90 billion on pipeline
8 hours ago