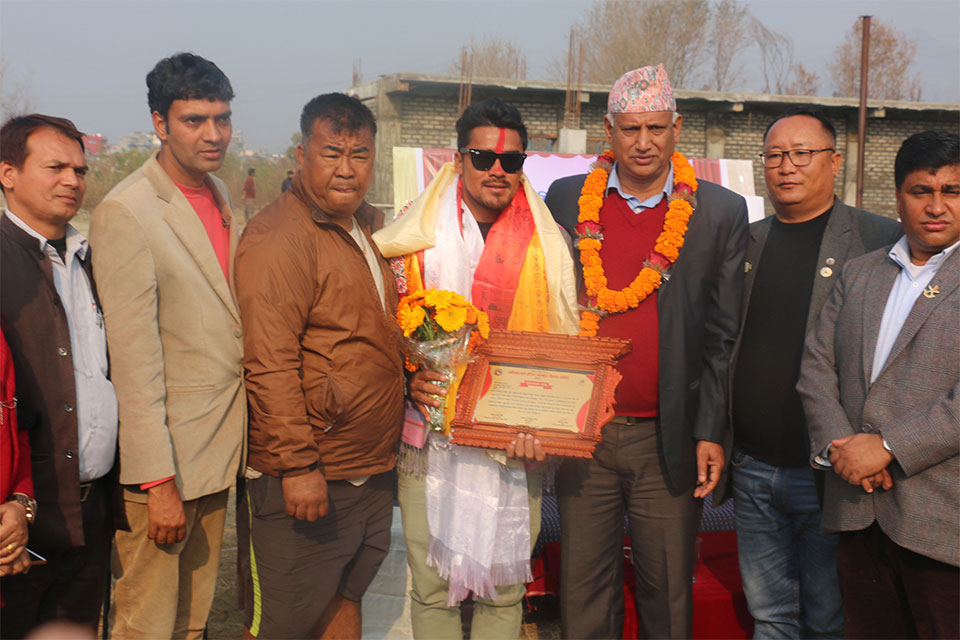 POKHARA, Feb 21: Minister for Industry, Forest, Tourism, Supplies and Environment of Province 4, Ram Sharan Basnet, has announced a cash reward of Rs 100,000 for Karan KC, the member in the National Cricket Team which recently returned home after being qualified for playing in the 2018 ICC World Cup Qualifier. The reward was announced on behalf of the Province government.

While honouring the player amidst a programme organised by the West-regional Sports Development Committee here today, the Minister said an emphasis would be laid on the development of sports in the Province policies and programmes and budget coming next month.

He further said the Pokhara Stadium would be upgraded to a structure of an international standard.
He took the time to call on the Nepali Cricket Squad including all rounder KC to gear up for the qualifying match scheduled to be held in Zimbabwe on coming March 4- 25, wishing for their successful journey ahead to play in 2019 World Cup.

Committee chair Khagarak Poudel insisted on the need of properly recognising Nepali players' contribution to their respective fields, despite limited infrastructure and facilities.

Receiving the honour, KC said he was pleased to receive the felicitation and pledged to leave no stone unturned in his attempts for making the country proud in the international arena.

On the occasion, he was also rewarded a cash prize of Rs 15,000 on behalf of the Madan Bhandari Sports Academy.

KATHMANDU, Oct 22: The Bir Ganeshman Singh National Tennis Championship is scheduled to be held from October 26 under the... Read More...