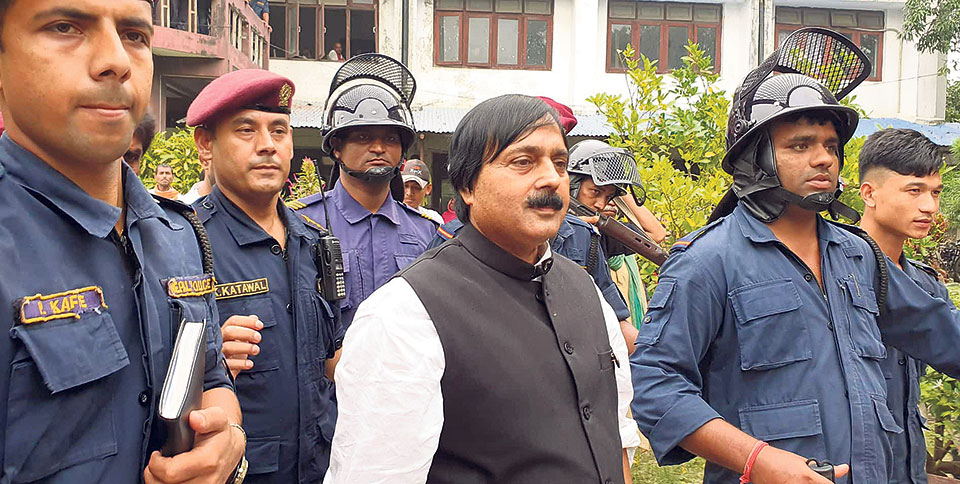 RAUTAHAT, Nov 4: District Attorney's Office at Rautahat has filed a case against suspended lawmaker Mohammad Aftab Alam on Monday for his alleged involvement in committing several murders in Rautahat district in April 2008.

The District Attorney's Office has sought life imprisonment for Alam and ten others under criminal code.

Earlier, District Police Office, Rautahat submitted the file against him on Friday after keeping him under custody for 20 days. He was arrested on October 13.

Alam, who is also a Nepali Congress lawmaker, has been accused of killing dozens of persons in a massive blast in Rautahat. The blast, which occurred at the cowshed of Alam’s relative when the victims were making bombs, had allegedly left 14 dead and eight injured. Alam has been accused of taking the blast-injured and the dead to a nearby brick kiln and throwing them in the furnace to destroy any evidence.

Later, it was learnt that all those killed were making bombs to create terror in the Constituent Assembly elections to secure Alam’s win.

As per the investigation by police, Alam had killed eight of the injured witnesses in a brick kiln. A team of police led by DSP Nabin Karki arrested Alam at Idris Gate in Rajapur Municipality-1, while he was on his way to attend a tea reception organized by Nepali Congress in district headquarters, Gaur.

The Supreme Court had ordered a proper investigation into the case and action as per the law on May 29, 2012.

Life imprisonment sought for Alam and ten others

My arrest is unjustified, claims NC leader Alam (with video)

RAUTAHAT, Oct 25: Mohammad Aftab Alam who is currently under police custody argued that his arrest in connection to an... Read More...