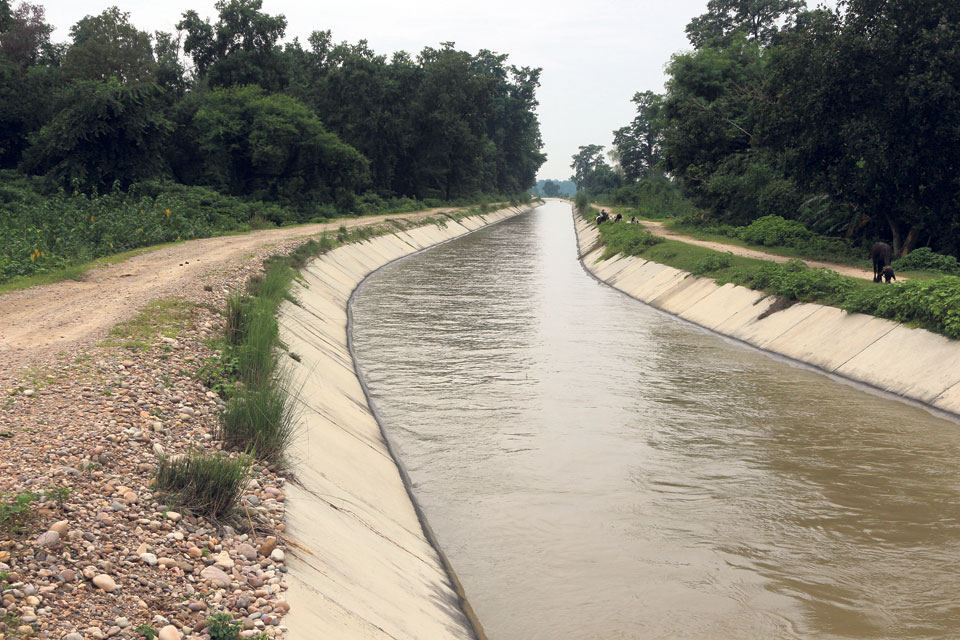 BARDIYA, Feb 5: Bheri Babai Diversion Multipurpose Project, which was started under the government’s vision to give farmers proper access to irrigation facilities, has expedited construction of canals of late. With the recent progress in works, the project has entered the final stage to take irrigation water to farmers’ fields.

The project had considerably lost momentum in the past few years after encountering problems with land acquisition process, budget deficiency, and political turmoil after earthquake.

After completion of the project, 40-cubic-meters of water will flow through the canals per second, into the irrigation fields in the region.

Kunjan Bhakta Shrestha, chief of Babai Irrigation Project, said: “The national pride project aims to upgrade the existing irrigation infrastructure and construct new ones to fulfil the demand and increase the productivity of land in the region.”

Twenty kilometers of the canal out of the total 42 kilometers, which aims to irrigate 15 thousand hectare land on the western side, is already complete and irrigation has started in traditionally existing canals and sub-canals through it. “The upgrading work of other canals is also picking up pace,” Shrestha said.

According to Shrestha, the project which had been allocated Rs 1.57 billion has achieved 48 percent progress in infrastructure building, spending about 47 percent of its total allocated budget.

The region in which the project has reached has seen a lot of market activity, especially in the realty sector. A local resident, Keshab Rana, said that the people from hilly region have started to migrate into the areas where the irrigation facility reaches.

According to Rana and other locals, the increasing land prices will further escalate with the completion of the project.

Speaking on the slow progress that the project has seen in the last 30 years, Shrestha said that it was due to financial problems that came up with the limited scope that the project was initially given.

“However, with the project gaining the status of a national pride project, there is not much problem with funds,” he said.

The delay in project is also attributed to low deployment of manpower. But the issue was also resolved when the project was termed a national pride project. Speaking on the stakeholder support, Shrestha also said that the project has been receiving all the help from the concerned ministries and departments of the government.

US Acting Assistant Secretary Trudeau in Kathmandu
12 minutes ago