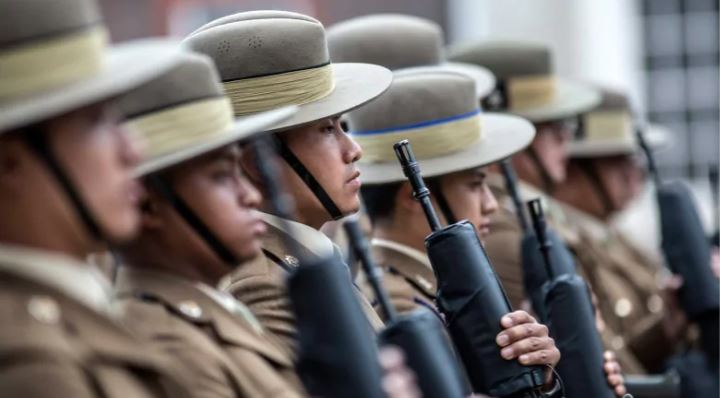 Serving Gurkha soldiers on parade in 2015 during a pageant to celebrate 200 years of Gurkha service to the British Crown in London. Canada has quietly settled a lawsuit filed by families of former Gurkhas and Indian contractors killed in 2016 while on their way to guard the Canadian embassy in Kabul. (Richard Pohle/Pool/Associated Press)

KATHMANDU, Oct 4: The federal government of Canada has quietly settled a lawsuit filed by survivors and family members in the wake of a suicide bombing outside the Canadian embassy in Kabul four years ago that killed 15 Nepali Gurkhas and Indian private security contractors, CBC News reported.

The former soldiers injured in the attack and the widows of the victims filed the $20 million court action two years ago. They launched their claim after the company hired by the federal government to protect Canadian diplomats in Afghanistan folded and disappeared, leaving its former employees and their families with partial compensation — or, in some cases, with no compensation at all.

CBC News chronicled their plight in a series of stories published in the aftermath of the 2016 bombing by the terrorist splinter group Islamic State-Khorasan Province.

Joe Fiorante, the Vancouver-based lawyer for the families, confirmed the settlement but would not disclose the terms, saying they're being kept confidential to protect the victims' families in Nepal.

"I can tell you the families were satisfied with the settlement and that they are confident the Government of Canada has recognized the sacrifice and service of those gentlemen who were protecting our embassy in Kabul at the time of the bombing," Fiorante told CBC News.

What the settlement didn't do, said Fiorante, is compel the federal government to change its policies to ensure it deals with reputable private security firms going forward, so that taxpayers are not left exposed to similar lawsuits.

Fiorante said the settlement didn't address the "gaps and weaknesses in the system of procurement with private contractors" — although it did bring those problems to light.

"The settlement itself does not contain any terms that require changes to be made in the future," he said. "That would be up to Global Affairs to address."

Initially, the families filed suit against both the federal government and Sabre International, the private security company that employed the slain soldiers as embassy guards. The families said Sabre promised them settlements of $300,000 US each — but Fiorante said he and his firm were not able to locate the company anywhere.

After the bombing, Sabre folded operations in both Iraq and Afghanistan, leaving the Canadian government scrambling to find another contractor to protect the embassy.

The guards died when the unarmoured bus which carried them daily from their quarters to the fortified embassy compound was attacked on a busy thoroughfare by a bomber who approached on foot.

At issue in the lawsuit was whether the company took enough precautions — and whether the federal government properly supervised the contractor to ensure it lived up to its health and safety obligations.

A CBC News investigation following the bombing revealed that the company had a long track record of questionable conduct that came under scrutiny by U.S. lawmakers. One Danish researcher alleged that Sabre had recruited child soldiers in Africa for one of its contracts in Iraq.

The settlement means questions about federal accountability have been pushed aside for now. Fiorante said those questions remain important.

"Certainly, there has to be enhanced due diligence in terms of screening private security contractors, especially their past record," he said.

Fiorante said that, going forward, contractors working for the Canadian government in conflict zones "need to be better vetted and there needs to be safeguards in place for workers in terms of workers' compensation insurance or similar insurance."

A spokesperson for Global Affairs Canada was non-committal when asked whether the federal government would introduce a tougher screening system and ensure better protection for contract staff in war zones.

"Officials at Global Affairs Canada continuously review security measures at missions abroad, including the Canadian Embassy in Kabul, through leading edge security enhancements and constant upgrades, in order to do the utmost to avoid a recurrence of this tragic incident," said spokesperson John Babcock in an email response.

While Babcock confirmed a settlement had been reached, he refused to discuss its terms.

The Canadian staff at the embassy took the loss of life very hard and erected a monument to the dead and wounded within the fortified mission compound in Kabul, Babcock said, adding that Canadian, Afghan, Nepalese and Indian officials have discussed concerns relating to the embassy attack since 2016.

KABUL, Afghanistan, Aug 19: The suicide bomber stood in the middle of the dancing, clapping crowd as hundreds of Afghan children... Read More...

KATHMANDU, Feb 14: Nepal has received a 195 –run target from Canada at their final match at the ICC World... Read More...