Can the young French squad prevail under Didier Deschamps? 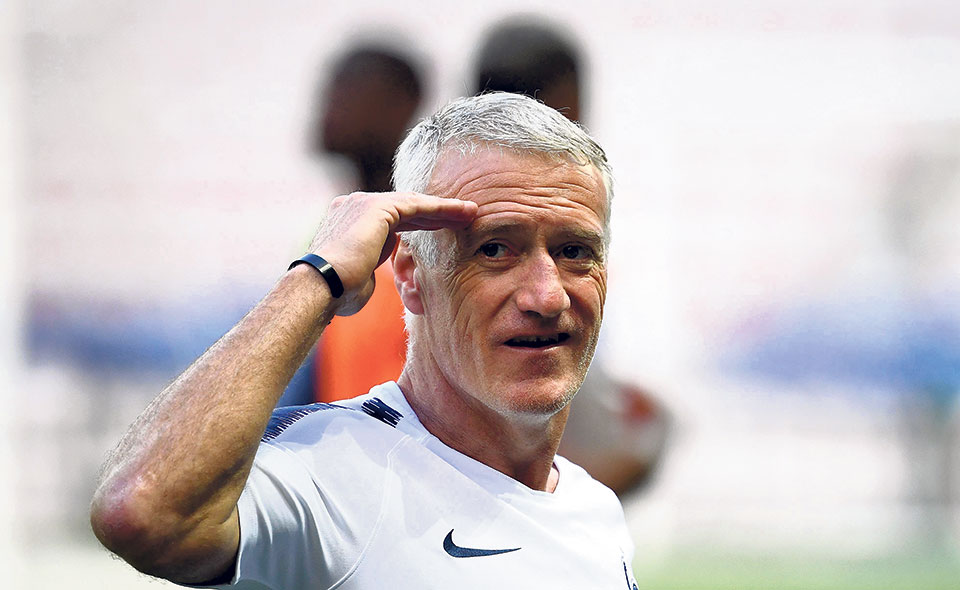 KATHMANDU, June 2: The Group C of the 2018 FIFA World Cup which starts from June 14 and concludes on July 15, will have more exciting ingredients in both attacking and defensive prospects as France, Denmark, Peru and Australia go head-to-head.

It will be of no surprise if France emerges as the winner of the third group of the finals, but Denmark, Peru, and Australia’s football are no less entertaining than the European giants.

France
Introduction
Having failed to advance beyond the quarterfinals in the consecutive three occasions, France’s talented and versatile squad under head coach Didier Deschamps has been termed as raw, young and still with a point to prove in the coming finals.

The 2014 World Cup saw a new revamped French team, but failing to get past the quarterfinals was regarded as a team with a lot to prove.

The inconsistency certainly bothers the team, but with new and young players, who have proved themselves in Europe, can surely help France get one better in the upcoming finals.

Young attacking force
Monaco’s 22-year-old Thomas Lemar is one of the few versatile players in the world who can play in both the wings, in the midfield and in a free role and will be helped by 20-year-old right winger Ousmane Dembele and 19-year-old Kylian Mbappe, who is equally good in both the wings.

The only attacker above the age of 27 in the 23-man squad for France is Olivier Giroud (31), who will most likely be played as a substitute, but can be a lone forward too.

Only 25-year-old Raphael Varane and 32-year-old Adil Rami are going to make their second appearance in the final after both of them were selected for Brazil in 2014 as well.

‘Where are the fullbacks?’
In a strange squad named by Deschamps, only two fullbacks made it to the squad: right back Djibril Sidibe and left back Benjamin Mendy. There are no other natural fullbacks to support Mendy, who made his return in April, and Sidibe.

Selecting six center backs, and only taking two fullbacks to the finals will be really disastrous with fatigue and injuries, if happens.

Deschamps’ managerial failures
Deschamps was appointed the head coach of France on a two-year contract as Laurent Blanc left the post after the Euro 2012.

Under him, France reached the quarterfinals by defeating Nigeria 2-0 in the round of 16, but lost to Germany 1-0 in the last eight.

Then, France was expected to win the Euro 2016 under him with some world class performances in the earlier stages of the tournament, but lost to Portugal in the final which led to yet another trophyless campaign for Deschamps.

Denmark
Introduction
As the top position of the group would quite probably be taken by France, but the second position, which can see Denmark reaching the round of 16 after 2002, is surely up for grabs for the three teams. Having failed to qualify for the 2006 and 2014 finals and, and getting knocked out of the group stages of the 2010 World Cup, Denmark will surely be wanting to utilize this opportunity and get better of Peru and Australia when it faces them.

It came second in the Group E of the UEFA qualifiers finishing behind Poland. Denmark defeated the Republic of Ireland in the two-legged playoffs with a 5-1 aggregate score and all the six goals coming in the second leg in Dublin.

Goalkeepers and defense
Head coach Age Hareide is yet to finalize his 23-man squad, but he might as well be fielding Leicester 31-year old goalkeeper Kasper Schmeichel has become one of the key members in the teams in the recent years.

He will be supported by Frederik Ronnow and Jonas Lossol.

Captain Simon Kjaer and Andreas Bjelland will be leading the center of the defense, but Chelsea youngster Andreas Christensen, who has grown this season under Antonio Conte might also be tested and might also start for the Danes. Jannik Vestergaard and Mathias Jorgensen could also be rotated in the center back roles.

Peter Ankersen and Jens Stryger Larsen are the potential candidates for the right and the left flanks of the defense respectively. Henrik Dalsgaard is the other right back in the team, while Jonas Knudsen is the left back who could be rotated.

Midfield and attack
Denmark will most probably play in a 4-3-3 system with William Kvist as the defensive midfielder, alongside Thomas Delany.

Christian Eriksen will play as an attacking midfielder above the two midfielders.

Lasse Schone could replace Kvist in the defensive midfield role, while he could be supported by central midfielder Michael Krohn-Dehli, Pierre-Emile Hojbery. There is a talented attacking midfielder in Viktor Fischer who could be a backup for Eriksen.

Daniel Wass is also a candidate for the right or the left midfield roles. Right winger Pione Sisto and left winger Yussuf Poulsen might as well lead the attack, but Poulsen can be used in an advanced role as well.
The other forwards in the list are Nicolai Jorgensen, Andreas Cornelius, Martin Braithwaite and Kasper Dolbery.

Peru
Introduction
Peru is making its World Cup return after 36 years of absence in the finals when it last made its appearance in 1982.

Having finished fifth in the CONMEBOL qualifiers and having to play the playoffs against New Zealand, Peru made it to the finals with a 2-0 aggregate win in the two-legged contest.

Goalkeepers and defense
Peru has four most probable candidates while picking the goalkeepers with the best option being Pedro Gallesse.

He will be supported by Carlos Caceda and Jose Carvallo, but Leao Barton could also be considered.

It has three leading options in the center back positions up for grabs for Alberto Rodriguez, Miguel Araujo, and Christian Ramos, but the other player who could make it to the final squad might be Luis Abram.

Likewise, Aldo Corzo and Luis Advincule will be heavily rotated for the right back position, while Miguel Trauco and Nilson Loyala will fight for the left back role.

Midfield and attack
Anderson Santamaria, who is a natural central defender is mostly played as a defensive midfielder for the team, while he is supported by two other holding midfielders Pedro Aquino and Wilder Cartagena, but the latter could miss out of the final squad.

In the central midfield role are Renato Tapia and Yoshimar Yotun, while Cristian Cueva, Sergio Pena, Yordy Regna and Paolo Hurtado are the attacking midfielders.

There is only one natural left winger in the team in Edison Flores, while Jefferson Farfan, Andre Carillo, Jose Manzaneda and Andy Polo are the right wingers.

They will feed the ball to captain Paolo Guerrero, who was cleared of the doping ban by FIFA on Thursday. He will get backups from Ivan Bulos and Raul Ruidiaz.

Australia
Introduction
Australia has qualified to its fifth World Cup finals and fourth back to back with the Russia World Cup just on the horizon.

After finishing third behind Japan and Saudi Arabia in Group B of the AFC qualifiers, Australia played a two-legged playoff matches against the third placed team of Group A Syria, who it beat 2-3 on aggregate.

Goalkeepers and defense
Mathew Ryan is the top choice for the man to be between the sticks, with Brad Jones and Danny Vukovic to be his backups chosen by Bert van Marwijk.

Australia mostly plays in a 3-4-3 formation with three center backs from Trent Sainsbury, Ryan McGowan, Milos Degenek and Mathew Spiranovic, while they will also have Bailey Wright and Brad Smith in central defender roles, with Smith capable of also playing as a wing back.

Mathew Leckie will play in the right wing back or the right winger position, while he will be supported by either Smith or Alex Gersbach.

The left side of that position can also see Aziz Behich and Jason Davidson.

Midfield and attack
Mile Jedinak is the leading candidate for the defensive midfield role, while he will be supported by center midfielder Aaron Mooy.

Mark Milligan, who also plays as a center back, with Jackson Irvine can play in that role, and will be rotated as well.

Tom Rogic will most likely play in the attacking midfielder role with his backup being James Troisi, while Robbie Kruse and Tomy Oar in the left wing position, and Leckie with Awer Mabil will be deployed on the right.

The forwards are Toni Juric, Tim Cahill and Nathan Burns. Jamie Maclaren will lead the attack, while Rogic can also play as a forward.

LONDON, Sept 26: Blame it on jet lag or maybe a precocious knowledge that his great-grandmother is Canada’s head of state... Read More...

Bishwa Prakash's question to Oli: When will you get rid of 'Congress phobia'?
33 minutes ago