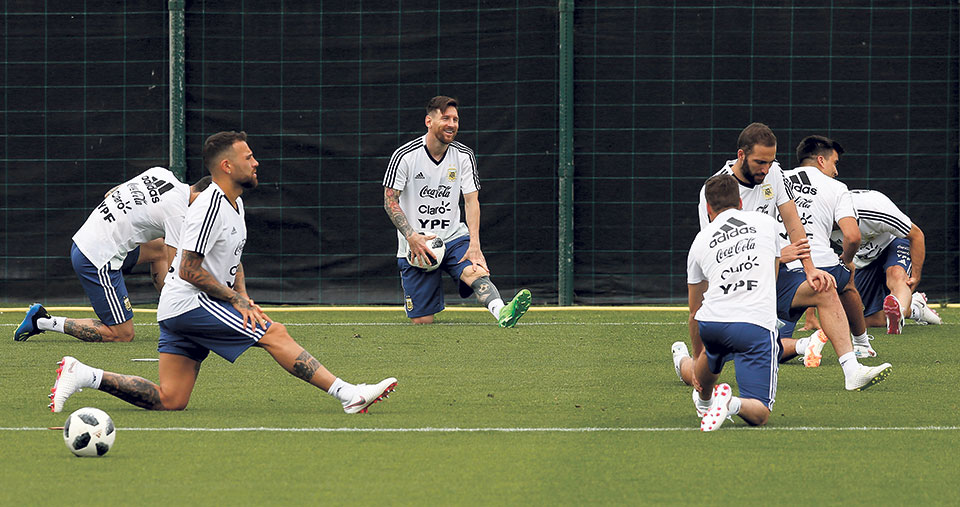 Argentina’s Lionel Messi (center) takes part in a training session with his teammates at the Sports Center FC Barcelona Joan Gamper in Spain on Saturday. Ap/Rss

KATHMANDU, June 4: Argentina starts 2018 FIFA World Cup which is set to kick off from June 14 to July 15, to get one better of the last finals when it lost to Germany 1-0 in the final in 2014. The 'Group of Death' of has Croatia, Iceland, and Nigeria also fighting for their bids.

Lionel Messi is yet to add the football's most coveted trophy in the big list of silverware won in his career separating him from other greats like Pele and Maradona.

Argentina
Introduction
The South American powerhouse of football had not reached the final since 1990 before that, and many expected it could win the World Cup with Messi leading the side.

But, further disappointments started to come, and Argentina lost back to back Copa Americas in 2015 and 2016 to the same

opponent, Chile, who was coached by Jorge Sampaoli in 2015, who is the current coach of Argentina.

Argentina qualified to the finals finishing third in the CONMEBOL qualifying section behind Brazil and Uruguay, winning the last match of the qualifiers with a hattrick from Messi.

Main problem
After Argentina fired Edgardo Bauza mid-way through the qualification campaign, Sampaoli was expected to build a team who could play without Messi, not just around him.

Argentina played eight games in the qualifiers without him and won just one, it lost two matches, drew four and conceded two more goals than it scored. Whereas, with Messi, it won six out of 10 games, lost two and drew three, and also scored 13 and conceded three.

Goalkeepers and defense
Injured Sergio Romero prompted Argentina to call up Nahuel Guzman. However, Franco Armani might still start most of the games for Argentina, with the experienced shot-stopper Willy Caballero as backup.

Argentina will field Federico Fazio (31) and Nicolas Otamendi (30) in the center back roles, with Marcos Rojo (28) to assist them when needed.

Gabriel Mercado (31) and Nicolas Tagliafico (25) are the potential starters in the right and the left flanks. They will be supported by Cristian Ansaldi (31) and Marcos Acuna (26).

Style of play and talented midfield
Argentina has a midfield with a variety of options to choose. Sampaoli hinted at playing a 2-3-3-2 which is similar to a 4-3-3 style of play, which Argentina prefers in the finals.

The midfield will be formed with Javier Mascherano in the middle of the park with two full backs assisting him in either flank. Ever Banega and Lucas Biglia are the other options in the defensive midfield role for Argentina.

Up front are Manuel Lanzini, naturally a central midfielder, but normally deployed as an attacking midfielder, with Giovani Lo Celso, and Angel di Maria on the right. Eduardo Salvio and Christian Pavon are handy backups for the wing positions along with Maximiliano Meza.

Big attacking names
Messi will lead the line along with an extra forward which most likely will be Sergio Aguero. He might get backups and will be heavily rotated with Gonzalo Higuain. The other player in the lineup will be Paulo Dybala.

Croatia
Introduction
It's only the fifth appearance for Croatia in the World Cup finals, with the best finish coming in 1998 when it became third.

Goalkeepers and defense
Danijel Subasic is the top contender for the role of goalkeeper for Croatia, while he will be helped by Lovre Kalinic and Dominic Livakovic.

Domagoj Vida and Dejan Lovren are the probable starters for the center back positions, while they'll get backups from Matej Mitrovic and Vedran Corluka, who can also play as a right back.
Sime Vrsaljko is the best man for the right back position, while Ivan Strinic and Josip Pivarij are the left backs.

Creative and versatile midfield
Croatia has one of the best midfield lineups of the World Cup, if not the best, with many players playing from top European clubs.

There are six players who can be deployed from place to place in the midfield. Milan Badelj is the main man for the defensive midfield role, while he will be backed up by Mateo Kovacic. Ivan Rakitic and Luka Modric are the potential center midfielders, while Marcelo Brozovic and Filip Bradaric are reliable backups.

Forwards
Croatia is yet to name its final 23-man squad and with the 24 players set to fall in that squad, there are six potential forwards who could go to Russia.

Mario Mandzukic is the best options for the advanced role along with Nikola Kalinic.
Ivan Perisic, Ante Rebic, and Marko Pjaca are the wingers in the team, while Andrej Kramaric usually plays as a second striker.

Iceland
Introduction
The country with just over a 300,000 population, Iceland stunned everyone in the Euro 2016 when it defeated England in the round of 16.

This time Iceland will face the likes of Lionel Messi, and the 'thunderclaps' will surely be on their mind if they manage to do something special.

The hot underdogs are on their way to Russia, and more of the same from the Euros can be expected in the World Cup.

Goalkeepers and defense
Hannes Halldorsson is the main man to be between the sticks,  while he will be supported by Frederik Schram and Runar Alex  Runarsson.

Two experienced defenders Ragnar Sigurdsson and Kari Arnasson will be the center backs for Iceland and they will need to be at their very best when it takes on Argentina in the first group game.

Midfield
Bearded captain Aron Gunnarsson will be the pivotal man in the heart of the Iceland midfield, while he will be assisted by Gylfi Sigurdsson and Johann Berg Gudmundsson.

Attack
Sigurdsson has been constantly used as a deep-lying forward for Iceland and is also a playmaker for his team. It also has three strikers who could fit into the system in Bjorn Bergmann Sigurdarson, Alfred Finnbogason, and Jon Bodvarsson.

Nigeria
Introduction
All the three others teams would want to avoid playing Nigeria on a break, because if the African country does counter-attack, then it’s all problems moving ahead.

Topping the group ahead of Zambia, Cameroon, and Algeria, Nigeria advanced into the finals with the tag of one of the best African teams.

Goalkeepers and defense
The 23-man squad is yet to be finalized by Nigeria, but it'll be of a very big surprise if Ikechukwu Ezenwa does not start for the team and he will be given the backups by Daniel Akpeyi and Francis Uzoho.

Leon Balogun and William Troost-Ekong are the main men to play at the center back positions, with right back Abdullahi Shehu and left back Elderson Echiejile on the flanks.

Midfield: The key and forward
The two defensive midfielders John Obi Mikel and Wilfred Ndidi will be vital for Nigeria. Mikel will have to link the attack with his passing with the defense and Ndidi will have to shield the inexperienced backline. Ogenyi Onazi is the other player to do the job alongside Ndidi.

Chelsea's Victor Moses and Arsenal's Alex Iwobi will do the job on breaking the defensive line from the flanks, while they will be supported by Moses Simon.

Odion Ighalo and Kelechi Iheanacho are the forwards and will be supported by Ahmed Musa.