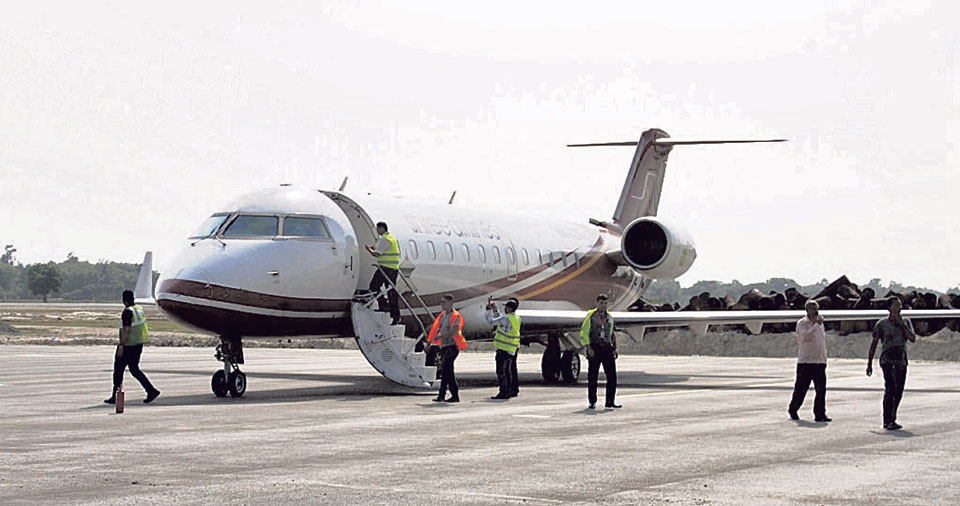 Locals elated to see plane at the airfield after a decade

RAJBIRAJ, May 24: The Civil Aviation Authority of Nepal (CAAN) has confirmed that the test flight conducted in Rajbiraj Airport on Wednesday was successful. However the locals will have to wait for a few more weeks for regular flights.

A CRJ200 jet engine of Shree Airlines with the capacity of carrying 50 passengers successfully completed the test flight at around 3:45 pm on Wednesday. The test flight was conducted with the participation of Safety Department's captain DR Niraula and pilots Prajwal Adhikari and Rajesh Shrestha. According to pilot Shrestha, there is no problem at the airport for operating regular flights. Established in 1959 AD, Rajbiraj airport is one of the oldest airports of the country. But the airfield could not be used for regular flights since 1996 due to various technical obstructions.

After much pressure from the locals, an airplane had landed in the airfield on November 18, 2007. However, the service was halted again after a few weeks.

A huge crowd had gathered outside the airport to see the test flight. Ramekbal Mehata, project chief of Rajbiraj Airport however informed that there are some technical barriers which need to be fixed for conducting regular flights. He further informed that the technical team of CAAN has already reached the airport along with required tools and equipment for starting regular flight service.

The airfield which is 1,500 meters long and 30 meters wide has been constructed at the cost of around Rs 303 million. The runway, taxiway and apron are ready but there still is some work remaining in the tower and the terminal. It will take some three to four weeks for the operation of regular flights, according to project chief Mehata. As of now, preparations are underway to operate flights on Rajbiraj- Kathmadu route only.

"Shree Airlines has already agreed for the route and some other airlines too have shown interest but we are yet to held discussions with them," said Mehata. As the brick kilns and trees near the airport might pose some problem, CAAN is working to resolve the problem. This airport was inaugurated by the then Minister for Industry Ganeshman Singh in 1959.