Buildings under-construction for offices that will cease to exist soon 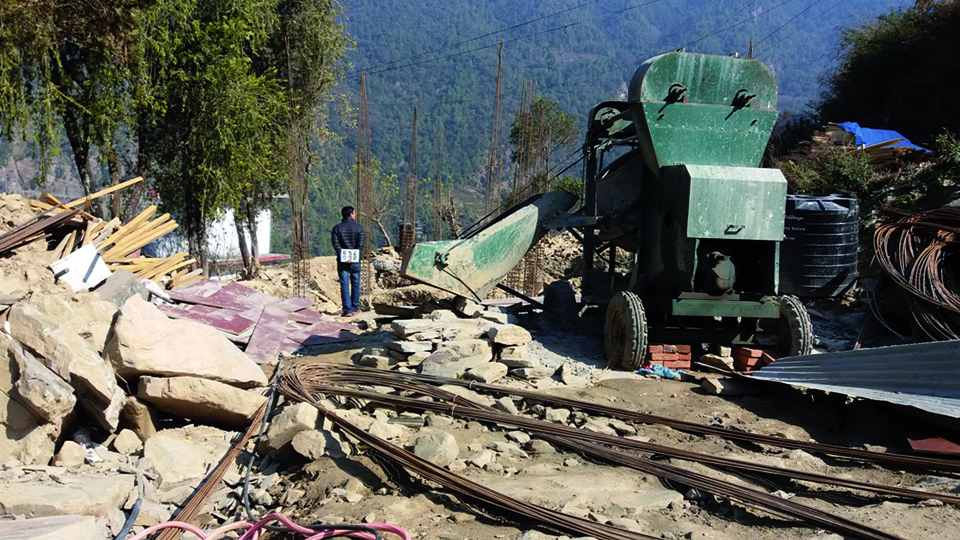 A new building under construction for District Agriculture Office, Rasuwa in this recent photo. Himnath Devkota/Republica

RASUWA, Jan 30: With the implementation of federal set up, most of the government offices at the district headquarters will cease to exist starting 11 April. Surprisingly, many such offices are adding new buildings in their premises.

Post office, Agriculture office and the office of Irrigation and Animal Husbandry at the district headquarters have sped up the construction work. Land and Revenue, District Education along with Small and textile Industries had constructed new building last year. The newly constructed and under construction buildings are not going to come into use within the next two months before these offices cease to exist.

According to District Education Officer Homnath Neupane, the office buildings are going to be handed over to the local level government.  However, a formal letter with specific directives from the center is yet to come. “Yes, the office or the buildings will be handed over to the local level government, but we have not got any letter regarding this,” he said. “We don't know how these buildings will be used. Such infrastructures will be required at the center but here at the ward offices, we don't know what they will be used for.”

Goma Wagle, Development Officer with the Office of Woman and Children stated that the office 'will hand over the buildings to the desired body as and when such circulation comes to us.' “We have not received any circulation regarding their handover,” she said.

There are 32 government offices at the district headquarters. Most of them will cease to exist from April 11. Some of these offices are Health, Drinking Water, Irrigation, Land and Revenue, Land Conservation and Herbs, among others.

Dawasidar Waiba, chairperson of Gosaikunda Rural Municipality-6, all the buildings would come in use if Rasuwa had been the center of the new federal state. However, since it is not the center, the buildings will be hardly used. “Considering the federal setup, I don't think those new buildings will be used, as they are supposed to be. But still, they are being constructed as the budget for them has been released,” he said.

He informed that a budget of Rs 13 millions has been released for constructing buildings for offices that would cease to exist in the next two months.

Even though many of the old government offices would cease to exist in two months time and the local level would be governing it, a sheer lack of planning is seen at the local level. Local level officers are clueless about how they are going to use existing buildings or the new buildings that are presently under construction in the coming days.

Sources claimed that the reason behind the hasty construction of the buildings is motivated by intentions to embezzle the funds. Requesting anonymity, an officer with the office of Woman and Children stated that construction of the building is expedited for the same reason. “If the budget is used, officials can get commission from the contractors,” the official claimed without providing any proof to back it.

Meanwhile, local level representatives lamented the lack of clarity as well as lack of idea about the issue. They said that though there is clarity over the jurisdiction of the local level, but there are many legal complexities.

“If you talk of local level units, there is a kind of confusion. There are many practical problems with which we are struggling,” said a ward member. He added that the local level representatives are having difficulties to operate in lack of infrastructures. At some places, there are no rooms for offices and in some other places, something else is lacking.

“The responsibility is huge. Local government oversees many things, which were handled by the center so far. But, we are not well prepared to take over all the responsibilities. We are moving very cautiously,” he said, requesting anonymity.

Waiba stated that it is going to take time for the local bodies to learn things. “We are going federal. It is a huge undertaking. We are taking baby steps now and should have patience to move ahead in the right direction,” he said.

Most govt buildings in Paanchthar built against criteria

PAANCHTHAR, Jan 24: Several government buildings in Panchthar have been found built spending large amount of money against the standards and... Read More...

EC opens offices of chief returning officers in all 75 districts

KATHMANDU, April 17: As part of final preparations for the May 14 elections, the Election Commission (EC) on Sunday set up... Read More...