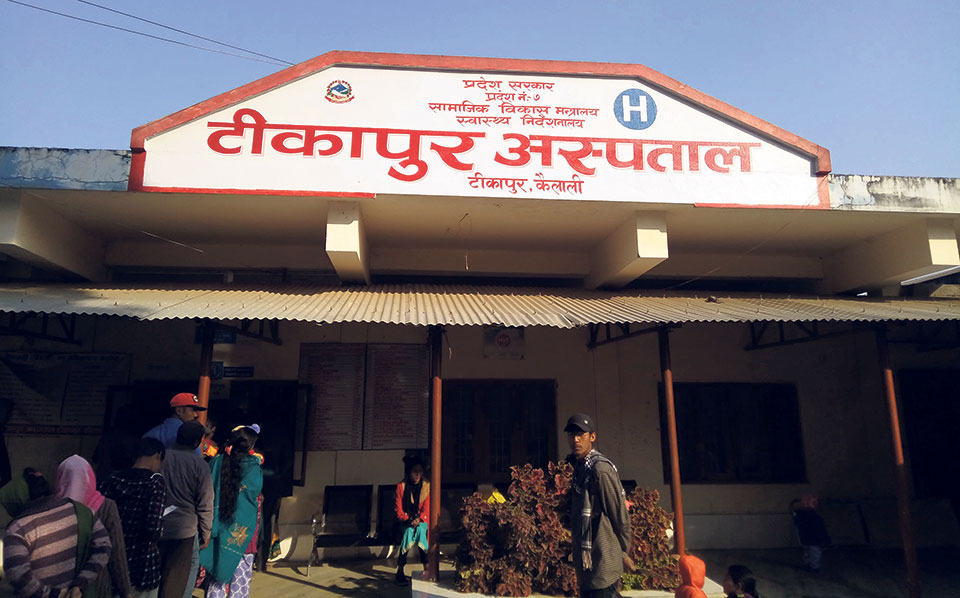 TIKAPUR, Dec 25: Safe Motherhood is one of the government’s topmost priorities. For this, maternity units have been opened at several health centers across the country where the service is not just free but women are even provided with allowance after delivery. Despite being a part of it, the Tikapur Hospital is not able to provide all the facilities that the program promises.

“We are no more in a position to provide services for free. The authorities concerned have not released enough budget to support the safe motherhood project the hospital,” said Medical Superintendent of the hospital, Dr Narendra Kumar Khanal.

According to Khanal, only Rs 800,000 was allocated for safe motherhood this fiscal year which exhausted early on.

“We were providing the services to expecting mothers while we had the budget. But since that exhausted we have been not able to do so. And then there came a time when we were not able to provide the services for free, let alone providing the allowance,” he said.
Khanal said the hospital has to buy the delivery kits and it does not have a budget of its own to purchase them. As such, he said that the hospital is unable to support the safe motherhood project.

“We can provide our services for free. But we cannot buy materials like syringes, medicenes, bandages etc that we require during deliveries.

This costs around Rs 1,500 for each delivery. As the hospital does not have the budget to buy them, we have been asking the concerned family to pay for it. But they do not understand,” he said.

The issue is indeed complex. While mothers clearly know that they are entitled to get maternity allowance, the need to pay back to the hospital has been just agitating them. When asked to pay the amount, not only they refuse to do so, they even protest.

“They have protested. They have even charged me of being corrupt. They say the entire hospital is corrupt. It is a very difficult situation,” Khanal reported. “We have no solution in hand.”

“Established working processes have been dismantled by the implementation of the federal structure. A new structure and workflow are yet to be established. Because of this, there is a lot of confusion. It is still unclear if this hospital is under the local government or the central or the provincial government,” said Khanal.

“This year, they have doubled the allowance, but this has not become functional,” Khanal said. “So far, we are somehow managing to give service to the mothers, but if the budget is not released soon, we won’t be able to do so,” he added.

The hospital has been in touch with the provincial and central level authorities for resolving the issue. “If they pay attention to our concerns,  it is not a very big deal to resolve. We have contacted senior officials at the center and expect them to address the issues very soon,” he said.

Social Development Ministry of the province recently provided Rs 2 million to the hospital to buy tools. Similarly, it has been receiving budget under other heads.

“We are spending the budget we recieved for one purpose to another purpose. But that is wrong. We cannot do that for long,” said Khanal. “We have not touched the budget allocated to the hospital for purchasing ICU equipment. But we have slightly used the budget that came under other heads for maternity services,” he added.

The hospital was first established as a health post in 1978. In 1993, it was upgraded to a primary health post with a capacity of three beds. A few years later, the then Tikapur Development Committee took initiatives to upgrade it 12 bedded health center. A decade later, the government added a few more facilities and it was registered as a hospital. In 2015, it turned to 51-bedded hospital. The hospital is visited by people from remote villages and towns of Kailali, Bardiya and other western districts.

Govt all powerful but performance not commensurate

KATHMANDU, May 28: Economic prosperity and progress were the buzzwords since the current government came into office in February last year.... Read More...

Approve working procedure for programs before including it in budget, house panel tells govt

KATHMANDU, March 19: The Finance Committee of parliament has instructed the government to bring budget from the upcoming fiscal year only... Read More...