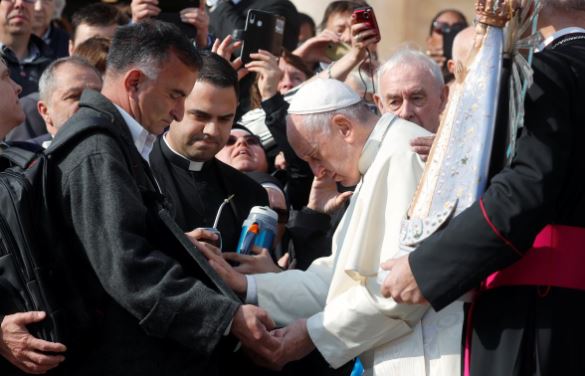 Pope Francis touches a gravestone for Argentinian soldier as he presides over the exchange of two statues by British and Argentinian military vicars that are symbolic of the 1982 Falklands War on the Falkland Islands, which Argentina refers to as the Islas Malvinas, at the Vatican, October 30, 2019. REUTERS/Remo Casilli

VATICAN CITY, Oct 30: Thirty-seven years after the Falklands war, a tiny statue of the Madonna taken at the end of the conflict and held in Britain ever since is going home to Argentina in a gesture of reconciliation blessed by Pope Francis.

Argentine soldiers took the statue of Our Lady of Lujan, one of their country’s most revered icons, with them for divine protection when they invaded the islands, which Buenos Aires calls the Malvinas, on April 2, 1982.

That statue was a copy of the 1630 original, which is in the cathedral of Lujan.

After the Argentine rout at the end of a two-month conflict, a Catholic Church official responsible for the Falklands gave it to the Catholic military chaplain who had arrived with the British forces.

The statue was then taken to Britain and found a home in the Catholic Military Cathedral of St. Michael and St. George in Aldershot, in southern England.

The statue that was in Britain will return to Argentina and a replica will go to the British cathedral in Aldershot.

Olivera had asked for its return because people in the area of Argentina where it was venerated before the war wanted to be able to pray before it again.

“I immediately realised what a good opportunity it was, not only to return the statue, but also to demonstrate a united faith across two countries that have experienced political division,” Mason said.

Some 255 British troops and about 650 Argentine soldiers were killed in the two-month conflict.

During the handover in St. Peter’s Square at the end his weekly general audience, Francis also blessed and kissed a gravestone for the tomb of an unknown Argentine soldier.

Argentina still claims the windswept South Atlantic archipelago, which has a population of about 4,000.

COVID-19 is a great equalizer: Madonna from her bathtub

In a bizarre video shot from her rose petal filled bathtub, pop star Madonna has called the coronavirus pandemic "a... Read More...

LONDON, Sept 21: The Embassy of Nepal in Britain is gearing up to organize a high level visit from Britain... Read More...