Bringing back the basics

A common belief among most Nepalis is that when young people leave the country to pursue their dreams, most of them won’t come back to Nepal. But today’s generation is proving this to be a misconception. Not only are many Nepali youths returning to Nepal after completing their studies and actually working here, they are also starting new companies on their own and bringing about innovative ideas that have not been implemented in our country before.

Kāma, a Nepali lifestyle brand founded by cousins Raisha Shrestha, Adhishree Shrestha, Aayush Chandra Shrestha, and Shailya Pradhan, is one such company. All four founders are currently either studying or working abroad (in different countries) but they have somehow managed to run their brand. Although the brand officially started selling its products since mid April this year, the four of them have been working on Kāma for more than a year now.

The name for the brand comes from the Sanskrit term ‘Kamasutra’ that means desirable and loved. The founders mention that they went along with the name Kāma for their brand because they wanted their clothing to make people feel like they are beautiful and desirable.

Getting the idea
“The initial motivation behind the brand was a want and need to prove to our families and friends that we could amount to something and create things on our own. Usually, the routine of most Nepali youths is completing high school, studying Bachelor’s and Master’s abroad, and spending the rest of their lives at a 9 to 5 job. We wanted to break free from that cycle and prove that you can earn your living without following the orthodox life rules,” says Aayush explaining why he and his cousins launched the brand.

That is just one part of the initial motivation behind the launch of Kāma. The other is the founders’ mutual dissatisfaction with the kind of denim clothing sold in Nepal. “Finding good denims and jeans in Nepal is really hard. The ones that look good or the branded ones are very expensive. And the only option you have is between them or buying the cheaply made Chinese ones,” says Adhishree. So when, one day, Raisha showed up to hang out with her cousins wearing good quality jeans in a very flattering design, all of them questioned her about the brand and inquired where she had bought them.

“They were actually just these basic pair of jeans that I had custom made by a local tailor. I just gave him a design and he made them to my measurements. Coincidently, just a couple days earlier I had mentioned wanting to do something entrepreneurial to my cousins and, since they liked it so much, we came up with the idea of launching a brand in Nepal that would sell good quality denim at affordable prices,” reveals Raisha about the launch of the brand.

Working process
Since all the founders have other things to focus on too (their jobs and their education) and live in different parts of the world, Raisha claims that it’s kind of hard to manage Kāma. She adds, “If there’s one thing we all agree upon it’s that you never get anywhere in life without hustling. Yes, we are all extremely busy but when it comes to discussing things about Kāma, we drop everything and focus on it. Since we’ve already started this brand, we want to see it grow and develop properly.”

Aayush claims that their working mechanism is pretty straightforward. It begins with the four of them discussing what article of clothing to manufacture next alongside its style, fabric, color, and sizes. They also use a joint Pinterest board where they pin up any clothing article they like. Before they move on to anything else, they discuss these things with their tailor to confirm if what they have envisioned is possible to make and take his suggestions on minor alterations too.

They then move on to buying the fabrics and other smaller items needed for the production of their products like buttons, threads, and other similar things. Their tailor makes a sample piece and the founders inspect it for any imperfections before the mass production process begins. The final touch ups on their products is the Kāma embroidery and the Jamarko manufactured tags made out of recycled paper that all of the products flaunt. The products are delivered to customers through the online delivery service, Aayo Express, in recycled paper bags made by Jamarko.

Behind Basanta
Even though the initial idea for Kāma was to produce jeans, the founders quickly realized that jeans production is a lot harder than they thought it would be. There are a lot of measurements you have to get correct to create pants that fit well including the overall length, round thigh, and waist measurements. Although the four of them experimented with a bunch of different styles and measurements, they could not create the perfect jeans they had envisioned among themselves.

Instead, they decided to stick with simpler items for their first collection. Their debut collection ‘Basanta’, included a number of basic denim jackets and denim and corduroy skirts. “We always knew we wanted our brand to stick to creating basics that are simple, affordable, comfortable, and durable. All the items included in ‘Basanta’ were created with that concept in mind.

On days you don’t know what to wear but still want to look put together, just pick something from Basanta. “All of them are basics so they pair up with literally any other clothing from your wardrobe,” claims Shailya adding that the reason for including corduroy alongside denim for ‘Basanta’ is because it’s a very trendy fabric right now and it also fits into the whole simple, durable, and comfortable theme that they have in mind.

Adhishree reveals that the Kāma team is gearing up for their second collection that is themed under autumn. She mentions that the products are currently mid-production and this time they have also included jeans and menswear and some of the items are actually inspired by suggestions from their customers. Additionally, she also claims that the whole working process was a lot easier this time round (when compared to the production of ‘Basanta’) because of everything they have learnt while working on their previous collection.
They are also working on opening up a physical store and warehouse for the brand. “We already have the space for it but we’re still working on the furniture and the overall interior for it. We use it as a warehouse as of now and customers who really want to try on the products before buying them come to the warehouse for it,” concludes Adhishree. 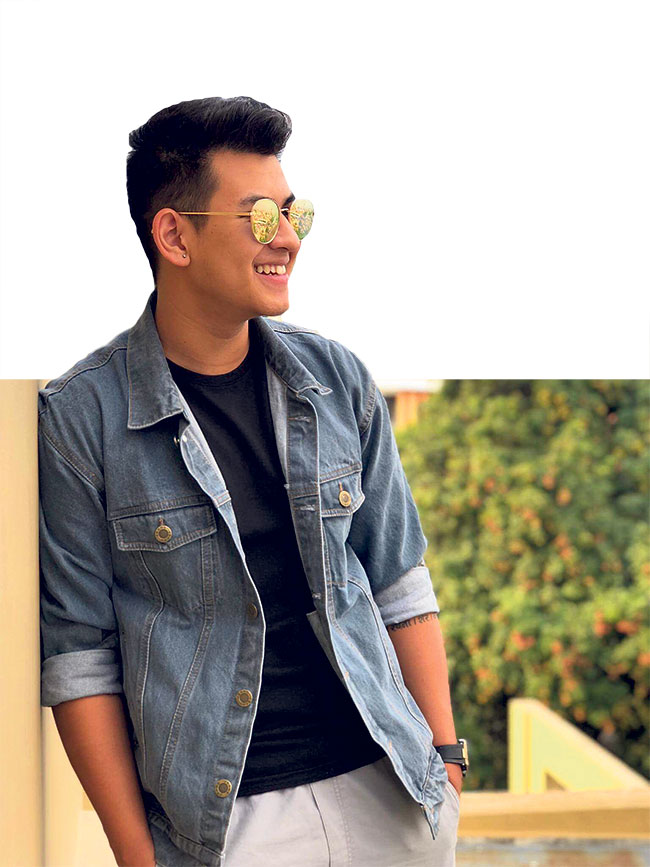 Primarily, NotYourBasic is actually your basic denim jacket. The modification that makes it not so basic is the fact that the buyer actually has the option to customize it to suit his/her style. Kāma offer patterned cloth panels and patches that you can stick to or sew onto the jacket to give it your own spin. Aayush claims that while Nepali customers mostly prefer sticking patches to their jackets, those living abroad prefer adding the cloth panels. 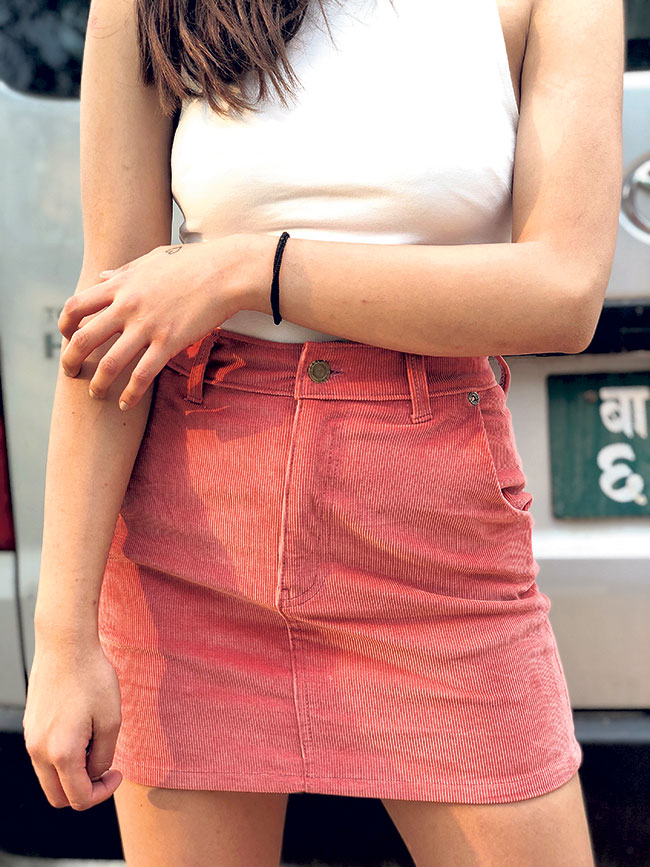 BlushBaby is the first product from Kāma and it’s also the first product from their debut collection ‘Basanta’. It’s a simple short skirt – with a subtle quirky alteration – in a blush pink color that can be paired with any almost any top. Made out of stretchy corduroy fabric, this is the perfect summer bottom that is easy to style and never fails to make you look stylish. 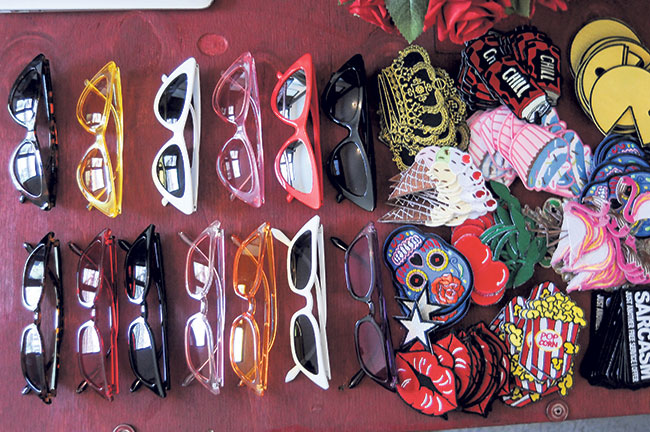 Both of these products are not Kāma’s in-house products. They are all imported from overseas and, according to Shailya, they did it because of their customers’ popular demand. “When we styled our products for Instagram pictures, we got a number of comments asking us if we sell the sunglasses the models are wearing. Aayush and Adhishree are also really into customizing their clothing with patches and their friends have been requesting us to sell patches too,” she says. The Kāma team has named the bigger glasses ‘The Cat Eye’ and the smaller ones ‘The Feline’. 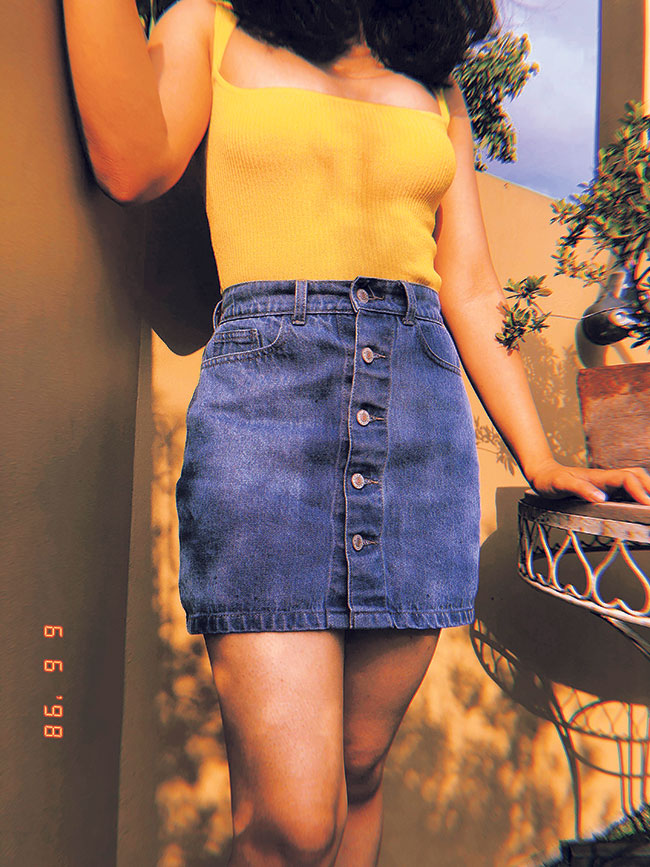 With a lot of old school styles making a comeback in the fashion industry, Kāma’s 90’sBaby skirt brings back the voguish button down skirt that was all the rage in the 90’s. It has full buttons lined up vertically in the front. But rather than making it an A-line skirt – the original 90’s silhouette – 90’sBaby has a slight modern twist with its body hugging fit. 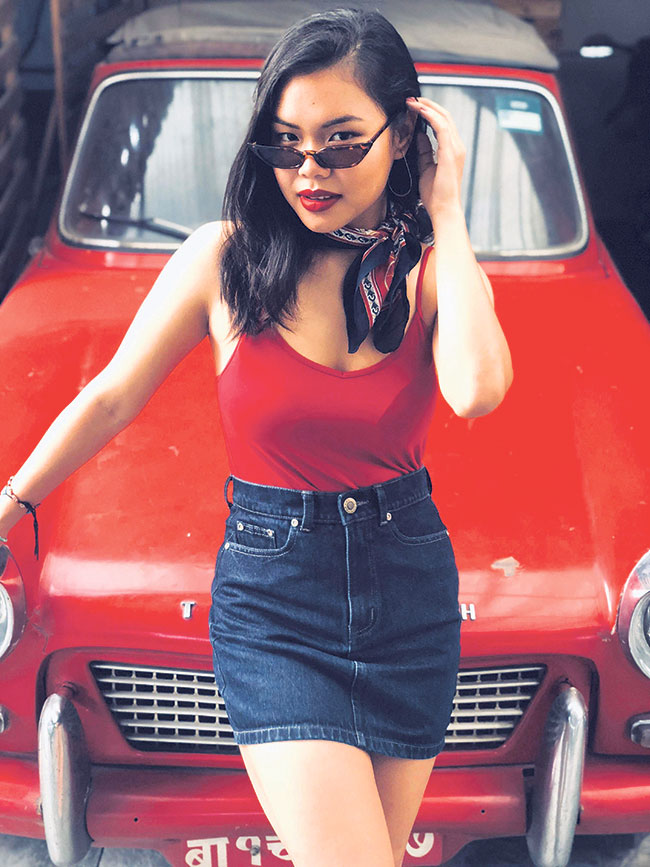 RetroBaby is another basic skirt with a classic silhouette that never goes out of style. It’s called RetroBaby because skirts with similar silhouettes and style were highly popular back in the 60’s disco era. Kāma came out with three editions of RetroBaby for ‘Basanta’: night, sky, and storm. Night is the version made in a dark hue of blue denim, sky is a light blue washed denim, and storm is a slightly grey tinted wash denim.