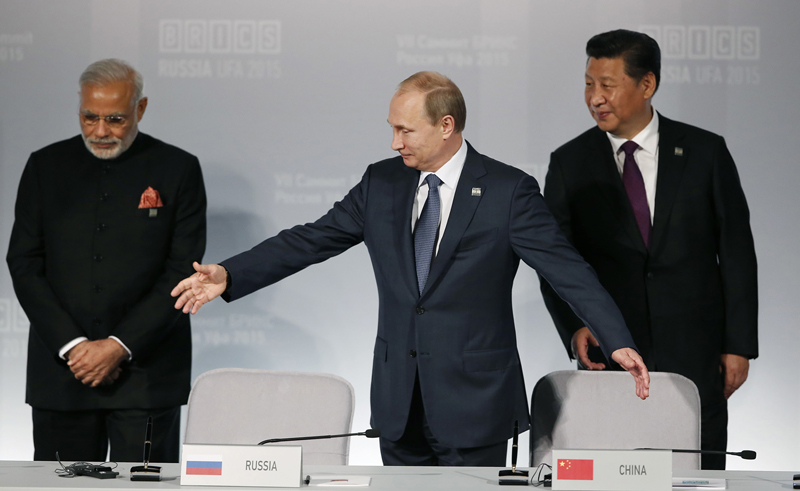 NEW DELHI, Oct 13: Prime Minister Narendra Modi will look to reinvigorate the BRICS group of emerging nations at a summit this weekend with India seen as a bright spot in a bloc whose clout has been undermined by economic woes.

BRICS, a club made up of Brazil, Russia, India, China and South Africa, was formed in 2011 with the aim of using its growing economic and political influence to challenge Western hegemony.

The nations, with a joint estimated GDP of $16 trillion, set up their own bank in parallel to the Washington-based International Monetary Fund and World Bank and hold summits rivalling the G7 forum.

But the countries, accounting for 53 per cent of world population, have been hit by falling global demand and lower commodity prices, while several have also been mired in corruption scandals.

Russia and Brazil have fallen into recession recently, South Africa only just managed to avoid the same fate last month while China’s economy, the recent engine of world growth, has slowed sharply.

India, by contrast, is now the world’s fastest-growing major economy in an otherwise gloomy environment and its GDP is expected to grow 7.6 per cent in 2016-17.

Indian foreign ministry official Amar Sinha said the leaders would debate “global growth prospects, the role of BRICS in leading this global growth and our contributions to it”.

He also confirmed regional security and climate change were on the agenda while Russia is expecting talks on Syria.

President Vladimir Putin’s office said in a statement that “international terrorism and the Syria peace process” would be discussed as Moscow faces international anger over its airstrikes in support of the Assad regime.

Some of the more substantive talks are expected at bilaterals on the sidelines of the summit in the tourist state of Goa, with Modi expected to separately meet China’s President Xi Jinping and Putin.

Brazil’s new President Michel Temer, who replaced impeached Dilma Rousseff, will look to such meetings to boost trade ties and help drag his country out of its worst recession in half a century.

The summit comes amid some scepticism about the future of BRICS, especially given India’s efforts to reach out to the US and Europe since Modi, a one-time pariah of the West, came to power in 2014.

Eswar Prasad, professor of trade and economics at Cornell University in the United States, said BRICS had been weakened by its collective burdens.

“The economic troubles faced by many members of the BRICS group have reduced its potency and influence in the world economy,” he told AFP.

Prasad said BRICS needed to focus on a global issue such as pushing back against mounting anti-globalisation rhetoric to stay relevant.

“Given its sheer size and continued significant contribution to global growth, this group could have some clout if it acted in concert in dealing with issues of global governance and the international monetary system.”

“India needs to tread with caution and avoid all controversial issues that would lead to friction,” Nataraj wrote in the Financial Express.

India will also be looking for BRICS to condemn recent cross-border attacks blamed on militants in Pakistan that have spiked tensions between the neighbours, according to local media.

Analysts, however, are sceptical of India’s chances of securing a joint condemnation given China’s strong diplomatic support for Pakistan and Russia’s efforts to forge closer defence ties with Islamabad.

Taking place at the same time in Goa is a meeting of heads of a seven-nation grouping called BIMSTEC loosely based around the Bay of Bengal.

China said on Monday that “no country should pursue its own political gains in the name of counterterrorism” in what India’s jingoist media said appeared to be a reference to New Delhi’s global campaign to get Pakistan declared a ‘pariah’.

China’s Vice Foreign Minister Li Baodong said no country should have double standards on terrorism or use it for political gains. Though he didn’t name any country, the Times of India newspaper said Beijing “added insult to injury by accusing New Delhi”.

Li was speaking to reporters on President Xi Jinping’s upcoming visit to India for the 8th BRICS summit in Goa on October 15 and 16. The BRICS group of emerging nations includes Brazil, Russia, India, China and South Africa.

“There should be no double standards on terrorism nor should one pursue its own political gains in the name of counterterrorism,” Li said while replying to a question on criticism about China’s move to stall India’s bid for a UN ban on Maulana Masood Azhar, the head of Jaish-e-Muhammad militant group, which New Delhi blames for being behind the January attack on its air force base in Pathankot.

“Counterterrorism, it is also the important area of cooperation among BRICS on political security. Cooperation on this front will enhance BRICS coordination and contribute to world peace and security,” he said.

He said China’s position on counterterrorism is consistent and that “China opposes all forms of terrorism”.

China’s vice foreign minister also said that his country was willing to discuss ‘possibilities’ with India on its bid to become a fully-fledged member of the Nuclear Suppliers Group (NSG).

India last month said it had held ‘substantive’ talks with China in its attempt to join the NSG, a 48-member grouping of countries that trades in civil nuclear technology. Indian Prime Minister Narendra Modi is campaigning to join the NSG to back a multibillion-dollar drive to build nuclear power plants in partnership with Russia, the United States and France, and reduce India’s reliance on polluting fossil fuels.

Yet his bid to win accession to the group, founded in response to India’s first atomic weapons test in 1974, has failed to win over strategic rival China, which enjoys a de facto veto because it operates by consensus.

Li said new NSG members needed to be agreed upon by all existing members. “These rules were not set by China,” Li said. “On the issue of joining the NSG, China and India have all along had very good communications, and [China] is willing to have further communications with the Indian side, to increase consensus,” he said.

“On this, China is willing to jointly explore all kinds of possibilities with India, but this must accord with the charter of the NSG, and certain rules need to be respected by all sides,” Li said, without elaborating.

The nuclear Non-Proliferation Treaty (NPT) recognises the five permanent members of the United Nations Security Council – the United States, Russia, China, Britain and France – as nuclear weapons powers but not others. India has ruled out signing the NPT but says its track record of non-proliferation should entitle it to join the Nuclear Suppliers Group.

India was granted an NSG waiver in 2008 that allows it to engage in nuclear commerce but deprives it of a vote in the organisation’s decision-making.

KATHMANDU, May 16: The government has expedited preparations for the visit of Prime Minister KP Oli to China in the third... Read More...

Four arrested with Red Panda hide, two others with musk
15 hours ago