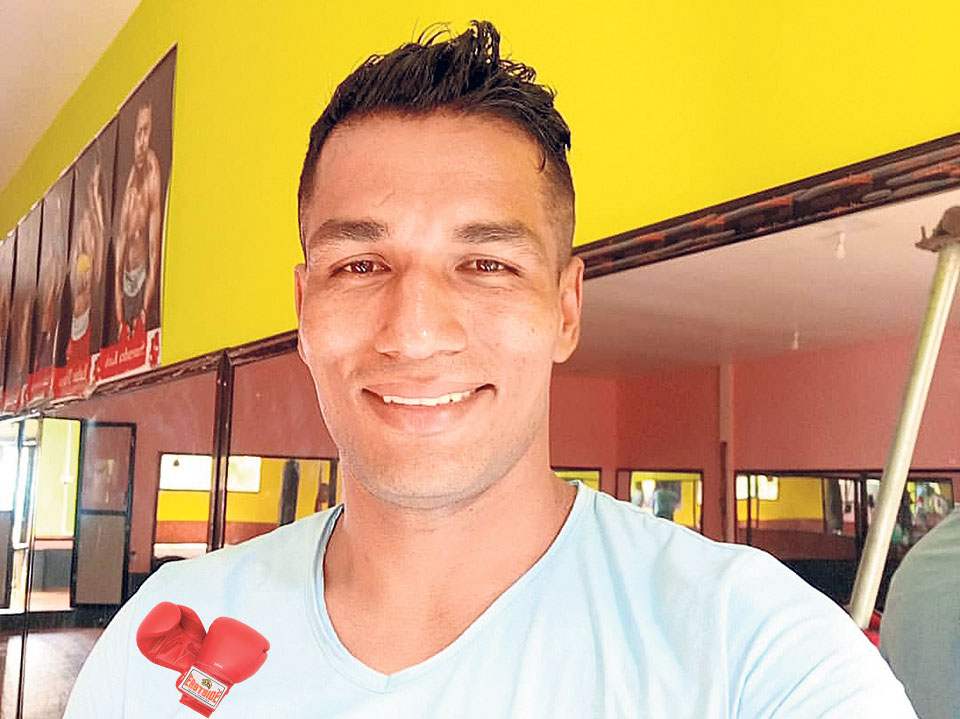 Basnet used to play all sorts of sports like volleyball, wrestling, and boxing on a national level but he took to boxing after realizing he wasn’t as good at it as he was in other sports. “In 2009, I lost a boxing match and that was a real blow to my self esteem. So I chose to focus on it and went to Haryana and Mumbai to train,” he says.

It was in these cities where he trained and played local games and won many medals. He won boxing championships in Darjeeling, Mumbai, and Maharashtra. He also won the All India Interclub Championship and was awarded as the Best Player in 2010.

Basnet says he returned to Nepal because this is where his heart was but speaking up against corruption and nepotism in the Nepali boxing scene led to a three-year suspension. However, he did not lose heart. He chose to train further and took up boxing with a passion like never before.

“When I look back, I feel the suspension was a good thing. It gave me the push needed to prove myself. I became focused and determined,” he says.

The sports sector in Nepal is not as developed as it is in other countries. Basnet says that the young generation of sportsmen has the capabilities needed to represent Nepal in the international arena but they don’t receive the support required. Instead, they are made to question if devoting their life to a particular sport is actually a mistake. “Like any other sports, there is no secure future in Nepali boxing. When I first decided to pursue boxing as a profession my parents were constantly worried about my future,” he says.

Boxing has, however, changed his life and given Basnet a new identity. “When I meet other boxers, they feel like family to me. Boxing has also taught me many life lessons. It has increased my physical fitness, confidence, and public relation among other things,” he says adding that he feels he has better control over his mind, body, and emotions today than ever before.

“I started boxing when I was just 16 years old. So, I believe youths should be highly encouraged in boxing. They have the frustration and aggression needed to pursue this sport. I believe channeling those emotions towards a sport can be highly beneficial for them,” he explains.

Basnet claims to be inspired by American professional boxer Rocky Marciano. He says that watching Marciano has taught him how to get into a strong mind frame before entering the ring to face the opponent. Opponents, he says, are people who motivate us to better ourselves. “We learn new techniques from our opponents and we must take them as teachers in a way. Our opponents can teach us how to develop a strong mind and work well under pressure,” he says.

Basnet also feels that Nepali women too should be highly encouraged to take up boxing and self-defense classes. He believes learning to box can instill confidence in them as well as teach them to protect themselves, which is definitely an important skill.

“Boxing can teach people a thing or two about becoming mentally and physically strong. And I’m not just talking about women here,” says Basnet adding that since there are very few women in professional boxing in Nepal, more women taking it up would definitely be a good thing for the sport.

Talking about the boxing scene in the country, Basnet laments that Nepal still follows the 90s training and practice methods. This, he says, is unfortunate because the sport has made a lot of progress in the rest of the world and it’s difficult for Nepali players to keep up. He further expresses his disapproval of the fact that the government doesn’t seem to give a lot of priority to sports in general, let alone boxing in particular.

“I believe many Nepali athletes and sportsmen/women have what it takes to perform really well in the international arena but because they lack funding or the platform, they are unable to do so,” he says. According to Basnet, many young players have to take up side jobs as they are unable to sustain themselves through just sports.

“It’s safe to say that a lot of young sportspeople are demotivated by this,” he says adding that there’s a need to come up with a vision and a plan for positive change in this regard.

Basnet himself is determined to do whatever it takes to develop the boxing sector and make it prosper. And currently the chairman of Nepal Professional Boxing Commission, he believes he has the power to do so. The organization, he says, wants to promote boxing and give enough opportunities and platforms to those who want to pursue it as a profession. “And I believe doing that is the first step in taking the sport to greater heights,” he concludes.

LALITPUR, Dec 9: Nepal will have a chance to end the 20 years of excruciating wait for the boxing glory when... Read More...

KATHMANDU, May 30: Nepal Boxing Association (NBA), on Tuesday, has unveiled its calendar for the year 2017 which includes organizing... Read More...