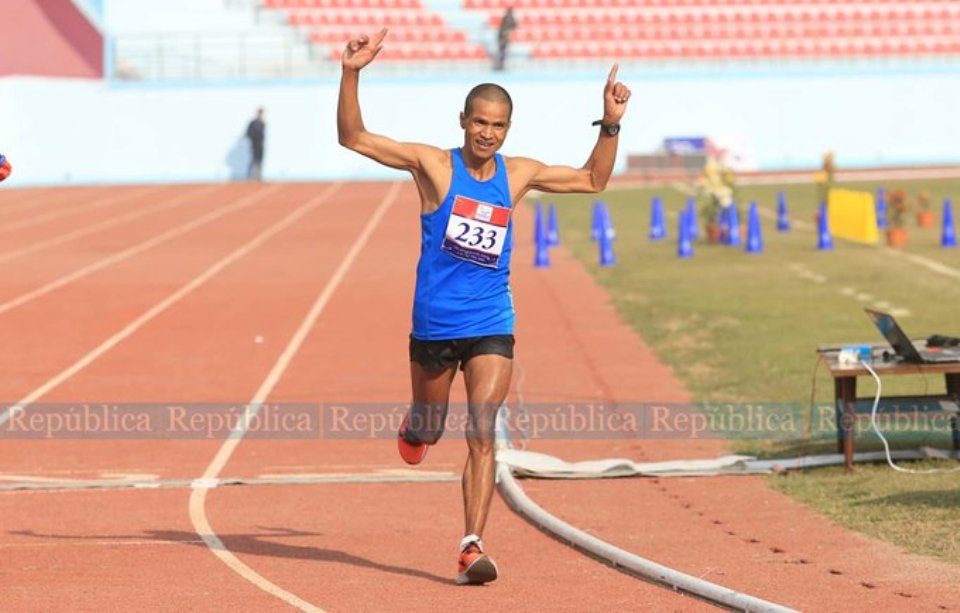 When the information spreading that a certain Kiran Singh Bogati was leading the race for the men’s marathon, many were in disbelief. The disbelief was mainly flowing through with Nepal failing to win a gold medal in marathon since Tika Bogati bagged the top-tier medal in 1995.

But, when Bogati finally came through the Dasharath Stadium main gate and into the running track, there were applauds all through the stadium and the fans roared at the eventual success.
‘Nepal, Nepal’ was the roar rather than anyone screaming Bogati’s name.
Bogati, however, was not concerned with that. He was hopeful of winning the gold.
“This is the very first success of my career. This is my first gold medal in marathon,” he expressed. “I used to finish fourth, fifth and even sixth. I stood third in National Games somehow, but I took over two hours to reach that.”

It was a stunning win for Bogati, who was not a known face for many, and he gives all the credit to runner Gopi Chand Parki, who on Friday won the gold in the men’s 5,000 meters run.
“All the credit to my success goes to Parki. He has been advising me since I started running and he taught me what to do in every step,” Bogati expressed his gratitude.
Bogati, who pushed India’s Rashpal Singh to a silver with a timing of 2:21.57 minutes, is not done with this achievement.

“My target is certainly to better my timing in every tournament I play in. I timed 22 minutes in the first time, now I have clocked 21. So, the main target is to shorten my timings from 20 to 18 and do even better.” In the category, India’s Shre Singh won the bronze medal covering the distance in 2:21.57 minutes, while the other Nepali runner Hom Lal Shrestha finished fourth in 2:24.31 minutes.
Bogati won the race by only 40 seconds, but his hardwork was the reason for that. Serving as an assistant head constable at the Armed Police Force, Bogati, 34, said that he played two selection rounds prior to the tournament to better himself.

“I stayed in the closed camp two months prior to the Games. I worked really hard for that. There were two selection rounds,” Bogati furthered. “I became third in one with the timing of around two hours and 15 minutes, while I better the second with only an hour and around 58 minutes.”

Likewise, Nepal’s Pushpa Bhandari won the silver to become the first women to win the medal in Nepali women’s marathon. She clocked 2:50.11 minutes to claim the medal, but finished behind Sri Lanka’s Hurina Kesara Wijayaratne, who timed 2:41.24 minutes to win the gold.
Also, Nepal’s Som Bahadur Kumal won the bronze medal in men’s 800 meters run with the timing of 1:51.44 minutes. Sri Lanka’s Indunil Madusha and India’s Mohammed Afsal won silver and bronze medals respectively.
India, on the day, was unable to win any gold medal.

Sri Lanka, India
go neck-to-neck
Sri Lanka clinched the battle against India for the most golds in the competition with 14 over India’s 13.

It was a contest of who could do better everyday as both the teams winning a series of gold medals each day with the exception of Pakistan, Nepal, Bangladesh and the Maldives bagging some.
Sri Lanka also won 12 silvers and 11 bronzes, while India added 23 silvers and 13 bronzes to finish first and second on overally medal tally.

Pakistan won five golds to stand third, while Nepal was fourth with three golds. Maldives won one, while Bangladesh and Bhutan were
gold-less.

KATHMANDU, Dec 7: Nepal’s hopes of winning gold medal in cricket was dashed after a 44-run defeat against Bangladesh U-23... Read More...